Wonderwall.com is gearing up for the 2021 Emmys on Sept. 29 by taking a look back at some of the most buzzed-about looks of years past. Keep reading to relive some of the annual award show's most unforgettable fashion moments, starting with this one that was on many worst dressed lists in 2014. Lena Dunham arrived in this tiered ombre-pink confection from Giambattista Valli that year, to the chagrin of fashion followers. The top started off strangely with a collared neckline and then gave way to the frothy tulle skirt for a massive fashion miss.

Remember this one? We still think about that gorgeous green gown Zendaya wore to the 71st Annual Emmy Awards in 2019. The "Euphoria" star topped many a best dressed list that year in a showstopping dark green Vera Wang design featuring a sleek boned corset-style bodice that gave way to a silky skirt with a thigh-high slit that showed off her matching green Brian Atwood heels.

Kerry Washington showed off her baby bump at the 2016 Primetime Emmys. The actress donned this sleek black Brandon Maxwell design — complete with cut-outs to show off her belly! — while pregnant with her second child at that year's ceremony.

Blake Lively was a style standout back in 2009. The "Gossip Girl" star arrived in this slinky Atelier Versace number, which featured a plunging neckline and super high slit up the front, which helped show off her tan peep-toe Christian Louboutins.

Yikes! This Armani Prive pick from the usually stylish Sarah Paulson was surprising back in 2014. The star's strapless design featured a whole lot of tulle with an inexplicable red polka dot detail throughout.

"Crazy Ex-Girlfriend" star Rachel Bloom looked absolutely lovely in a lacy black Gucci gown during the 2017 Emmys. But that's not what got people talking. During a red carpet interview with Giuliana Rancic, the six-time Emmy nominee revealed that she actually bought the dress herself off the rack — "Because Gucci's not lending me a dress!" she quipped. "I love it. And I can resell it. I'm now at the place where I can afford it," she said. "I've said in an interview before, 'Oh, sometimes it's hard to get places to lend me dresses because I'm not like, a size zero,' but I can afford it, so it's OK." She then advised viewers at home to "take a look on The RealReal for this dress tomorrow!"

Heidi Klum delivered a major fashion flop with her "Big Bird" dress — a canary yellow asymmetrical Versace frock with one sleeve and a sheer skirt — during the 2015 Emmys. Sadly for the supermodel, it's one of the worst looks in the award show's history.

Ahead of her time! Halle Berry attended the 1999 Emmys in these black sparkly coordinates. The top half featured a cropped spaghetti strapped tank with coral embellishments and the bottom was a full skirt with subtle sparkly embroidery along the top and at the hemline.

Tracee Ellis Ross was a vision in Valentino at the 2018 Primetime Emmys. The star stood out on the carpet that year in this hot pink Valentino number with dramatic, oversized sleeves and a full ball gown skirt.

Hot mama! Hayden Panettiere dazzled in a Lorena Sarbu gown with a plunging neckline while pregnant with her daughter, Kaya Klitschko, during the 2014 Emmys. It's one of the greatest maternity style moments in red carpet history!

Rainbow stripes aren't the best choice for a classic Emmy look. Patricia Heaton learned this the hard way back in 2004, when she turned up on the carpet in this sleeveless multi-colored striped disaster.

January Jones topped many best dressed lists after the 2010 Emmys after arriving in a bold blue Versace gown comprised of silk-satin petals. In the years since she donned this unforgettable futuristic frock, it's become one of the annual event's most instantly recognizable looks!

Eva Longoria took a major fashion risk by wearing a knee-length Marchesa dress with a big bow across the bodice and a fringed skirt to the 2008 Emmys. It may not have been the best look of the day, but it was certainly the most memorable!

Another crop top! Calista Flockhart arrived at the 1999 Primetime Emmy Awards in this surprising combo that was a polarizing pick — a white button down tied up above her navel and a pretty gold floor-length skirt.

Sarah Jessica Parker ruffled many fashionistas' feathers when she donned this pink plumage-embellished ballerina dress by Oscar de la Renta — and accessorized with a corsage armband — during the 2000 Emmys. Fashion critics might have loathed this look at the time, but it's now one of the most iconic award show fashion moments ever.

Back in 1992 Cindy Crawford rocked this funky frock at the Primetime Emmys — a black and white getup that included a bustier bodice, a fitted skirt with a slit up the side, cutouts and long sleeves and topped off with the strange choice of a beret. 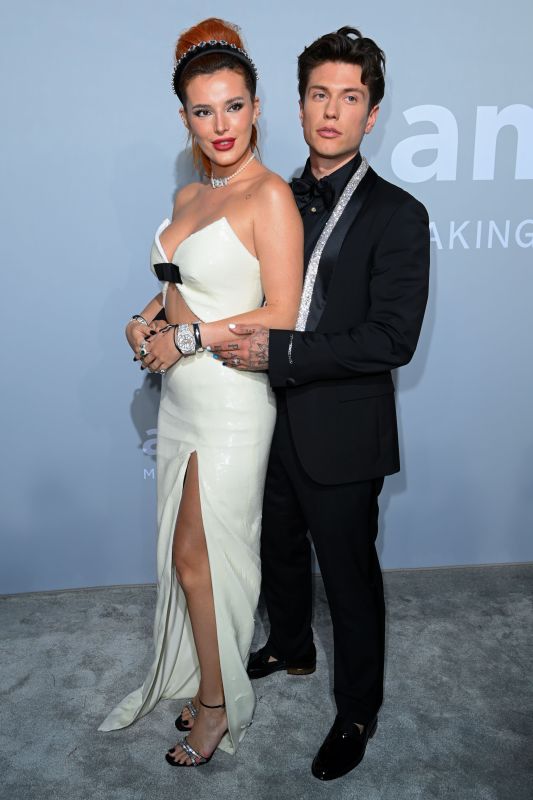