Does Rihanna have a new guy?

Rihanna's Met Gala may have ended with a romantic spark. According to the New York Post, the singer spent much of the afterparty she hosted at 10ak hanging out with Miles Chamley-Watson, a British-born, Philadelphia-based Olympic fencer who was named the Individual Foil World Champion in 2013. "It was like they were a new couple," said one partygoer. "She was canoodling and getting chummy. They sat together at the ball and partied at 1Oak until the place closed at 7 a.m." Rihanna split with Drake again last year because she reportedly didn't want to be tied down.

John Legend kicks off his Darkness and Light tour in less than two weeks, but that didn't stop him from traveling to Louisiana on Wednesday, May 3, to speak encourage members of Gov. John Bel Edwards' staff and the House judiciary committee to make drastic changes to the way the state deals with criminal justice and prisons. "The #lalege can make history this session by passing #criminaljustice legislation," John tweeted during his visit. "Let's come together on #prisonreformla." His trip comes after it was revealed the Baton Rouge police officers involved with holding down Alton Sterling and shooting him multiple times at close range last year won't be prosecuted for his death.

"On. Repeat. Til. The. End. Of. Time‼️‼️‼️‼️‼️‼️❗️ @haimtheband." That's how Taylor Swift made her return to social media this week after avoiding the selfie-verse for two months. She reappeared on Instagram to promote her friends in Haim's new single, "Want You Back." Noting Taylor's favorite number is 13, JustJared reports she shared a screenshot of the new tune exactly 13 seconds in. But her fans seemed more interested in the fact Taylor had resurfaced than the the music, posting a surge of comments to the effect of "she's alive!"

Joseph Gordon Levitt and his wife, Tasha McCauley, are expecting their second child. A rep confirmed the news to People this week after paparazzi spotted Tasha's growing bump as the couple stepped out for lunch in Beverly Hills. If the way they handled news of their first son's birth is any indication, though, JGL's unlikely to share much about the new baby. "My son … he hasn't made the choice to be in the public eye, and that's a choice that I would like him to be able to make when he's older, when he can think about these kinds of things and make that decision for himself," he said in 2015. "So, for now, I'm just a protective dad, and I want to protect his privacy."

Rumors that Kelly Ripa wanted Andy Cohen to replace Michael Strahan on "Live!" were put to bed for good this week when Andy chatted with Us Weekly about the news Ryan Seacrest would be joining Kelly on her show. "I think it's good. He's a star, he's an adult, they're equals, I think it's great for Kelly," Andy said. "She's had a lot on her plate for the last year doing that show alone, and so I think it's great." As for whispers he could have landed the gig rather than Ryan? "First of all, they never asked, and second of all, I couldn't do it," Andy said. "I'm exclusive to NBC Universal and they let me do Love Connection for Fox, but that was a week of work. This is a real job. I would never sleep again and I don't already."

Life is different for Kim Kardashian West since she was robbed at gunpoint in Paris last year. "I can live my life, but just on edge," she tells Kourtney Kardashian in a preview from the new episode of "Keeping Up With the Kardashians" (via E! News). "I honestly never thought that they would catch the robbers," she continues/ "I just thought so much time has gone on and I didn't really realize how diligent the French police were being and just all the hard work they were really putting into it." Despite the successful efforts of the police, though, Kim was changed by the experience. "To find out that there were so many people involved, hearing detail after detail, really just opened up a whole different perspective for me of feeling safe," she says. Worse, she says, is that some of those involved may have been "close" to her, which makes she says makes it impossible to develop trust with anyone. "[It] really sucks."

If you build it … Liam Neeson will come? When the employees at Big Star Sandwich near Vancouver heard the actor was in town filming "Hard Power," they came up with some bait to try to lure him into their shop in case he happened to walk by — bait in the form of free food. And much to their excitement, Liam took it within a few hours. According to E! News, on the morning of Tuesday, May 2, Kyle Gus and Serge Patoka wrote "Liam Neeson eats here for free" on one side of on their sidewalk sign and, referencing the actor's turn in "Taken," "come in and get Taken" on the other. By the afternoon, they were taking selfies with the actor and posting them on Facebook. "We had no idea he would be in our vicinity," said the shop's director of operations. "I assume someone on the film crew saw the sign and got it back to him."

A year after they revealed their engagement at the 2016 Met Gala, Kate Upton and Justin Verlander are starting to finalize some details about their wedding plans. Asked about flowers, she recently told Martha Stewart Weddings, "I have favorites, but I don't know what I'll have for the wedding day yet I just know I want a lot of flowers. And I know I want the petals already down by the time my niece, who will be my flower girl, walks down the aisle." Unfortunately, it sounds like Kate will enjoy the petals more than her fiance. "Justin has terrible allergies!" she said. "He'll have to take an allergy pill." The pair's wedding planner is Lisa Vorce, who planned Chrissy Teigen and John Legend's 2013 wedding in Italy.

Miley Cyrus on Liam Hemsworth: 'We had to refall for each other'

When Miley Cyrus and Liam Hemsworth called off their engagement in 2013, it wasn't immediately clear why they needed to end things. Now, two years after they reunited, Miley's ready to open up about what happened, especially in light of her new love song, "Malibu," which details a couple's "brand new start" in Malibu, where Miley and Liam live with their growing brood of pets. "I needed to change so much. And changing with someone else not changing like that is too hard. Suddenly you're like, 'I don't recognize you anymore.' We had to refall for each other," she explains in the new issue of Billboard (via Us Weekly). These days, Miley's off the booze and marijuana she openly embraced in the last few years. "I haven't smoked weed in three weeks, which is the longest I've ever [gone without it]," she says. "I'm not doing drugs, I'm not drinking, I'm completely clean right now! That was just something that I wanted to do." The singer, who's finishing up her sixth album, also admits she and Liam have different approaches to gender and their own sexuality, issues Miley's spoken openly about in the past, saying she's "gender fluid:" "I'm with a straight dude. But he's always like, 'Well, don't call me that! I ask him sometimes, 'Do you like being a boy?' And he's like, 'I don't really think about it.' And that's crazy to me, because I think about being a girl all the time. I'm always like, 'It's weird that I'm a girl, because I just don't feel like a girl, and I don't feel like a boy. I just feel like nothing.' So when someone's too ­masculine, that really grosses me out."

Congrats are in order for Joe Scarborough and Mika Brzezinski! After keeping their rumored romance on the DL for ages, the couple took a trip to the south of France and Monaco last weekend for Mika's 50th birthday. But sources tell the New York Post they ended up with more than just a birthday to celebrate. Joe, 54, reportedly asked Mika to marry him at Bar Bellini at the Hotel du Cap-Eden-Roc in Antibes. "Joe got down on one knee and proposed old-fashioned-style with a ring. Of course, Mika accepted. They came back from the trip on Cloud Nine." said a source. "There are no wedding plans as of yet, they are just telling their families the happy news." 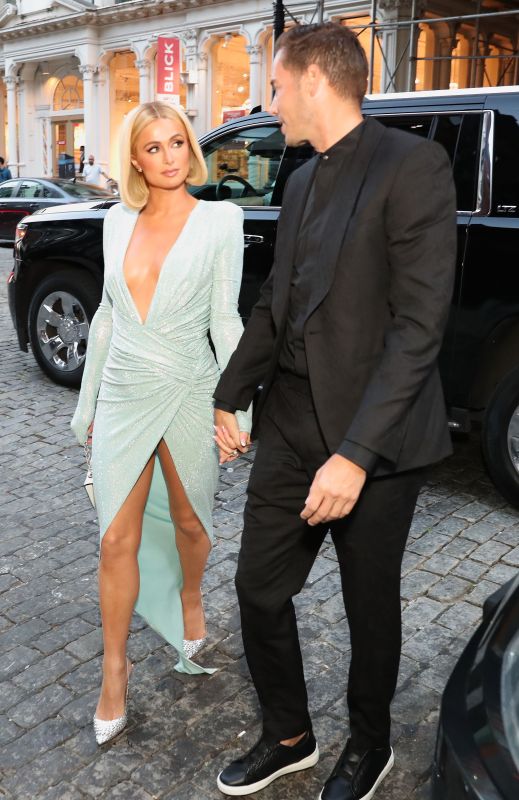