Fashion before passion? Ashley Olsen, 30, has reportedly called time on her relationship with 58-year-old fiancier Richard Sachs so she can focus instead on The Row and Elizabeth and James labels she shares with her sister, Mary-Kate Olsen, as well as other design projects. It seems the pair left things on good terms when they ended their relationship of five months, which included a recent vacation to St. Barts with Mary-Kate and her husband, Oliver Sarkozy (who at 47 is almost two decades older than his wife). According to the Daily Mail, Ashley and Richard stepped out in New York's Chinatown neighborhood for lunch after the split. Other than the occasional paparazzi photo, Ashley and Mary-Kate have managed to keep their personal lives mostly under wraps, opting to speak to press only when it concerns their fashion lines. "Because we don't dive into that whole world [of social media] and we don't have Facebook, we've never been connected to our fans in that way," Ashley recently told Net-a-Porter's The Edit. "We've stayed quite sheltered in that sense."

Prince Harry will probably be at Serena Williams' wedding

Looks like another wedding date is on the horizon for Prince Harry and Meghan Markle. Serena Williams recently announced her engagement to Alexis Ohanian and when the couple says "I do," there's a good chance Prince Harry will be among the wedding celebrants, since Serena and "Suits" actress Meghan Markle are good friends. "Serena has told her sister and some pro friends Meghan is definitely getting a 'plus one' for Harry," a source tells The Sun, adding that Serena's tennis world friends are now "even more desperate to ensure they score an invite for themselves so they can party with royalty." Harry and Megan were spotted at a friends' wedding in Jamaica earlier this month.

GOOP fans and critics alike will be delighted to learn Gwyneth Paltrow is taking her website into the vitamin market. Whether her website's staff wants to follow her there remains to be seen. The New Yorker (via the New York Post) reports Gwyneth is now the CEO of GOOP, having been installed in the role following former CEO Lisa Gersh's departure in 2016. It sounds as if there may have been some growing pains since then. In a discussion about whether the GOOP newsletter should "refer to her as CEO," the actress reportedly had to defend herself. "I mean, the board did make me CEO. It wasn't my fault. It wasn't my decision," she said in a meeting described in the magazine. "Ugh," she added, "you guys are giving me agita." The new vitamins will have names like "Why Am I So Effing Tired" and "High School Genes." Gwyneth reportedly axed an idea to sell vitamins that could be taken intravenously, saying, "I think mainlining vitamins might be going a bit far, even for us."

Three years after Robin Williams' death, his peers are still thanking him publicly for his contributions to the entertainment industry. Jessica Chastain is among them. According to the New York Post, the actress told the audience at a screening of her new film, "The Zookeeper's Wife" at the SAG-AFTRA Robin Williams theater in New York on Monday, March 20, that she'd won one of the two Juilliard scholarships the comic awarded every year. "She was saying she sadly never got a chance to meet him," an audience member told the Post, "but it meant so much to her."

Shia LaBeaouf is hoping the fourth move will be the charm for his He Will Not Divide Us installation, which is slated to relocate to Liverpool, England. The anti-Donald Trump art piece has been on view in an "undisclosed location," according to JustJared, since it was moved from New Mexico because of what's been described as Neo-Nazi "disruption." Before New Mexico, the piece was installed in New York, where it was intended to stay for the president's four years in office. Disruption occurred there, too, though, and Shia sought a safer home for it. "Events have shown that America is simply not safe enough for this artwork to exist," he said in a statement this week. "We are proud to be continuing the project at FACT, an arts center at the heart of the community."

Somebody's got a new 'do! Chloe Grace Moretz nixed her long, light brown waves for a short platinum bob this month and photos on her Instagram showing her wearing the cut in a sleeked back look suggest she's having fun with the results. According to Us Weekly, colorist Lorri Goddard handled bleach duties for the star, who recently returned to Los Angeles from a trip to Austin for SXSW with her brother.

Lily Collins on how her parents influence her romantic choices

After growing up with a dad who wasn't around as much as she would have liked, Lily Collins is coming to terms with residual negative feelings from her youth, forgiving her father and feeling hopeful about the future. She opens up about her relationship with Phil Collins, who divorced her mom two years after Lily was born and married five times in all, in her new book, "Unfiltered: No Shame, No Regrets, Just Me." The actress stopped by "The Talk" this week to give viewers more insight into the memoir. She also described what she looks for in men — and it sounds like there are hints of her famous, if often unavailable father, in her version of Mr. Right. "I find that I'm really attracted to mysterious creatives, and I love people that are able to put their emotions out there for not just the world to see, but just that are giving of their emotions, but a little bit mysterious and elusive as well," she said (via E! News). As for her mom, Jill Tavelman? "And my mom is such a strong independent strong-willed woman and she always taught me to accept my worth for how I viewed myself and female empowerment," Lily said, "and it's ok to be independent and also need someone at the same time. I kinda get to be both."

Charlie Hunnam's unexpected exit from "Fifty Shades of Grey" a few years back confused a lot of folks, even after he blamed schedule conflicts and told V Man magazine canceling on his friend, director Sam Taylor-Johnson, "was the most emotionally destructive and difficult thing that I've ever had to deal with professionally." With a new edition of the franchise in the works, Charlie says he's still too raw from the ordeal of backing out to watch the movies. "I developed a friendship with [Sam], but that was a somewhat traumatic experience for me. I didn't want to open that wound," he told Elle (via Vulture). Something else might be going on, too, according to E! News — namely, Charlie's germaphobia, which he confessed had been an issue since childhood. "Everyone thinks it's great to be an actor and get to kiss a bunch of beautiful actresses in films, but I actually hate it. I don't want to kiss anyone but my girlfriend for my whole life," he said. The notion there was more than scheduling involved makes sense, too, given something else the actor told V Man. When he told Sam he had to bail, he recalled, "we both cried our eyes out on the phone for 20 minutes." He continued: "I needed to tell her that this was not going to work… There was a lot of personal stuff going on in my life that left me on real emotional shaky ground and mentally weak. I just got myself so f—— overwhelmed and I was sort of having panic attacks about the whole thing."

They just met last month, but Elizabeth Olsen and singer-songwriter Robbie Arnett are already exclusive, according to E! News. When the pair stepped out for a smile-filled stroll in New York this week, the website reported they'd met in February when they were oth vacationing in Mexico. Calling the indie pop artist a "great guy." "They are in an exclusive relationship and Lizzie is excited about him," an insider tells E! "She deserves it. It's very new though, but they seem to like each other a lot already." 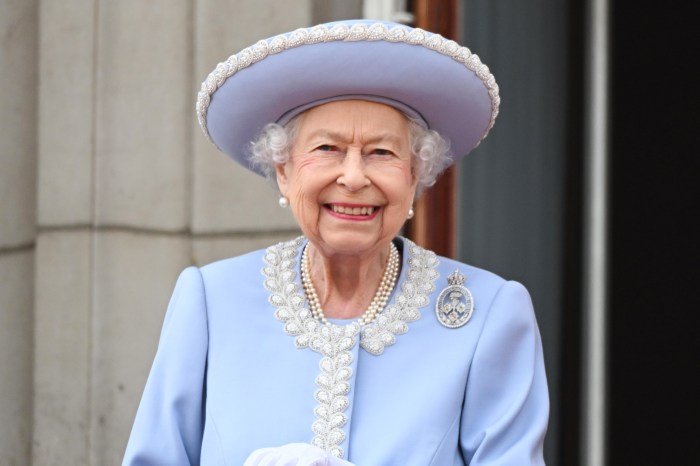