Ben Stiller and his ex, Christine Taylor, are clearly on great terms in spite of their split. On Saturday, April 6, the former couple held hands and appeared happy to have one another's company as they enjoyed a performance of "Pretty Woman: The Musical" with their kids at the Nederlander Theatre Saturday in New York City. "It was a sweet family night out," a source tells People. "The kids were glowing because they all love the theater, and Ben and Christine looked happy together, smiling and laughing and holding hands, especially during intermission. They seemed to really love the show and being around one another." Ben and Christine announced their separation in May 2017 after 18 years together as a couple. When they were spotted out together in the Big Apple last summer, an insider said they weren't back together, just "friendly and devoted parents to their kids."

RELATED: More stars who are still friendly with their exes

Diddy says he misses being checked up on by Kim Porter

For Diddy, social media seems to be helping to ease the pain he's suffered since his ex, Kim Porter, died last fall. His latest post about Kim, who died of pneumonia on Nov. 16, popped up on Instagram Stories on Sunday, April 7. "I know, I know, GET MY S*** TOGETHER!" he wrote alongside a close-up image of Kim throwing some playful side-eye at the camera (via the Daily Mail). "Message received. I miss your looks checking me," he added. Diddy and Kim share three biological children, Christian, Jessie and D'Lila, as well as Kim's son from a previous relationship, Quincy, whom Diddy adopted and raised as well. In the wake of Kim's unexpected death, the Bad Boy Records founder's children have played a key role in his grieving process as well. In January, he posted that he'd been "humbled" by his family's strength, writing, "They have led me. They brought me out of a state of deep depression. Their strength and love brought me back into the light."

Zoe Saldana believes it's time to make room for "redemption" when it comes to past mistakes made by Hollywood's power players — specifically, James Gunn. As she told Variety over the weekend, she's happy and proud the director was rehired for "Guardians of the Galaxy, Vol. 3," after offensive tweets he posted years ago surfaced, causing him to be fired. He apologized for the tweets when the resurfaced, calling them "totally failed and unfortunate efforts to be provocative," and admitting he's "regretted them for many years since" he posted them, "not just because they were stupid, not at all funny, wildly insensitive, and certainly not provocative like I had hoped, but also because they don't reflect the person I am today or have been for some time." Now that Disney's decided to bring him back on for the next edition of the film series, Zoe says, "I'm really excited, and I'm proud of Bob Iger and Alan Horn for stepping up and making a decision to reinstate James Gunn." She went on to explain why she feels he deserves a second chance. "I think the theme of redemption is a theme that we weren't ready to discuss in 2018 because it was important for women to also strive to make workplaces more ethical and more professional. Not just for women but for men, as well. But leaving that space for redemption, for error, and then coming forward with so much humility and saying, 'We acted impulsively and we're going to rectify this,' Disney is a big entity and they make content for younger audiences. You're sending a strong message to kids, and that, I commend them for it," she said. "And obviously, I'm happy to have my captain back on board because we were panicking. No other person can be like James Gunn for 'Guardians.'"

Duchess Kate isn't the only celeb whose pregnancies have been marred by hyperemesis gravidarum, the severe and persistent nausea she experienced with each of her three chidlren. TMZ reports Amber Rose was recently hospitalized for the same condition. The soon-to-be mother of two suffered from the same complication while pregnant with her first son, Sebastian, whom she shares with Wiz Khalifa. She's expecting another son with boyfriend Alexander "AE" Edwards. Sources close to Amber say she's "thrilled" about the unplanned new addition. He's reportedly due sometime near her birthday in October.

Jordyn Woods' Tristan Thompson scandal now has its own merch

In the wake of Jordyn Woods' alleged hookup with Khloe Kardashian's (now ex) boyfriend, Tristan Thompson, merch companies are using the scandal that ensued as inspiration for new products. Jordyn's mom, Elizabeth Woods, shared photos on Instagram this week showing some of the items — including a pillow with Jordyn's photo on it and the words, "I don't need your situation" — and asked followers to help her track down the makers of the products. "We are well aware that many people have been selling merch. If you are aware of any companies selling merchandise and trying to benefit from our situation, please tag them below," she wrote, according to Page Six. "We would like for the world to know that we have not authorized any of this and have not profited from any of these sales whatsoever. Thank you for all the support and love #teamigotthis." The line used on the pillow was taken from Jordyn's appearance on "Red Table Talk." Kylie Jenner, Jordyn's longtime best friend, has reportedly cut ties with her.

While Jordyn Woods and her mom navigate the fallout from Jordyn's alleged Tristan Thompson tryst, her former best friend Kylie Jenner is trying to stay positive and move forward. "When you focus on the good, the good gets better," she wrote on Instagram over the weekend. Shortly after the first post, she shared another one with more thoughts about positive thinking. "Grow through, what you go through," she wrote. Though she didn't specify what she'd "gone through" that she was hoping to "grow through," fans — and Us Weekly — suggested she was thinking about her relationship with Travis Scott. The two recently jetted off on vacation together after rumors suggested they'd been fighting about Kylie's concern Travis cheated on her while he was on tour. Travis' rep has "vehemently" denied there's any truth to the claims.

Channing Tatum checks in on rehearsals for 'Magic Mike: The Musical'

Production is in full effect for the next iteration of Channing Tatum's 2012 hit, "Magic Mike." People reports Channing recently stopped by Sunlight Studios in New York City to see how rehearsals for "Magic Mike: The Musical," are going and despite having a major hand in the show as a producer, he admitted he was nervous about interacting with the creative team behind the show and some of the dancers. "It's not that I don't want to go, I'm just really intimated by them," he says in a video clip shot by a pal or producing partner as he headed into the studio. "Look, they're so good. They're like, literally the best at what they do and I know nothing about musicals!" After the person holding the camera reminds Channing, "I don't [know anything musicals] about either, that's why we hired them," the actor and former dancer finally makes his way inside to meet everyone. "Looks amazing guys," he marvels. "Looks unbelievable." According to People, "Magic Mike: The Musical" is set to run at the Emerson Colonial Theatre in Boston from Nov. 30 through Jan. 5, 2020.

Chelsea Handler has a thing for Special Counsel Robert Mueller and she doesn't care who knows. The comic opened up about her crush on the Monday, April 8, edition of "Ellen," while discussing her new book, "Life Will Be the Death of Me," a memoir about taking time off to go to therapy and deal with the deaths of her brother and mother. She first made the revelation about Mueller in the book, explaining that he represented hope for her at a time when she was feeling so much despair. The hope, of course, was not related to her family but to a dream Mueller's investigation in Donald Trump's relationship with Russia would get him impeached. It apparently translated into a "legitimate" attraction to the man and "everything he stands for," she wrote. Speaking to Ellen DeGeneres, Chelsea explained that while at 44, Mueller, 74, might be a tad old for her, "I have daddy issues like I explain in my book," adding, "I've been attracted to older men for quite some time." There's also something physical there for Chelsea. "From what I can tell under his business attire there is a six- to eight-pack…," she semi-joked (via JustJared). "He was a marine!"

Is that it for Lisa Vanderpump's decade-long bestie-dom with Kyle Richards? The pair had a huge blowup on last week's episode of "Real Housewives of Beverly Hills," leading an alleged insider to speculate that Kyle is "very sad" about the direction of their relationship, while Lisa continues to deny she had anything to do with the Dorit Kemsley / adopted dog brouhaha known as "Puppygate." "Kyle is honestly very sad that her friendship with Lisa has ended and even all these months later, it did hurt to watch due to their history," Hollywood Life quotes a source as saying. "But Kyle, along with her cast members who have her back, felt Lisa and [her husband] Ken [Todd] were completely out of line for the way they spoke to her and are not being truthful, hence why they're all making the videos. They have no plans to stop and just want Lisa to tell the truth like they feel they are." The insider went on to say the whole cast was "waiting for last week's episode of the show " because the fighting it featured seemed likely to settle the question of Lisa's involvement in the puppy situation. Jezebel, meanwhile, maintains, "The real issue is that [Lisa] is too proud to rekindle things and [Kyle] is too anxious," pointing out that there is still plenty of time left in the season for Puppygate to be sorted out.

Felicity Huffman has taken responsibility for her role in the college admissions scandal currently playing out in a Boston courtroom. In a statement to Variety on Monday, April 8, the "Desperate Housewives" alum said: "I am in full acceptance of my guilt, and with deep regret and shame over what I have done, I accept full responsibility for my actions and will accept the consequences that stem from those actions. I am ashamed of the pain I have caused my daughter, my family, my friends, my colleagues and the educational community. I want to apologize to them and, especially, I want to apologize to the students who work hard every day to get into college, and to their parents who make tremendous sacrifices to support their children and do so honestly." She was arrested last month for allegedly paying an admissions consultant $15,000 to up her daughter's score on the SATs. Variety reports Felicity "and a dozen other parents" involved in the scandal will plead guilty. 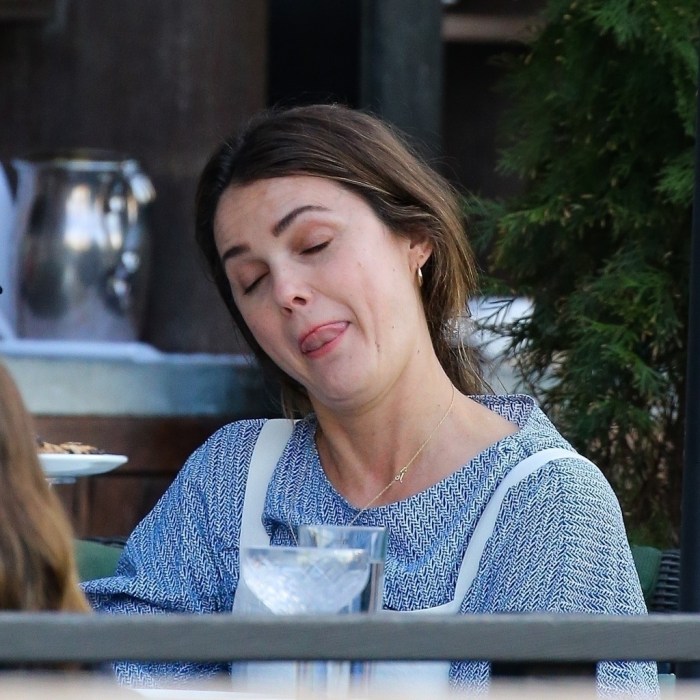