RELATED: Our favorite photos of Brad and Jen to mark what would have been their 20th wedding anniversary

Emily Ratajkowski — who announced her first pregnancy with husband Sebastian Bear-McClard in October — headed out for a hike in Los Angeles on Nov. 27.

Ben Affleck and girlfriend Ana de Armas stepped out in Los Angeles with her dog, Elvis, on March 17.

RELATED: Stars at the beach in bikinis and swimsuits in 2020

Jessica Simpson channeled Elle Woods in head-to-toe pink as she arrived at the BuzzFeed studios in New York City on Feb. 4.

Prince Harry and Duchess Meghan arrived at the Endeavour Fund Awards at Mansion House in rainy London on March 5.

Sam Hunt spoke at The Estate at Cherokee Dock in Lebanon, Tennessee, during the 2020 CMT Music Awards on Oct. 21.

Paris Hilton carried her pink dog while out and about in Los Angeles on July 6.

Kanye West and Kim Kardashian West celebrated the launch of her SKIMS line at Nordstrom NYC in New York City on Feb. 5 with a kiss.

Host Kelly Clarkson performed at the 2020 Billboard Music Awards at the Dolby Theatre in Los Angeles on Oct. 14.

Jennifer Lopez attended the 2020 American Music Awards at the Microsoft Theater in Los Angeles on Nov. 22.

John Boyega spoke in Hyde Park in London on June 3 during a peaceful protest in support of the Black Lives Matter movement after the death of George Floyd in Minneapolis at the hands of a white police officer.

Sofia Vergara arrived to tape "America's Got Talent" in Los Angeles on March 11.

Megan Fox and Machine Gun Kelly made their red carpet debut as a couple at the 2020 American Music Awards at the Microsoft Theater in Los Angeles on Nov. 22.

Billie Eilish posed with her five Grammys during the 62nd Annual Grammy Awards in Los Angeles on Jan. 26.

Maren Morris performed exclusively for Verizon Up members during the first night of her five-city virtual tour at the Ryman Auditorium in Nashville on Oct. 20.

Mike Love of The Beach Boys and John Stamos performed a CBF Productions' Concerts in Your Car show in Ventura, California, on Oct. 23.

A pregnant Lea Michele wore a mask while stepping out for a walk in Santa Monica, California, on July 14.

Joaquin Phoenix and Renee Zellweger posed with their awards for best lead actor and best lead actress during the 73rd British Academy Film Awards at Royal Albert Hall in London on Feb. 2.

Michelle Obama and Oprah Winfrey participated at "Oprah's 2020 Vision: Your Life in Focus" tour at the Barclays Center in New York City on Feb. 7.

Hillary Scott of Lady A visited virtual radio row ahead of the 55th Annual Academy of Country Music Awards at the Gaylord Opryland Resort & Convention Center in Nashville on Sept. 15.

Julia Louis-Dreyfus and Will Ferrell attended the "Downhill" film afterparty in New York City on Feb. 12.

Post Malone posed with his haul backstage at the 2020 Billboard Music Awards in Los Angeles on Oct. 14.

A pregnant Emma Roberts walked around Los Angeles in SOREL footwear on Oct. 23.

Sophia Bush took her pup Maggie for a spin on her new Bluejay electric bicycle in Los Angeles on Oct. 27.

Duchess Kate prepared to exit the starting block during a SportsAid event at the London Stadium in Stratford, England, on Feb. 26.

"Parasite" filmmaker Bong Joon-Ho — who won Oscars for best picture, best director and best screenplay that night — attended the Governors Ball, where he had them engraved, after the 92nd Annual Academy Awards in Los Angeles on Feb. 9.

Drew Barrymore struck a pose with Minnie Mouse at Disney World in Orlando, Florida, on Jan. 25.

Andy Cohen posed with Demi Lovato before their interview on SiriusXM's "Radio Andy" in Miami on Jan. 30.

Martha Stewart prepared a meal with Beyond Meat's new Beyond Breakfast Sausage in New York City on March 10.

Michael B. Jordan attended "A Night at the Drive-In" hosted by Amazon Studios and Outlier Society featuring "Black Panther" and "Creed" at the Paramount Drive-In in Los Angeles on July 15.

Michael B. Jordan and Jamie Foxx attended the "Just Mercy" film screening in London on Jan. 15.

Brooke Shields and Chris Henchy posed with daughters Rowan and Grier at the premiere of "Impractical Jokers: The Movie" at the AMC Lincoln Square 13 in New York City on Feb. 18.

Miley Cyrus's dress caught the light as she posed backstage during the MTV Video Music Awards in New York City on Aug. 30.

Julia Roberts and husband Danny Moder attended the CORE Gala benefit celebrating CORE and 10 Years of Life-Saving Work Across Haiti & Around the World at the Wiltern Theatre in Los Angeles on Jan. 15.

Cate Blanchett attended the jury photocall — she was the president in 2020 — at the 77th Annual Venice International Film Festival on Sept. 2.

Brandy performed on stage at the 2020 Billboard Music Awards in Los Angeles on Oct. 14.

Janelle Monae appeared at the "Antebellum" Rooftop Cinematic Experience event at The Grove in Los Angeles on Sept. 14.

Peter Weber and Chris Harrison promoted "The Bachelor" at the ABC TCA Winter Press Tour in Los Angeles on Jan. 8.

Jennifer Aniston presented the Emmy for best lead actress in a comedy series during the 72nd Annual Emmy Awards telecast in Los Angeles on Sept. 20.

Helen Mirren arrived at the Monte-Carlo Gala for Planetary Health in Monaco on Sept. 24.

Billy Porter arrived at the 77th Annual Golden Globe Awards at the Beverly Hilton hotel in Beverly Hills on Jan. 5.

Victoria Beckham stepped out during her brand's fashion show in London on Sept. 21.

Ellen Pompeo and T.R. Knight protested together in Los Angeles in support of Black Lives Matter on June 3.

Katie Holmes was spotted out and about in New York City on Sept. 25.

Eminem spoke at a ceremony honoring 50 Cent as he was given a star on the Hollywood Walk of Fame on Jan. 30.

Kym Johnson and Robert Herjavec posed with their twins, Haven and Hudson, at the "Mira, Royal Detective" TV show premiere in Los Angeles on March 7.

Heidi Klum flashed a peace sign while out and about in Los Angeles on March 2.

Chrissy Teigen and John Legend attended the Vanity Fair Oscar Party at the Wallis Annenberg Center for the Performing Arts in Beverly Hills on Feb. 9.

Awkwafina clutched her Golden Globe in the press room at the 77th Annual Golden Globe Awards on Jan. 5 after winning the best actress in a musical or comedy film prize for her performance in "The Farewell."

Alison Brie and husband Dave Franco attended the ArcLight Drive-In's special screening of "The Little Hours" at the Vineland Drive-In in City of Industry, California, on Aug. 19.

Sienna Miller arrived at the Monte-Carlo Gala for Planetary Health in Monaco on Sept. 24.

Lizzo sang into one of her three Grammys while posing backstage during the 62nd Annual Grammy Awards in Los Angeles on Jan. 26.

Rumer Willis and mom Demi Moore arrived at the Vanity Fair: Hollywood Calling: The Stars, The Parties and The Power Brokers bash at the Annenberg Space For Photography in Century City, California, on Feb. 4.

Elle Fanning posed during the "The Roads Not Taken" photocall during the 70th Annual Berlin International Film Festival on Feb. 26.

Claire Danes and husband Hugh Dancy attended the premiere of the eighth and final season of Showtime's "Homeland" at the Museum of Modern Art in New York City on Feb. 4.

Christina Aguilera performed during the Celebration of Life for Kobe & Gianna Bryant at the Staples Center in Los Angeles on Feb. 24.

Friends for Life Ambassador James Middleton posed with his dogs Luna, Inka, Ella and Mabel in London on Feb. 18.

Busy Philipps struck a pose while out and about in New York City on Feb. 19.

Drew Barrymore and Adam Sandler posed together at the National Board of Review Annual Awards Gala at Cipriani 42nd Street in New York City on Jan. 8.

Maisie Williams arrived at the Monte-Carlo Gala for Planetary Health in Monaco on Sept. 24.

Katy Perry and Prince Charles attended a reception for supporters of the British Asian Trust in London on Feb. 4.

Mariah Carey and Tyler Perry attended the premiere of his movie "A Fall From Grace" at Metrograph in New York City on Jan. 13.

Joe Manganiello and his dog, Bubbles, attended the "Archenemy" film screening in Montclair, California, on Oct. 7.

Katie Holmes sat in the front row of the Chloe Fall/Winter 2020 show during Paris Fashion Week on Feb. 27.

Lisa Vanderpump and Lance Bass had lunch in Beverly Hills on Jan. 15.

Jennifer Garner and her kids — Seraphina, Violet and Samuel Affleck — took their cat for a walk in their Los Angeles neighborhood on April 1.

Christina Aguilera attended the "Mulan" film premiere in Los Angeles on March 9. Though the film's release was soon pushed back due to the coronavirus pandemic, it eventually debuted on Disney+.

Mark Wahlberg was spotted out and about in Los Angeles on Jan. 23.

Leonardo DiCaprio and Sean Penn hung out at Sean's CORE Gala dinner benefit celebrating CORE and 10 Years of Life-Saving Work Across Haiti and Around the World at the Wiltern Theatre in Los Angeles on Jan. 15.

Blake Lively attended the premiere of "The Rhythm Section" in New York City on Jan. 27. 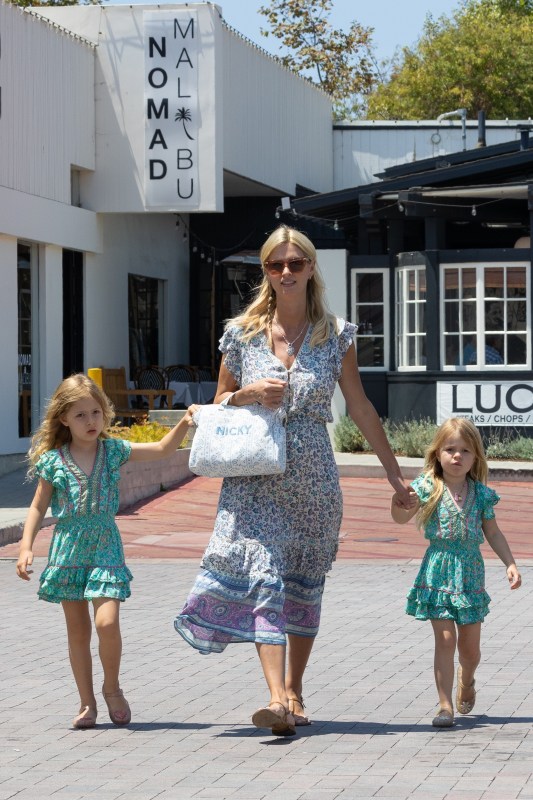 Check out some of the biggest celebrity family feuds