Jennifer Lopez soaked up the sun at 51 in a sparking plum bikini and matching Christian Dior bucket hat while on vacation in Turks and Caicos on Jan. 7, 2021. Keep reading to see more stars — at every age — exuding confidence in their bathing suits…

A week before her 57th birthday, Helen Hunt proved you're never too old for a bikini-clad day of sun, swimming and surfing. The actress hit the beach in Malibu for a bit of bodyboarding in June 2020.

Music star Lizzo was clearly feeling good as hell at 31 when she hit the beach in Rio de Janeiro, Brazil, in February 2020.

Shortly before her 62nd birthday, actress Melanie Griffith rocked a black bikini while vacationing on a luxury yacht with friends in Formentera, Spain, in July 2019.

At 45, supermodel Kate Moss slipped into a silver bikini and prepared to dive into the Mediterranean Sea while vacationing on a yacht moored off the coast of St-Tropez, France, in August 2019.

Kourtney Kardashian showed off her killer bikini bod at 39 in this yellow two-piece swimsuit while on vacation in Mexico in August 2018.

In July 2019, a 22-year-old Bella Hadid spent time at the beach while on vacation in Mykonos, Greece.

Padma Lakshmi showed off her impressive bikini bod at 48 in this red two-piece swimsuit while strolling the beach in Miami in January 2019.

A 21-year-old Bella Thorne revealed her fit figure in this aqua bikini top and denim cutoffs while spending time in Miami in February 2019.

In March 2019, Priyanka Chopra showed off her 36-year-old beach body in an emerald bikini while boating with husband Nick Jonas in Miami.

In February 2019 at age 39, mom-of-two Morena Baccarin rocked this cute bikini on the beach in Rio De Janeiro, Brazil.

Model Gigi Hadid donned a bikini as she enjoyed a day of watersports while vacationing in Mykonos, Greece, in July 2019 at age 24.

Spice Girl Mel B donned a leopard-print bikini and coverup in Capri, Italy, while attending Heidi Klum and Tom Kaulitz's wedding afterparty at La Fontelina restaurant in August 2019 at age 44.

A 23-year-old Sophie Turner rocked a green bikini while hanging out by the pool in Miami on Aug. 3, 2019.

Elle Macpherson has had an incredible bikini body for decades. The mother-of-two — pictured here at 54 in a printed swimsuit while on a New Year's vacation in January 2018 — credits her healthy body to an alkaline and pH-neutral diet.

Alicia Vikander showed off her impressive abs while lounging on a yacht in Formentera, Spain, in the summer of 2017 when she was 28.

Brooke Burke, a mom of four, showed how hard she works for her bikini bod while exercising on the beach in Malibu in August 2018 — a month before her 47th birthday. "I truly believe that every day is a great day to work out. I know that exercise is the best medicine ever and the benefits you receive go far beyond just the physical," the mother of four told ModernMom.com in 2015.

Denise Richards looked taut and toned at 45 as she gripped a boogie board in Malibu in the summer of 2016. Denise has Pilates to thank for her rockin' bod. She told Shape magazine, "Pilates is the only exercise that doesn't aggravate my back. It was the only workout that made my belly flat again after having two kids."

A 46-year-old Selma Blair lounged by the pool in Miami in August 2018 in a teeny printed bikini.

Nicole Scherzinger rocked this teeny bikini with a body chain at age 40 while on the beach in Oahu, Hawaii, in October 2018.

Nicole Kidman was 48 when she wore this blue-and-white bikini while on an Australian beach in March 2016.

Cindy Crawford showed off her bikini body on a beach in St. Barts two days before her 50th birthday in February 2016, revealing that she still has a supermodel figure!

"The Real Housewives of New Jersey" star Teresa Giudice showed off her bikini body at 46 while on vacation in Mexico in August 2018.

Sports Illustrated Swimsuit Issue model Nina Agdal was 26 when she sported a leopard-print bikini in Miami in July 2018.

A 28-year-old Iskra Lawrence looked gorgeous in a two-piece swimsuit while modeling on a beach in Miami in April 2019.

She got it from her mama! Lisa Rinna's model daughter, Delilah Belle Hamlin, showed off her killer 20-year-old bikini bod while vacationing in Tulum, Mexico, in January 2019.

Mother-of-two Candice Swanepoel showed off her supermodel physique at 30 while walking the beach in Miami in December 2018.

Christie Brinkley's daughter, model Sailor Brinkley-Cook, wore a neon green bikini in Miami in December 2018 when she was 20 years old.

Kelly Rowland was 37 when she bared her bod in this neon-striped bikini, which she covered with denim cutoffs, while out in Sydney in March 2018.

There's no need to wonder why Bethenny Frankel's brand is called "Skinny Girl." The reality TV star and business mogul flaunted her beach bod back in November 2017 a few days after turning 47.

One hot mama! Hilary Duff showed off her bikini body in Malibu shortly before her 30th birthday in September 2017.

Victoria's Secret model (and mother-of-two) Alessandra Ambrosio was 37 when she hit the beach in Los Angeles in August 2018 in this black bikini.

A 25-year-old Frances Bean Cobain lounged by the pool while vacationing in Hawaii in February 2018.

Model Devon Windsor showed off her body in a crimson bikini in Miami in March 2019 just a few days before her 25th birthday.

Anna Faris showed off her fit bikini figure at 40 while filming "Overboard" in South Surrey, British Columbia, in June 2017.

Jennifer Connelly was 46 when she rocked a teeny black bikini in St. Barts in February 2017.

Model-actress Emily Ratajkowski showed off her enviable bikini bod at 27 in Miami in July 2018.

Jessica Biel was 34 when she wore this black two-piece swimsuit during a vacation in the Caribbean in November 2016.

Tennis champ Serena Williams rocked a mismatched bikini at 35 while relaxing in the Bahamas in late 2016.

A 21-year-old Hailey Baldwin looked cool in this salmon-hued bikini top and white pants while out in Miami in January 2018.

Model Doutzen Kroes hit the sand in Miami Beach with her two kids, Phyllon and Myllena, in this tiny black bikini in January 2017 a few weeks before her 32nd birthday.

Former reality TV star Brooke Hogan rocked a dark bikini while relaxing in Miami in January 2018 when she was 29.

A then-36-year-old Kim Kardashian West showed off her curves as she walked along the shore in Mexico in April 2017.

Jessica Alba lounged in a bikini while vacationing in Mexico in February 2017 a few months before her 36th birthday. She welcomed her third child later that year.

Jada Pinkett Smith walked on the beach in Hawaii in a tiny string bikini in January 2017. The then-45-year-old mother of two looked as fit and fierce as ever.

Singer-actress Rita Ora was 26 when she revealed her bikini body at the Hôtel du Cap-Eden-Roc in Cannes, France, in May 2017.

Amber Rose rocked an orange bikini with black-and-white piping while vacationing in Hawaii in January 2017. The devoted mom, who shares son Sebastian with ex-husband Wiz Khalifa and is expecting her second child in 2019, was 33 at the time.

"The O.C." alum Mischa Barton was 30 when she posed for the camera in a tiny white bikini in Santa Monica, California, in April 2016.

Chantel Jeffries showed off her slim 26-year-old frame in a chic leopard-print bikini while frolicking on the beach in Miami in March 2019.

Former "The Real Housewives of New York City" star Kelly Bensimon was 48 when she showed off her flawless bikini bod in Miami in December 2016. 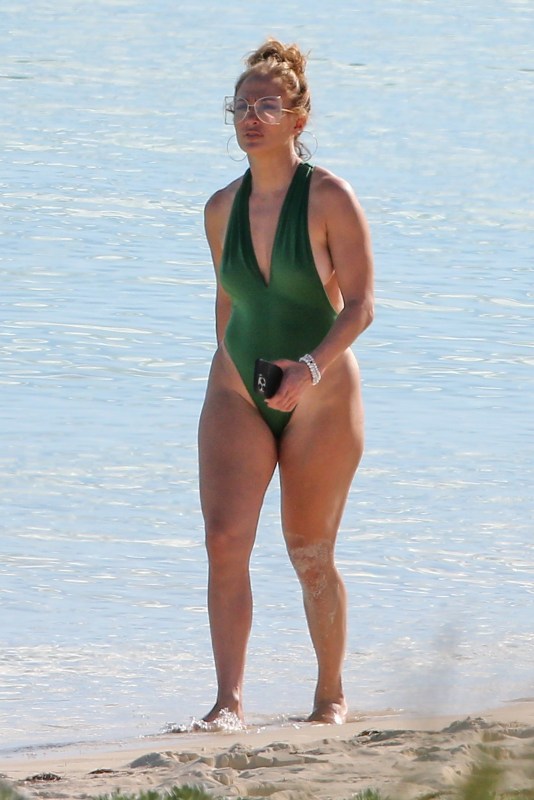