The 2019 CMT Music Awards are almost here! But before the biggest stars in country music gather for the show on June 5, we're introducing you to their significant others. First up is Maren Morris, who's up for three CMT Music Awards this year — video of the year and female video of the year for "Girl" as well as CMT performance of the year for her take on "(You Make Me Feel Like) A Natural Woman" with Brandi Carlile. We're sure Maren's hubby, fellow singer-songwriter Ryan Hurd, will be by her side on the red carpet. The two married in March 2018 after meeting way back in 2013 while working in a songwriting session for Tim McGraw's "Last Turn Home." Keep reading for more on the hottest country couples!

RELATED: What country stars looked like when they first started

Jason Aldean has been married to second wife Brittany Kerr since 2015. Brittany was famous for being a contestant on "American Idol" and working as a dancer for the Charlotte Bobcats before they got hitched. The duo share son Memphis, born in 2017, and daughter Navy, born in 2019. At this year's CMT Music Awards, Jason's up for male video of the year for "Drowns the Whiskey," which also earned him a collaborative video of the year nod, as did his song with Darius Rucker, "Straight To Hell."

Kelsea Ballerini married Morgan Evans in 2017. The two met in 2016 after co-hosting Australia's Country Music Channel Awards in Morgan's native nation, where he's a successful country singer. Kelsea's "Miss Me More" is up for video of the year and female video of the year.

Miranda Lambert is up for three CMT Music Awards in 2019 — two for "Drowns the Whiskey" with Jason Aldean (male video of the year and collaborative video of the year) and one for female video of the year for "Keeper of the Flame." She's also a newlywed! She got married to husband No. 2 — NYPD officer Brendan McLoughlin, whom she met in New York City less than three months prior — in January 2019.

Forget high school sweethearts — Dierks Bentley and Cassidy Black are junior high sweethearts! The two first met in middle school, and though they went their separate ways after high school, Dierks always knew Cassidy was the one. The two eventually reunited after Cassidy attended one of his concerts, and he popped the question back in 2005. They eloped the following day in Mexico and now share three children — daughters Evelyn (born in 2008) and Jordan (born in 2010) and son Knox (born in 2013). At the big show this year, Dierks is up for video of the year and collaborative video of the year for "Burning Man" with Brothers Osborne.

Luke Combs is getting married! The video of the year nominee for "She Got The Best of Me" is engaged to longtime girlfriend Nicole Hocking. He popped the question in November 2018 but the two haven't publicly shared their wedding date. The country crooner is also up for CMT performance of the year for "Beautiful Crazy" with Leon Bridges.

"Sunrise, Sunburn, Sunset" earned Luke Bryan a male video of the year nomination at this year's CMT Music Awards, and he's also up for collaborative video of the year alongside Darius Rucker, Jason Aldean and Charles Kelley for "Straight To Hell." When it comes to Luke's personal life, he's been happily married to Caroline Boyer since 2006. The couple met at a bar during college and despite breaking up for a bit after college, they eventually realized they were meant to be. The two share sons Thomas (born in 2008) and Tatum (born in 2010).

Male video of the year nominee for "Life Changes" Thomas Rhett has a perfect muse in wife Lauren Akins. The darling duo met back in the second grade and got married in 2012. Now they're the proud parents of daughters Willa Gray (adopted from Uganda in May 2017) and Ada James (born in August 2017). Aside from inspiring Thomas's hits and being a busy mother of two, Lauren also works as a home and family contributor for Country Living magazine and is involved with the organization Love One International, a charity that works with children in Uganda.

The Dan in Dan + Shay, Dan Smyers, is a married man. He wed longtime love Abby Law back in May 2017. His group is up for duo video of the year and video of the year for the smash hit "Speechless." As for Shay…

Shay Mooney of Dan + Shay is also off the market! The other half of the wildly successful country duo wed Hannah Billingsley, a former Miss Arkansas, in October 2017. The two welcomed their first child, son Asher James, earlier that same year.

Eric Church didn't have to look too hard to find his future wife — they met through work. The country crooner got to know Katherine Blasingame, a music publisher, when she was trying to set him up to write with one of her writers — and the rest is history! They wed in 2008 and welcomed sons Boone in 2011 and Tennessee in 2015. Eric's song "Desperate Man" earned him video of the year and male video of the year nominations.

One half of Florida Georgia Line, Brian Kelley , has been happily married to Brittney Marie Cole since 2013. He's up for two awards with his bandmate at this year's CMT Music Awards — video of the year and duo video of the year for "Simple."

As for the other half of Florida Georgia Line? Two-time nominee Tyler Hubbard is also a married man. He and Hayley Stommel wed back in 2015 and welcomed daughter Olivia Rose in 2017. In February 2019, they announced that they're expecting baby No. 2.

Video of the year nominee Maddie & Tae's Maddie Marlow is headed to the altar. The singer's high school sweetheart and boyfriend of seven years, Jonah Font, popped the question in 2018; the two have yet to announce a wedding date. Will Maddie's song "Friends Don't" take home the top prize at the CMT Music Awards? We'll soon find out!

The other half of Maddie & Tae, Tae Dye, is also off the market. The video of the year nominee is currently dating Josh Kerr, a fellow musician.

Darius Rucker has been married to Beth Leonard since 2000 — they met through work when he used to be a member of Hootie and the Blowfish. The couple share kids Daniella Rose, born in 2001, and Jack, born in 2005. His song "Straight to Hell" featuring Luke Bryan, Jason Aldean and Charles Kelley is up for collaborative video of the year.

Did you know that two members of group video of the year nominee Little Big Town are married to each other? Karen Fairchild and Jimi Westbrook have been wed since 2006. They share son Elijah and will share a CMT Music Award if their song "Summer Fever" wins.

Love was in the air for Little Big Town in 2006! That's also when Kimberly Schlapman wed Stephen Schlapman. The two welcomed daughters Daisy Pearl in 2007 and Dolly Grace in 2017. As for final member Phillip Sweet…

Rounding out the married folk of Little Big Town? Philip Sweet, who wed Rebecca Arthur back in 2007. They welcomed daughter Penelopi Jane that same year.

LoCash's "Feels Like a Party" is up for duo video of the year. One half of the group, Preston Brust, is a married man. He and wife Kristen tied the knot in 2015 and welcomed daughter Love Lily in 2016, followed by son Legend Wilde in 2018. His bandmate is also off the market…

LoCash's Chris Lucas is a happily married father. He and wife Kaitlyn are the proud parents of three children — son Caden and daughters Remi and Violet.

Brandi Carlile is married to Catherine Shepherd. The longtime loves tied the knot in 2012 and share two daughters: Evangeline Ruth (born in 2014) and Elijah (born in 2018). At this year's CMT Music Awards, Brandi's up for female video of the year for "The Joke" and CMT performance of the year for "(You Make Me Feel Like) A Natural Woman" with Maren Morris.

Keith Urban's other half? She happens to be a very famous lady — Oscar winner Nicole Kidman! The two wed in 2006 and welcomed daughters Sunday Rose in 2008 and Faith Margaret in 2010. His song with Julia Michaels, "Coming Home," is up for two awards — video of year and collaborative video of the year.

Midland's Mark Wystrach is currently dating the founder and CEO of Outdoor Voices, a clothing company. His band is up for group video of the year for "Burn Out." As for the rest of the Midland men…

The rest of the Midland men are spoken for as well. Cameron Duddy is married to photographer Harper Smith, with whom he shares son Kitt. As for the last member…

Sugarland's Jennifer Nettles is on her second marriage: She married model-turned-entrepreneur Justin Miller in 2011 and welcomed son Magnus in 2012. Her group is up for duo video of the year and collaborative video of the year for "Babe" with Taylor Swift.

Female video of the year nominee Carly Pearce is engaged! She's set to wed fellow country singer Michael Ray. Though the two had known each other for years, they reconnected on social media in 2018 and things went so well that Michael ended up popping the question that December.

Collaborative video of the year nominee Brantley Gilbert (who's up for his song "What Happens in a Small Town" with Lindsay Ell) has been married to Amber Cochran since 2015. The couple are parents to son Barrett, born in 2017, and are expecting a daughter later this year.

LANCO — who are up for group video of the year for "Born To Love You" — is filled with attached members. Lead singer Brandon Lancaster wed college sweetheart Tiffany Trotter — the inspiration behind the band's hit song "Greatest Love Story" — in 2017.

Newcomer Jordan Davis is up for breakthrough video of the year for "Take It From Me," and we have no doubt his lovely wife, Kristen O'Connor, will be right there cheering him on at the 2019 CMT Music Awards. The country singer wed the attorney in 2017. 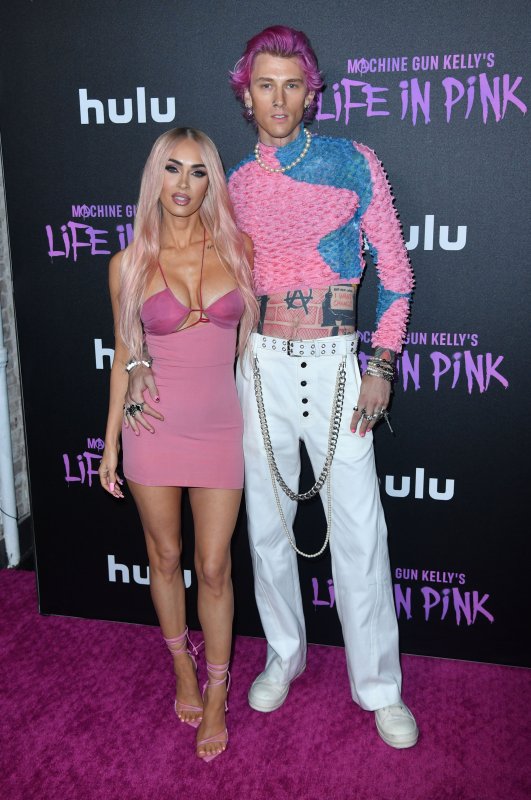 Up Next Matchy Matchy!