Vow renewals seem romantic, but are they really just a curse? According to some famous couples, they might be! Wonderwall.com is rounding up all the stars pairing who've split after having glamorous vow renewals. First up? Seal and Heidi Klum didn't just tie the knot once — they did it nearly every year they were married! They wed in Mexico in May 2005 and went on to renew their vows every year to mark their anniversary. They announced their split in January 2012… after six vow renewals. Keep reading to see more celebrity duos who've suffered the same post-renewal fate…

Jennifer Lopez and Marc Anthony wed in 2004 and opted to say those important vows once more in 2010. But just one year after they renewed their vows, the superstar couple announced they were divorcing.

A vow renewal certainly didn't work out for our next couple. Kris Jenner and Caitlyn Jenner married in 1991 and famously renewed their vows during a family vacation in Bora Bora in 2011. But in 2013, the couple ended up going their separate ways, with Caitlyn famously opening up about transitioning from male to female in 2015.

RELATED: Are the Kardashian-Jenners unlucky in love? A closer look

Despite being married for seven years, Demi Moore and Ashton Kutcher's vow renewal halfway through didn't stick. The couple, who famously had 15 years between them, divorced in 2013, three years after they reportedly renewed their vows in Israel.

Ashley Hebert and J.P. Rosenbaum from "The Bachelorette" originally married back in 2012 as cameras rolled for an ABC wedding special. In August 2018, they opted to renew their vows in Aruba as part of a promotional event for the Aruba Tourism Authority and documented the experience on Instagram. But the renewal didn't stick: A little more than two years later, the two split. In October 2020, they announced that after eight years of marriage, they were separating.

Josh Duhamel and Fergie hadn't even been married for a year with Josh surprised his wife with a vow renewal ceremony in Santa Barbara, California. The two exchanged vows once again on the night before their first wedding anniversary in a private ceremony by the ocean in 2010. Unfortunately, the two split eight years later, announcing in September 2017 that they were parting ways.

Ramona Singer and Mario Singer opted to renew their vows on camera for season 3 of "The Real Housewives of New York City" in honor of their 17th wedding anniversary in 2009. Unfortunately, their love didn't last. Just three years later, the two split — due largely to Mario's alleged infidelity. Their divorce was finalized in 2016.

Khloe Kardashian and Lamar Odom married in 2009. For their one-year anniversary, they opted to seal the deal a second time and have a vow renewal. Unfortunately, three years after that, Khloe filed for divorce.

One of the more infamous post-vow-renewal splits has to be between "The Real Housewives of Orange County" couple Shannon Beador and David Beador. After audiences watched David's infidelity unfold on season 10, season 11 brought a vow renewal planned by David himself in 2016. A year later and things were officially over, with Shannon filing for divorce in December 2017.

On "Jon & Kate Plus 8," Jon Gosselin and Kate Gosselin — who married in 1999 — famously renewed their vows on an episode of their hit TLC reality show that aired in November 2008. A year later, the parents of sextuplets and twins announced that they were divorcing.

In 2008, Mariah Carey and Nick Cannon tied the knot after dating for just two months. After that, they followed in Heidi Klum and Seal's footsteps with frequent vow renewals — every year of their marriage, to be exact. That came to an abrupt halt in 2014, when, after five previous renewals, they didn't say "I do" again — and rumors of a split swirled. They ultimately split later that year.

We watched Cynthia Bailey marry Peter Thomas not once but twice on "The Real Housewives of Atlanta." First in 2010 on season 3, then once again in a surprise vow renewal in Anguilla in 2012. But five years later in 2017, the couple officially called it quits.

Elizabeth Hurley married Indian textile heir Arun Nayar in 2007 after five years of dating. The couple wed not once but twice — first in an English castle and later in an elaborate Hindu ceremony in Arun's hometown in India. Unfortunately, the two weddings didn't help their union — the couple separated in 2010.

The OG of the OC herself, "The Real Housewives of Orange County" star Vicki Gunvalson, celebrated her 15th anniversary with Donn Gunvalson with a beach vow renewal in 2009. But less than a year later, they ended their marriage. Their divorce was finalized in 2014. 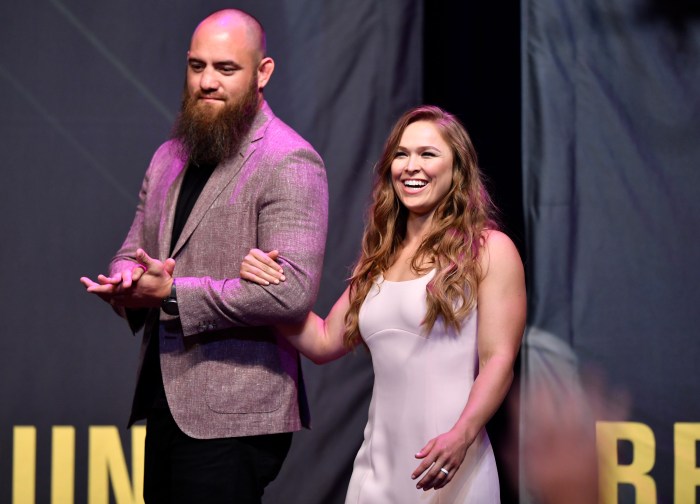