We love "Saturday Night Live" for its hilarious, timely skits, famous guest stars, hit musical performers and, most importantly, its amazing cast. But when the curtain closes, who are they loving? In celebration of the 45th anniversary of the late night sketch-comedy show's debut on Oct. 11, 1975, Wonderwall.com is taking a peek at the behind-the-scenes love lives of current "SNL" stars, crew members and some of our favorite alumni from years past. Let's start with this guy… In May 2019 after two years of dating, Colin Jost and Scarlett Johansson got engaged! Though they met in 2006 when he was fairly new to the writing staff and she was hosting, it would be another decade until sparks flew. The world first learned they were hooking up after they were spotted making out at the "Saturday Night Live" season 42 finale afterparty in the spring of 2017. Colin previously dated another Hollywood actress: He and "Parks and Recreation" star (and fellow Harvard alum) Rashida Jones split around 2016 after a few years of dating. Keep reading for more…

Chloe Fineman, the impressions queen who joined the cast of "Saturday Night Live" in 2019 for the show's 45th season, is off the market! The funnywoman, who's engaged to "The Kominsky Method" actor Casey Thomas Brown, held a fake wedding ceremony via Instagram in March 2020 amidst the coronavirus pandemic. She noted that their actual wedding plans had been halted due to the global health crisis before telling her followers, "Y'all invited to experience our love." In photos she later posted, Chloe and Casey are seen in hilarious costumes that included mullet wigs! While this wedding wasn't the real deal, we definitely can't wait until these two lovebirds actually tie the knot!

Heidi Gardner, who joined the cast of "Saturday Night Live" in 2017, is a married woman! In 2010, she said "I do" to Marvel Comics and "Robot Chicken" writer Zeb Wells. The couple is pictured here at the NBA All-Star Game in 2019.

Aidy Bryant joined the "Saturday Night Live" cast in 2012 and made a name for herself portraying characters like Sarah Huckabee Sanders and Adele. In April 2018, she married writer and "Palm Springs" actor Conner O'Malley — who's perhaps best known for his writing work on "Late Night With Seth Meyers" — after more than a decade together.

Kate McKinnon joined the cast of "Saturday Night Live" in 2011 and became the first openly gay female performer on the show. At the 2017 Emmys, Kate was photographed with girlfriend Jackie Abbott. According to Jackie's website, she's not just an actress but a photographer and clown. Seeing as Kate is one of the most versatile impersonators on "SNL," her girlfriend's many talents come as no surprise.

Pete Davidson started dating Ariana Grande in May 2018. By June, they were engaged and had moved into a lavish New York City apartment together. Ariana even wrote a song — the aptly titled "pete davidson" off her 2018 "sweetener" album — dedicated to her then-fiancé. However, by October 2019, it was over. The following year, Pete dated three more gorgeous Hollywood stars. From January to April 2019, he was linked to Kate Beckinsale. That summer, he dated "Once Upon a Time in Hollywood" actress Margaret Qualley. And that winter, he had a brief but intense romance with another "it" girl…

Comedian Pete Davidson started seeing model Kaia Gerber — the daughter of supermodel Cindy Crawford and Casamigos tequila co-founder Rande Gerber — in the fall of 2019. After a brief but intense romance, however, the pair called it quits that winter. "We were dating for a few months," Pete said in an interview with Charlamagne Tha God. "It just wasn't the right place or the right time at all," he added, noting that he wasn't in the best place mentally and that Kaia "should be having fun" at her age.

Before Ariana, Margaret and Kaia, there was Cazzie. Pete Davidson, who joined the cast of "SNL" in 2014, dated Cazzie David — the daughter of "Seinfeld" creator and "Curb Your Enthusiasm" star Larry David — from 2015 to early 2018. In a 2016 interview with People, Pete shared that he loved Cazzie "very, very much" and the proof could be seen in their sweet Instagram pics, including one touching image Cazzie shared on Sept. 11, 2016 — the 15-year anniversary of Pete's dad's death. The firefighter was killed in the horrific terror attacks of 9/11. They split in the spring of 2018.

In October 2017, it was reported that Emma Stone was dating someone new following her 2015 split from Andrew Garfield: "Saturday Night Live" segment director Dave McCary. It's unclear how the two met, but Emma did host "SNL" in December 2016 and also made an appearance on the show when pal Ryan Gosling hosted in September 2017. In the fall of 2020, it was confirmed that Emma and Dave had quietly and privately wed amid the coronavirus pandemic after initially postponing their spring 2020 ceremony as the global health crisis took hold. Around the same time, speculation mounted that Emma and Dave were also expecting their first child.

Grab your popcorn because this is the most intense love story that never was. In January 2017, Married to the Mob streetwear clothing line founder Leah McSweeney threw major shade at "Weekend Update" co-anchor Michael Che for reportedly being "arrogant" and "rude" during their text chats that began when the two met on the Raya dating app. While some were quick to put Michael on blast, he quietly shared screen shots of what appeared to be their actual text exchanges, which cast a whole lot of doubt on the "The Real Housewives of New York City" star's claims. Instead of Michael looking like a jerk, Leah came off looking aggressive, saying (after weeks of silence and very little communication between the two before that), "U hate me cus I'm white. Our conversations r everything to me btw. We have a lot of friends in common and if any of them saw this I would b so ashamed." When she later sent him a picture and asked if he wanted to meet up, he replied, "I don't wanna meet up. You text really strange declarations looking for a reaction, and I don't wanna know what's the real life equivalent of that."

Beck Bennett joined the cast of "Saturday Night Live" in 2013. He started dating actress Jessy Hodges in 2011. On Aug. 25, 2018, Beck and Jessy celebrated a major milestone — their wedding day!

Alex Moffat — who joined the cast of "Saturday Night Live" in 2016 — is notoriously private, so it wasn't easy to find much about his love, comedian Caroline Rau, whom he married in 2017.

Funnyman Kenan Thompson (who's been a cast member on "Saturday Night Live" since 2003) married his love, model Christina Evangeline, in 2011. The couple exchanged vows in the Arctic Room at the Georgia Aquarium in Atlanta. In 2014, they welcomed their first child, daughter Georgia. Their second daughter, Gianna, was born in 2018.

Although Lindsay Shookus isn't technically a cast member on "Saturday Night Live," she is an Emmy-winning producer on the show, where she's worked since 2008, and her romance with Ben Affleck was too hot to leave off our list. The couple went public in July 2017, though multiple outlets have alleged they first became romantically involved in 2014 when they were both still married to their respective exes, Jennifer Garner and former "SNL" producer Kevin Miller, who moved on to "Late Night With Seth Meyers." They ended their on-again off-again romance for good in April 2019.

One former cast member who found love in the co-worker pond was actor and "Saturday Night Live" writer Michael Patrick O'Brien, who dated (and possibly still dates) current "SNL" star Cecily Strong (who joined the show in 2012). In 2014, Cecily went on record with Cosmopolitan to confirm that Mike (seen here with her at an NBA game in 2014) was indeed her boyfriend, though she said dating someone she works with was "probably stupid." However, she added, "The good thing is I never feel like I'm complaining or talking about my job too much." Mike left the show in late 2015.

Taran Killam, who arrived at "Saturday Night Live" in 2010 and departed in 2016, was dating Canadian actress Cobie Smulders (who gave birth to their first child in 2009) for years before they finally tied the knot in 2012. In 2015, they welcomed their second child. In 2017, both Taran and Cobie made their Broadway debuts — he as King George in "Hamilton" and she as Joanna in a production of "Present Laughter."

Before Seth Meyers hosted his own late night talk show, he was a cast member, head writer and "Weekend Update" anchor on "Saturday Night Live" from 2001 to 2014. A year before he left the show, he married lawyer Alexi Ashe. In 2016, the couple welcomed their first child, son Ashe. Baby No. 2 — son Axel — was born in the lobby of their apartment building in 2018.

It doesn't seem real that "Saturday Night Live" star and former head writer Tina Fey left the show in 2006 to focus on her own projects, like her award-winning comedy series "30 Rock." Tina's absence on "SNL" wasn't felt for long, however, because she's made a point to return on and off over the years to host and take part in sketches. In 2001, Tina married composer and producer Jeff Richmond, who's worked with her on both "30 Rock" and her Netflix love child, "Unbreakable Kimmy Schmidt." The couple share two daughters.

Another "Saturday Night Live" alum is film and TV star Jason Sudeikis, who joined the show in 2003 as a writer before becoming a cast member in 2004. Jason left the hit series in 2013, but like Tina Fey, he's been known to stop by the set and make appearances (much to our delight). In 2011, Jason started dating actress Olivia Wilde after meeting her at an "SNL" finale party (which seems to be the place for the cast to find new love). The couple announced their engagement in 2013 and in 2014, they welcomed their first child, Otis, followed by his little sister, Daisy, in 2016.

You guys, it's been more than 25 years since Will Ferrell joined the cast of "Saturday Night Live." (How is that even possible?!) The notoriously funny actor starred on the show from 1995 to 2002 and went on to become one of the biggest stars in Hollywood. In 2000, Will married Swedish actress and auctioneer Viveca Paulin. In 2004, they welcomed their first child, son Magnus, followed by Mattias in 2006 and Axel in 2010. They're not only a totally adorable couple, but they give us all baby name goals.

Comedian Luke Null joined the cast of "Saturday Night Live" for one season in 2017 and 2018, bringing with him a knack for laughs, some musical chops and girlfriend Cady Shultz. The pair announced their engagement in 2019 and in 2020, Cady revealed in a super-sweet Instagram post that they'd been together for nine years and planned to be husband and wife by their 10th anniversary. 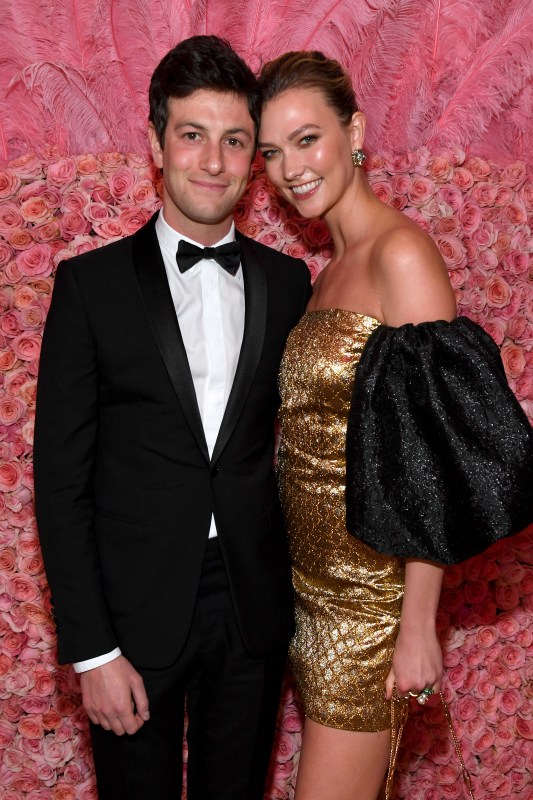