Talk about a shock split! On Feb. 28, 2017, reps for Katy Perry and Orlando Bloom announced that the stars, "are taking respectful, loving space at this time." The news came as a surprise to many fans of the couple, who started dating in January 2016, as they were seen together as recently as Oscar Sunday — and just one day before confirming the split, Orlando posted a video of himself playing with Katy's dog, Butters. In the wake of the breakup news, reports have surfaced claiming Orlando was seen "getting cozy" with a mystery brunette at a pre-Oscar party (she was later ID'd as the daughter of Global Green President Les McCabe) and that Katy and Orlando weren't as committed as fans thought. "It was never really supposed to be serious between them," a Katy source told People. "When it first started, she was basically like, 'This will be fun for now.'" One of Orlando's friends told the mag that the actor "was not in the mindset to settle down." Keep reading for more relationship updates!

It sure looks like it's on! Diane Kruger and Norman Reedus were photographed together in New York City on Feb. 24, 2017, fueling fresh speculation that they're a couple. This sighting of them together — they were snapped unloading packages from the trunk of a sports car after reportedly returning from a road trip — comes nearly eight months after she confirmed her split from Joshua Jackson, whom she'd dated for a decade. Diane and Norman, who stars on "The Walking Dead" and co-starred with her in 2015's "Sky," were accused of hooking up at a New York City bar back in December 2015. A few days after the most recent sighting, a source claimed to E! News — which also cited an eyewitness who saw Diane and Norman kiss on the lips — that the actors are "just friends."

Huge congrats are in order for "Gossip Girl" alum Penn Badgley and his new wife, musician Domino Kirke! The lovebirds, who have been dating since 2014, got married in a low-key ceremony on Feb. 27, 2017, at a courthouse in Brooklyn. Domino is the younger sister of actress Jemina Kirke of "Girls" fame and the older sister of actress Lola Kirke. Penn previously dated Blake Lively and Zoe Kravitz.

Could Meghan Markle be heading for a royal wedding? Us Weekly seems to think so! It's been rumored that Prince Harry will pop the question and ask Meghan Markle to be his bride as they near their one year anniversary this summer. The couple talk about their future a lot, and with Meghan's run on "Suits" coming to an end things could be getting serious pretty quickly.

Looks like "Lion" star Dev Patel is off the market! The Oscar-nominated actor is dating Australian actress Tilda Cobham-Hervey, multiple outlets report. The pair were seen holding hands at Oscar pre-parties and during a walk in Hollywood on Feb. 28, 2017. The two young actors met while filming their newest movie, "Hotel Mumbai," in 2016. Dev's last serious relationship was with fellow Indian actress Frida Pinto, whom he dated on and off for six years.

A fast and furious surprise?! Action star Tyrese Gibson shocked fans when he announced in a sweet Instagramvideo on Feb. 28, 2017, that he'd gotten married — on Valentine's Day — to his girlfriend, Samantha Lee. While we know next to nothing about his new lady — and he's since gone through and scrubbed his social media profiles of any news regarding the nuptials — we do know that she's a model and that she wore pink to their wedding! Tyrese was previously married to Norma Gibson, with whom he shares daughter Shayla.

Impending engagements seem to be in the air! Sandra Bullock and her boyfriend of nearly two years, photographer Bryan Randall, have reportedly been talking about engagements and weddings as well. According to Us Weekly, the couple — who co-parent Sandra's two children Louis and Laila — want to make their commitment to each other official. "It's not going to be documented. And they're not going to tell anyone it's not legal," a source told Us Weekly. "Bryan doesn't even care; he is happy to do whatever Sandra wants." We're happy Sandra is finding her happily ever after!

Former New York Yankees baseball player Alex Rodriguez and 23andMe founder and Silicon Valley tycoon Anne Wojcicki are over. On Feb. 25, 2017, Page Six reported that the couple quietly split a few months ago after nearly a year of dating. "They were an unusual couple, from very different backgrounds, but they are both smart business people, and had quite a few things in common, including a fascination with the tech world," a source told Page Six. "But, perhaps in the end, they were a little too different."

New couple alert?! "Ray Donovan" actor Liev Schreiber got tongues wagging at the Vanity Fair Oscar Party on Feb. 26, 2017, when he was seen getting cozy with Kate Driver, the sister of actress Minnie Driver. While it's unclear if they're dating — though speculation abounds — Kate, a producer and manager, is the first woman Liev has been seen out with since announcing his split from Naomi Watts in the fall of 2016. Kate is also reportedly a longtime friend of Naomi's.

There's been buzz about these two for months now, but on Feb. 24, 2017, "Outlander" heartthrob Sam Heughan finally went public with rumored girlfriend Mackenzie Mauzy. The Scottish actor and the American actress, who played Rapunzel in the movie musical "Into the Woods," posed for photos together at the Weinstein Company and Piaget's Oscar Weekend Kick-Off Party and earlier in the day were snapped together wearing matching "Equality" T-shirts in support of the United Talent Agency's refugee rally.

Don't expect John Mellencamp to stay friendly with his exes! In a conversation with Howard Stern, the singer said that most of the women he has dated feel resentment towards him later. "Oh, women hate me," he said. "I loved Meg Ryan. She hates me to death." Why you might ask? "I think it's because I'm a child. I throw fits, I gripe, I complain. I'm moody. Every bad thing that a fella can be, that's me." Well, at least he knows what's up!

On Feb. 22, 2017, The Daily Mail reported that "The Fall" star Gillian Anderson is dating "The Crown" writer Peter Morgan. The newspaper noted that Gillian made her first public appearance with Peter, who separated from his Austrian wife Lila Schwarzenberg in 2014, at the British Film Institute chairman's dinner in London on Feb. 21.

Following his best actor Oscar win on Feb. 26, Casey Affleck and his girlfriend, "Supergirl" actress Floriana Lima, made their red carpet debut as a couple at the Vanity Fair Oscar Party. They've been linked since October 2016. He split from wife Summer Phoenix (of the legendary Phoenix acting family) in 2015.

Less than three months after filing to divorce husband Mike Shay, "Vanderpump Rules" star Scheana Marie Shay made her public debut with her new boyfriend, actor Robert Valletta (his sister is model-actress Amber Valletta). On Feb. 22, 2017, the new couple attended OK! Magazine's pre-Oscars party in Hollywood together. "Scheana wasn't looking for anything; she just got out of a marriage. But things happened and this feels right," an insider told E! News. "They're seeing where it goes, but are really enjoying each other's company."

Though Jamie Foxx and Katie Holmes have yet to confirm they're dating, on Feb. 23, 2017, the National Enquirer claimed that the alleged undercover lovers split a month after he spent $35,000 on a trip to Mexico to celebrate her birthday in December. Sources tell the tabloid that Scientology is to blame. "Jamie is upset with Katie's constant paranoia about Scientology," a source close to the actor told the Enquirer. (Her ex-husband Tom Cruise is, of course, the controversial religion's most famous member, and Katie's issues with the church reportedly contributed to their 2012 divorce.) "He feels like if he can't protect Katie, then she'll never feel safe. So at some point he had to give up."

Pamela Anderson seems to have slightly confirmed the speculation that she's dating WikiLeaks founder Julian Assange. "I've spent more time talking to Julian than all of my ex-husbands combined!" the former Playboy model joked to Australian radio hosts Kyle and Jackie O on Feb. 23, 2017. Pam has visited Julian multiple times in London, where he lives in Ecuador's embassy. He's been stuck there since he applied for political asylum in 2012. "It was never the intention to become romantic," Pam teased, "it was just to join forces to do something important." A week earlier, Julian fueled the speculation when he phoned into the same show! "She's an attractive person with an attractive personality. She's no idiot at all! Psychologically, she's very savvy," he said. 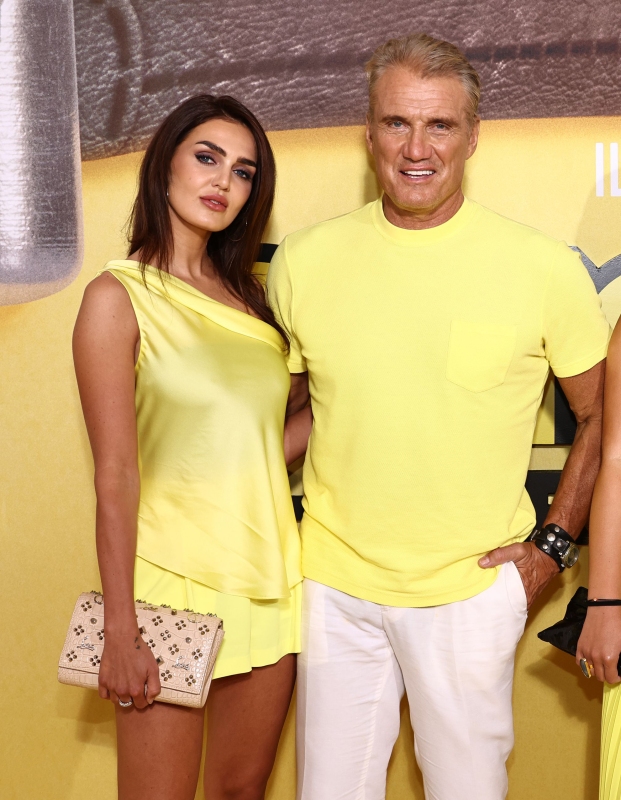