Another week, another batch of celebrity romance updates! Huge congrats are in order for country crooner Sam Hunt and his lady love, Hannah Lee Fowler. The duo tied the knot on April 15 in Cedartown, Georgia, in front of an intimate group of friends and family. The music star and the nurse had been dating on and off for 10 years and had a very short engagement. Keep reading for more celeb love life updates this week…

Rumors are swirling that "Beauty and the Beast" actor Luke Evans has rekindled his romance with Spanish-born model Jon Kortajarena, to whom he was linked in 2014. The actor is currently in Budapest shooting his latest project and took to Instagram to share some photos of family and friends who came out to celebrate his 38th birthday on April 15. Luke posted the following cryptic message with one snapshot: "What an amazing bunch of people. Thank you for an amazing birthday. Just missing one special someone…you know who you are." That raised suspicions because Jon, according to the eagle-eyed folks at Just Jared, had posted and then deleted some photos on Instagram Stories from his recent trip to — you guessed it — Budapest.

Kid Rock is getting married again! On April 11, the Detroit Free Press reported that the musician and longtime girlfriend Audrey Berry quietly got engaged in early 2017. Fans spotted her wearing an enormous diamond ring while on Kid Rock's eighth annual "Chillin' the Most" cruise during the first week of April. He reportedly started dating Audrey not long after divorcing Pamela Anderson in 2007.

It's over. Despite attempting a reconciliation in recent months, NBA legend Scottie Pippen and former "The Real Housewives of Miami" star Larsa Pippen are moving forward with plans to divorce after 19 years of marriage, TMZ Sports reported on April 18. Scottie originally filed for divorce in October 2016 but in February, he and Larsa were spotted on a date together and a source confirmed to Us Weekly that they were "working on their marriage." But in the end, TMZ reported, "the two sides decided it's just not working and the best move is to split." TMZ also reported that Scottie and Larsa are determined to remain friendly as they co-parent their four kids.

Jennifer Garner and Ben Affleck have officially pulled the plug on their marriage. On April 13 — a month after Ben revealed he'd completed rehab for alcohol issues — Jen formally filed divorce documents, nearly two years after they first announced plans to divorce. Her petition and Ben's response were filed together and although there was no prenup, a money battle isn't expected. In their paperwork, both stars asked for joint legal and physical custody of their three kids and neither asked for spousal support. Four days later, TMZ reported that Ben is now dating someone though "not seriously." He's also planning to move out of the family home's guest house and into his own place. "He's ready to move on," a source told TMZ. It's also been claimed that they finally filed after exhausting all attempts at reconciling. "It came down to his last-ditch attempt at saving things by going to rehab," a source close to the situation told People magazine. "But it was just too little too late." A Jen source further told the magazine, "Jen waited for the right time. She wasn't going to file for divorce while Ben was struggling. She is very proud of him for getting help."

Something's up between Orlando Bloom and Nina Dobrev, according to People magazine. "They've known each other for a while. Recently, they've been hanging out as more than friends. It's super casual," a source said in an April 15 report. How casual? People also reports that Orlando — who split from Katy Perry in February — was "all over" model Ashley Haas at a Coachella bash on April 15 while Nina was partying just 15 feet away. A rep for Nina, who was most recently linked to actor Glen Powell, told People that the actress and Orlando "are just friends. They have the same representation and friends in common and often end up in the same social group. That's all it is."

It sounds like Elle King is single again. The "Ex's and Oh's" singer, who announced her engagement to Andrew "Fergie" Ferguson in February 2016, was set to marry him in New York on April 15, E! News reported. Instead, she was in Seattle watching Eagles of Death Metal perform. "Skipped out on my wedding," she wrote on Instagram alongside a video clip from the concert. "I married Rock&Roll instead…" Though Elle hasn't explicitly confirmed her split, she did drop some big hints in several Instagram posts in the days before her runaway bride comment. "I'm going to choose happiness and curiosity and try practicing more patience with this new chapter. It's scary," she noted in one that also mentioned "moving boxes."

If this report is true, this is one odd couple: According to a story in Australian magazine New Idea (via the Daily Mail Australia on April 17), pop star Kylie Minogue has been quietly dating Britain's Prince Andrew for several weeks. "At the moment they're inseparable," a palace source told the magazine. "Andrew is 100 percent smitten." He reportedly reached out to Kylie after hearing her engagement to actor Joshua Sasse had ended in February. However, a source close to Prince Andrew told The Daily Beast that rumors of a romance are "a load of rubbish."

Caitlyn Jenner is dishing about ex-wife Kris Jenner in her new book, "The Secrets of My Life," and Kris is livid about it. In an excerpt published in People magazine (via DailyMail.com) in its new issue out April 19, Caitlyn — who famously came out as transgender two years ago — opens up about her sex life with Kris and admits she wasn't entirely comfortable being intimate with the Kardashian family matriarch during their decades-long union. Sex, she explains, was "imbued" with love. But, she added, "My attitude is no different than it was in high school: I'm just not entirely comfortable with it." She also answered a question she felt many fans would like to ask: How was it early on in their marriage, which produced daughters Kendall Jenner and Kylie Jenner? "Since — let's not kid ourselves — everyone wants to know, Kris and I have good and frequent sex at the beginning," Caitlyn wrote. The book comes out on April 25. Kris, for her part, isn't thrilled. "I read it and basically the only nice thing she had to say was that I was great socially at a party one time," Kris tells daughters Kim Kardashian West and Khloe Kardashian on "Keeping Up With the Kardashians." "None of it makes sense. Everything she says is all made up."

"New Girl" actress Hannah Simone is married — and pregnant! According to an April 13 report from Us Weekly, the former model secretly married Jesse Giddings — a musician, photographer and onetime E! correspondent and MuchMusic VJ — in July 2016, according to multiple sources. The couple, who sources told Us are now expecting their first child, have appeared together in social media photos but have never confirmed their relationship.

On April 17, TMZ broke the news that New York Knicks star Carmelo Anthony and his wife, actress La La Anthony, had separated. One day later came another bombshell report, this one alleging that he has a mistress who works at a NYC gentleman's club — and that the woman is more than six months pregnant. Now comes a report from Page Six claiming that the NBA player, who's been haunted by cheating rumors for years, had a way to condone his alleged infidelities. "Melo's tagline was, '[La La's] married, I'm not.' That's how he would justify it," a source told Page Six. "His attitude is that all professional athletes do it, and many of them do. La La has put up with a lot. She knew it was going on, but I guess this time she's had enough." Multiple sources also told the New York Post's gossip column that Carmelo often flirted or hooked up with women when he was on the road despite being married to La La, with whom he shares a 10-year-old son. Though the athlete's rep declined to comment to the Post on the cheating allegations and expectant mistress report, a source close to Carmelo did say this: "The stripper pregnancy rumor is not true. Yes, he's not been perfect, but the baby with a stripper isn't true."

Are wedding bells ahead for Amber Heard and her maybe-probably boyfriend, Elon Musk? They have yet to go public as a couple despite buzz that they might soon confirm their relationship. But that detail doesn't seem to be slowing down the constant churn of the old rumor mill. Amber's dad reportedly told tabloid Grazia that Amber (who split from first husband Johnny Depp 11 months ago) and her purported billionaire beau (who's been married three times before — including twice to the same woman) are in pre-engagement mode. "Amber and Elon are both very serious about each other. She would love to get married," Amber's father told the magazine. "One of the things they want to do is settle down and have a family. They are making plans for that."

The truth shall set you free! For years, reports of Katie Holmes and Jamie Foxx's undercover relationship have circulated in the media. Jamie has long denied the rumors while Katie always seems to avoid the question. Now, though, it seems they might be ready to go public with their love. A source told Us Weekly in a report published on April 13 that the actress is "tired of playing the hiding game" and intends to "go public." A second source revealed the lengths the actors went to in order to keep from being found out: "To make it impossible to get photo evidence that they are together, they traveled in cars with tinted windows and took secret back elevators." Time will tell if those days are coming to an end.

Congratulations are in order for Nicky Whelan and Kerry Rhodes. The Australian actress, best known for her work on soap opera "Neighbours," and the NFL player-turned-actor were married in a lavish ceremony at the Beverly Hills Hotel on April 15, reports People, which has exclusive photos from the wedding and reception. The bride wore a curve-hugging white lace gown by J'Aton Couture for the nuptials — which were officiated by "Star Trek: The Next Generation" actress Marina Sirtis — while the groom donned a blue tuxedo by Tom James. Celebrity friends on hand to help them celebrate included Brenda Song and AnnaLynne McCord. The couple and their guests also enjoyed a white three-tiered wedding cake from Carlo's Bakery, which is owned by their friend, "Cake Boss" star Buddy Valastro. 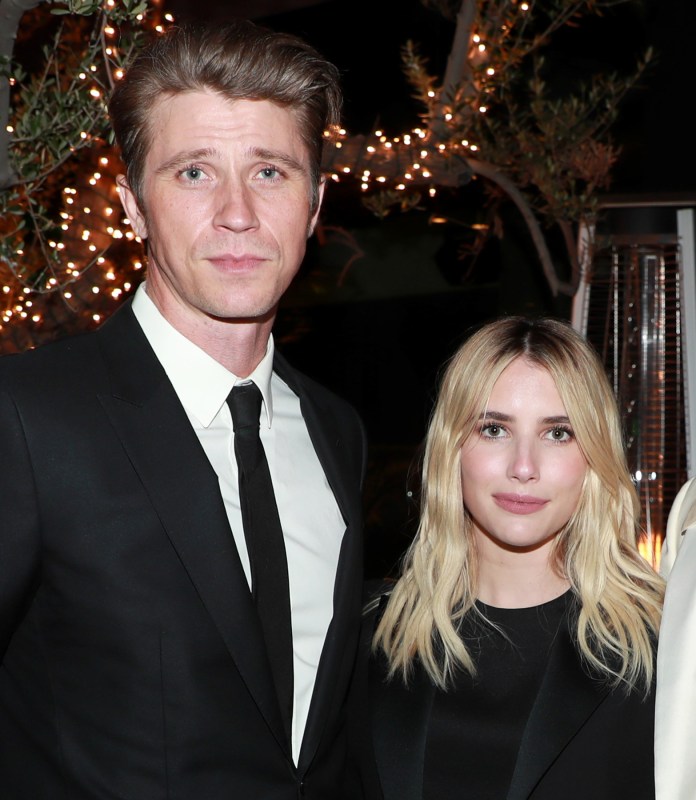