John Tesh was secretly battling cancer (again) last year, he revealed in early October as he shared the story of his cancer's return. In a chat with People magazine, the former "Entertainment Tonight" anchor and pianist-composer explained, "I woke up with an enormous amount of pain one morning in October 2020 — I had pain in both my legs. It turned out there were two tumors around either side of my pelvis and wrapped around my organs." John, 69, said he was prepared to fight, as this wasn't new territory for him: He'd previously been diagnosed with a rare form of prostate cancer back in 2015, and doctors gave him 18 months to live at the time. "I went back into the trenches — I was battle ready" he said. John quietly underwent multiple surgeries and chemotherapy treatments. The new tumors left him with just one functioning kidney and he had to have his prostate removed, but he's now cancer-free.

Geena Davis has settled her divorce from a man she never actually married. Say what? Back in 2017, Geena and pediatric plastic surgeon Dr. Reza Jarrahy split after 17 years of marriage. After the breakup, Reza asked for their property to be split equally. Geena, though, quickly told her ex to lawyer up and claimed that they were never actually legally wed. While terms of the deal remain confidential, a source sympathetic to Reza said the actress got the lion's share of the property. "They were very unfavorable to Reza, who agreed to settle just to put this behind him and be free of the nightmare Geena has caused for him," a source told Page Six. The road to a settlement supposedly cost $1.5 million in legal fees. "Reza has had enough of her narcissism, so he was willing to take a bad deal just to make her go away and refocus on the kids," the source said, referencing the couple's daughter, 19, and twin boys, 17. "This has been devastating for Reza. Geena's priorities since day one have been to preserve her lifestyle and wealth above anything else."

At last! Six years after releasing her last song, Adele — who covers the November issues of British and American Vogue (pictured) — has confirmed that new music is coming… and fast! On Oct. 5, the singer posted a video to Instagram that confirmed a new track, "Easy On Me," will be out on Oct. 15. The new song coincides with persistent rumors that a Vegas residency show awaits the British music star. Billboard reported that Adele is in talks with possibly three different Vegas venues for a residency show. The report pointed out that she has no holds on arenas in North America for next year despite album release plans. One day later on Oct. 6, popular Sin City blog Vital Vegas reported that Adele is set to begin a residency in 2022 at the Colosseum at Caesars Palace. Garth Brooks is set to begin a residency there too, according to the blog.

Weight of the world

Adele further made headlines with what she had to say in new cover stories in American Vogue (pictured) and British Vogue's November issues, which were released on Oct. 7. She spoke about her much-chronicled 100-pound weight loss over the last few years and fans' reactions. "My body's been objectified my entire career," she told the magazine. "It's not just now. I understand why it's a shock." Adele explained that she understands why some women felt hurt by her slimdown, admitting, "Visually, I represented a lot of women." But she's adamant that she's the same person. "And the worst part of the whole thing was that the most brutal conversations were being had by other women about my body," she said. "I was very f****** disappointed with that. That hurt my feelings." While dealing with the backlash and anxiety, the gym became Adele's happy place. "It became my time. I realized that when I was working out, I didn't have any anxiety. It was never about losing weight. I thought if I can make my body physically strong, and I can feel that and see that, then maybe one day I can make my emotions and my mind physically strong," she said.

Britney Spears clearly feels that the #FreeBritney movement was influential in getting her father removed from her conservatorship. On Oct. 4, less than a week after her dad, Jamie Spears, was suspended from the conservatorship, the pop star thanked her diehard fans. "#FreeBritney movement … I have no words … because of you guys and your constant resilience in freeing me from my conservatorship … my life is now in that direction!!!!! I cried last night for two hours cause my fans are the best and I know it … I feel your hearts and you feel mine … that much I know is true !!!!!" In another message the following day, she gushed about her attorney. "Thankfully I found an amazing attorney Mathew Rosengart who has helped change my life," she wrote. As Britney was exploding with happiness, more reports came out about Britney's life under the conservatorship: TMZ reported that Jamie and his team tried "curing" Britney with religion, and for a time would only let her read religious material. Also, amid a report that Jamie secretly recorded her, Britney's house was swept for listening devices, a source told The Sun.

Charlie Sheen is off the hook when it comes to child support payments to ex-wife Denise Richards. Court records show that the "Major League" star's request to stop paying his ex-wife for their two children — Sami, 17, and Lola, 16 — was granted. In September following Sam's claim that Denise's home was "abusive" — which the actress has denied — Charlie confirmed that their eldest daughter had moved in with him. A source told People magazine that Lola still lives with Denise but stays with Charlie when Denise is out of town. "I think what transpired today is extremely fair," Charlie told Us Weekly after the court decision on Oct. 4. "It speaks to not just today, but it speaks historically to that same fairness." Denise is apparently livid, as she was supposedly unaware that a court date was even on the books — a claim Charlie's team insists is false. "Charlie filed [to stop paying child support] two years ago and kept pushing the court date, so Denise was very surprised that it happened yesterday while she [was] out of town filming," a source told People magazine. "She was blindsided."

Meghan Trainor and husband Daryl Sabara have been doing some serious bathroom bonding, it turns out. The singer and the "Spy Kids" star moved into a brand new California home recently and had his-and-hers toilets installed next to each other. The home builder was initially confused and even thought the couple was joking when they asked for dueling porcelain thrones, but the contractor ended up putting two toilets in one bathroom, as requested. The couple apparently goes number 1 together often. As pop culture fans shook their collective heads, Meghan tweeted, "To clear things up… we [have gone number 2] ONCE together and we laughed and said never again." Daryl, she added, has no problem, well, hanging out while she, uh, sits in. 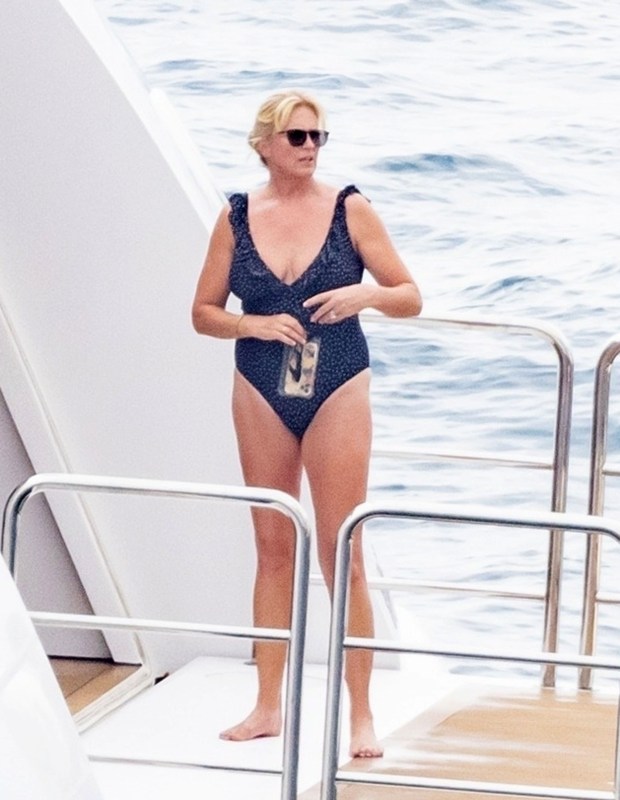