Katie Holmes has a new man: New York City chef Emilio Vitolo. Early in September, the actress was seen on a dinner date with Emilio in the Big Apple. A few days later, they were seen smooching, essentially confirming the romance, and more kissing and PDA followed all month long. The relationship isn't without controversy, however. On Sept. 9,  the Daily Mail reported that Emilio was in a two-year relationship with another woman to whom he was engaged when he started seeing Katie. Emilio allegedly dumped his fiancée over text message after hearing that his exploits with Katie were about to hit the Internet.

The end is near. On Sept. 8, the Kardashian-Jenner family announced that the next season of "Keeping Up With the Kardashians" will be the last, ending an impressive 14-year run in 2021. "To our amazing fans — it is with heavy hearts that we've made the difficult decision as a family to say goodbye to 'Keeping Up with the Kardashians,'" a statement from the family read. "After what will be 14 years, 20 seasons, hundreds of episodes and numerous spinoff shows, we are beyond grateful to all of you who've watched us for all of these years — through the good times, the bad times, the happiness, the tears and the many relationships and children. We'll forever cherish the wonderful memories and countless people we've met along the way." Khloe Kardashian was in tears over the decision, momager Kris Jenner revealed, and Scott Disick also wanted it to go on. Page Six reported the two wanted to keep it going for an easy payday.

After a very trying summer, Ellen DeGeneres returned to her talk show to launch her 18th season on Sept. 21. She immediately addressed allegations of a toxic production environment. "I learned that things happened here that never should have happened. I take that very seriously and I want to say I am so sorry to the people that were affected. I know that I am in a position of privilege and power and with that comes responsibility and I take responsibility for what happens at my show," she said. Over the summer, people also claimed that Ellen wasn't as nice as she seemed on TV, particularly given her "be kind" motto. "Being known as the 'be kind' lady is a tricky position to be in," she said. "So let me give you some advice out there if anybody's thinking of changing their title or giving yourself a nickname — do not go with the 'be kind' lady. Don't do it. The truth is I am that person that you see on TV."

John Boyega wasn't exactly in his happy place while working on "Star Wars: The Force Awakens." Back in 2015, John catapulted to fame after playing Finn, the first-ever Black Stormtrooper in the storied franchise's history. He starred in two sequels too. In a chat with British GQ published on Sept. 2, the actor ripped Disney (which owns the "Star Wars" franchise) for diminishing his role over time. John felt he was marketed and championed for his groundbreaking character but was ultimately "pushed to the side." Of Disney, he added, "What they want you to say is, 'I enjoyed being a part of it. It was a great experience…' Nah, nah, nah. I'll take that deal when it's a great experience. They gave all the nuance to Adam Driver, all the nuance to Daisy Ridley. Let's be honest. Daisy knows this. Adam knows this. Everybody knows. I'm not exposing anything."

A judge granted former "The Bachelor" star Cassie Randolph a temporary restraining order against ex-fiancé Colton Underwood on Sept. 14. Cassie alleged that Colton, who headed season 23 of the "The Bachelor," was harassing her and her family and even put a tracking device on her car. Colton must now stay at least 100 yards away from Cassie, her home and her workplace. In her complaint, Cassie attached several text messages from Colton that she claims show stalking. "Ms. Randolph's friend, Caelan, visited her at her apartment. Mr. Underwood somehow immediately knew, and obsessively called and sent text messages to Ms. Randolph about the visit. Ms. Randolph was startled that he knew who was coming in and out of her apartment and felt like she was being watched," court records state. The restraining order expires Oct. 6.

Britney Spears has asked a court to open up her conservatorship case and make it public. On Sept. 3, the pop star, via her lawyers, filed paperwork to suggest that she doesn't trust her father, Jamie Spears, or his handling of her conservatorship, which has guided Brit's life since 2008. She also sided with the #FreeBritney movement, which has argued vehemently for the singer to be released from the conservatorship. Britney's legal team said there's no reason to keep the case private since no sensitive issues regarding her minor children will be disclosed. "Britney herself is vehemently opposed to this effort by her father to keep her legal struggle hidden away in the closet as a family secret," court records state. "Far from being a conspiracy theory or a 'joke' as [Jamie] reportedly told the media, in large part this scrutiny is a reasonable and even predictable result of [Jamie's] aggressive use of the sealing procedure over the years to minimize the amount of meaningful information made available to the public." In a separate court filing on Sept. 14, Britney said she was done performing (for now) and opposed her father trying to rehire money man Andrew Wallet as co-conservator and would rather hire a financial institution to oversee her fortune.

It's over. Cardi B is ending her marriage to Migos rapper Offset. On Sept. 15, the "WAP" rapper filed for divorce in Georgia. Initial reports implied that the split was contentious, but on Sept. 16, Cardi amended her filing to indicate she wants a peaceful split. Cardi "reiterates her desire for an amicable resolution," the court documents say. Contrary to initial reports, she also wants Offset to have joint custody of their 2-year-old daughter, Kulture, and she doesn't want any support from him. There was early speculation that the duo was splitting because Offset had cheated again, but Cardi spoke up on Instagram to tell fans cheating isn't the issue. The real reason for the split, she said, is because they argue too much.

Where to begin?! In mid-September, Kanye West unloaded on the music industry and the NBA, taking to Twitter to call them a "modern day slave ship." Soon, the rapper began advocating for artists and athletes, especially Black artists, to free themselves from their contracts. He then took his feud to another level. On Sept. 16, he posted a video to Twitter that appears to show him urinating on one of his Grammys. The video shows the award in a toilet. "Trust me … I WONT STOP," Kanye captioned the video, an apparent reference to his record label feud. Earlier in the week, Kanye had been railing about Universal Records not selling him his master recordings. He then uploaded copies of his 10 Universal Records contracts and implored "every lawyer in the world" to look at them. Reports then revealed Kanye was temporarily kicked off of Twitter after posting the toilet video. On top of all this, Kanye also claimed he would help longtime nemesis Taylor Swift get her master recordings back from music exec Scooter Braun, who's a close friend. In the wake of his behavior, reports claimed that Kanye's wife, Kim Kardashian West, is mulling a divorce.

The single life! Teresa Giudice and Joe Giudice have legally gone their separate ways. On Sept. 2, reports indicated that the "The Real Housewives of New Jersey" stars had finalized their divorce, officially ending their 20-year marriage. The couple had announced last year that they were splitting. The divorce news came around the same time Teresa put their family home on the real estate market for $2.5 million. "Teresa's just ready to start a new chapter," a source told Page Six. Teresa later confirmed the news.

Denise Richards is bidding "Housewives" adieu. On Sept. 9, the actress's rep announced that after two years on the show, Denise would not be returning to "The Real Housewives of Beverly Hills" for a third season. The exit came amid months of drama surrounding an allegation that Denise had an affair with former "The Real Housewives of Beverly Hills" star Brandi Glanville. Many fans were quick to blame Lisa Rinna for Denise's exit. Meanwhile, on Sept. 22, "RHOBH" cast member Teddi Mellencamp confirmed that she's also out after three seasons. "I recently found out that my contract as a 'Housewife' is not being renewed," she said in an Instagram video, adding that "tt feels like a breakup."

We have an elopement! On Sept. 7, actor David Harbour and music star Lily Allen tied the knot in Las Vegas… and yes, an Elvis impersonator officiated the wedding. According to their marriage certificate, the duo said "I do" at the Graceland Wedding Chapel. The post-nuptial meal? In-N-Out burgers. Two days later, Lily posted several photos from the low-key wedding  to Instagram alongside heart emojis. David, too, posted a few images. "In a wedding officiated by the king himself, the people's princess wed her devoted, low born, but kind credit card holder in a beautiful ceremony lit by the ashen skies courtesy of a burning state miles away in the midst of a global pandemic," he wrote. "Refreshments were served at a small reception following."

"Iron Chef" star Cat Cora claimed her ex-wife is trying to "destroy" her life via cyber-stalking, abuse and inflicting mental and emotional distress. The famed chef is now asking a court to grant her a restraining order against her ex, Jennifer. Cat argues that Jennifer has made her life "a nightmare that I can't wake up from." In her court filing, Cat, who shares four children with Jennifer, said her ex is "an uncooperative co-parent." She also detailed other alleged incidents painting Jennifer's behavior as confrontational or harassing. "She has never cared if I needed to be with my mom, or the kids or anything," Cat claimed in her petition for a restraining order. "Her whole goal in life is for me to fail, be destroyed, not have a relationship with the kids, for everyone to know I am a BAD person. … She is desperately trying to make me seem like a bad person, bad mother, anything to hurt me." Cat's current wife, music exec Nicole Ehrlich, is also seeking a restraining order against Jennifer. While speaking to Page Six, Nicole said of Jennifer, "Her power and happiness come from making Cat miserable."

Amy Schumer made a personal reveal about her health on Sept. 8: She has Lyme disease.  "Anyone get LYME this summer? I got it and I'm on doxycycline. I have maybe had it for years. Any advice? Can you have a glass of wine or 2 on it?," she wrote on Instagram. "I know to stay out of the sun. I'm also taking these herbs from cape cod called lyme-2." Amy added that she feels good and is "excited to get rid of it." 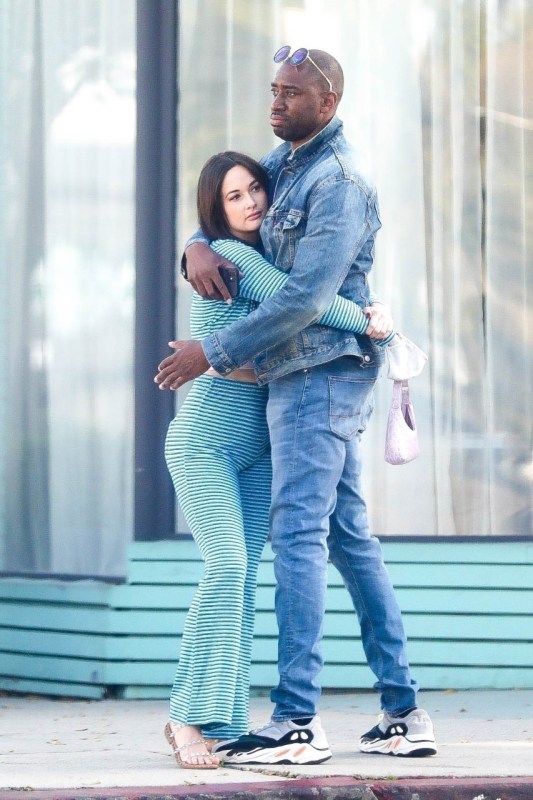