Luann de Lesseps has reportedly pled not guilty to charges related to her Dec. 24 arrest in Palm Beach, Florida, according to TMZ. Although the "Real Housewives of New York" star apologized in a statement to Page Six for her alleged booze-fueled outburst, which reportedly involved kicking a police officer, among other things, she reportedly entered the not-guilty plea shortly before New Year's. The 52-year-old was charged with five crimes including battery on a law enforcement officer and resisting arrest with violence, plus two counts of corruption by threat, all of which are felonies. She's also been charged with disorderly intoxication. Luann reportedly entered a treatment program after the incident. "This was my first time in Palm Beach since my wedding, and being here brought up long-buried emotions," Luann told Page Six after her arrest, referencing her ex-husband, Tom D'Agostino. "I want to offer my sincere apologies to anyone I might have offended with my behavior. I am committed to a transformative and hopeful 2018," she said.

After spending Christmas with the royal family in London, Prince Harry and his fiancee Meghan Markle left the country for New Year's, flying first to Nice, France — in economy class — then catching a ride on a helicopter to Monaco. Insiders tell the Daily Mail that the couple was protected by bodyguards in the back of the plane on the way to Nice. Once they arrived in France, they reportedly had some extra help in the form of France's elite Service de la Protection, which the Mail reports generally looks after "foreign dignitaries." Said a source: "After what happened to his mother in this country and the issue of terrorism, it would be insisted on even for a private trip such as this." The lovebirds were expected to stay on French Riviera ad catch up with friends for a few days in a private residence before returning to London.

With their third child due this month via surrogate, Kim Kardashian West and Kanye West couldn't be more relieved their youngest son Saint is back at home and recovering safely from his recent bout with pneumonia. The 2-year-old was reportedly hospitalized in Los Angeles for a few days between Christmas and New Year's before being released on Saturday, Dec. 30. On Monday, Jan. 2, TMZ checked in with Kim, who used the opportunity to express her deep appreciation for the medical staff that helped her son as well as those in the industry who help others in need. "I just want to [thank] every nurse and doctor out there who works so hard around the clock," she said. "We are so grateful for you all!"

Like Jessica Alba and Cash Warren, who welcomed a baby boy on Dec. 31, Natasha Bedingfield and her husband Matt Robinson rang in the new year with a visit from the stork. On Monday, Jan. 1, the singer shared a photo from her hospital bed that showed a coffee cup marked "mum." "Omg! Guess what just happened at the very end of this year! The happiest new Year ever!," she captioned the shot (via Us Weekly). Natasha announced the exciting news back in October, writing on Instagram, "Matt and I are thrilled to share with you all that we are bringing a new little life into the world! We can't wait to embark on this amazing journey together." Congrats!

Hoda Kotb's 'Today' colleagues congratulate her on her promotion

In what Savannah Guthrie hailed as "the most popular decision NBC News has ever made," the "Today" show announced Hoda Kotb will replace Matt Lauer in the wake of his firing over sexual misconduct allegations. Among the fans celebrating the news were Hoda's "Today" show colleagues, many of whom posted about their excitement on social media on Tuesday, Jan. 2. "So happy for my dear friend @hodakotb !! Congratulations on being named the new Co Anchor of @TODAYshow !! Nobody does it better!!" Kathie Lee Gifford tweeted (via Us Weekly). Al Roker chimed in as well, posting, "A hearty #congratulations to @hodakotb officially our new @TODAYshow #cohost with @SavannahGuthrie," while Megyn Kelly wrote, "Congrats to the awesome and talented @hodakotb on her well-deserved new role as co-anchor of @TODAYshow. Love you Hoda!" Carson Daly gushed about the announcement as well, writing, "Congrats @hodakotb on your well deserved promotion! We love you!" Speaking to Hoda on the air on Tuesday, Savannah punctuated her congratulations by assuring the new co-anchor, "You are a partner and a friend and a sister and I am so happy to be doing this."

Diddy just might be Hollywood's New Year's Eve host with the most … compassion for drunk guests (ahem). In a video posted on TMZ, the Bad Boy Records founder can be seen stopping to help a woman who appears to be so inebriated she's slumped over some furniture at the party at Diddy's home in Miami. Having already unleashed the contents of her belly on her own coat, the woman looks like she's passed out when Diddy politely wakes her and hangs on to her so she can get herself together as she comes to. In addition to Diddy's co-hosts DJ Khaled and Kenny Burns, partygoers included Future, Travis Scott, Wiz Khalifa, Gabby Sidibe, G-Eazy, Young Jeezy, Cassie and NeNe Leakes.

Atta girl! Mother of two Kate Hudson took a few moments on New Year's Eve to remind fans, friends and Instagram followers that the biggest party night of the year is no time to get behind the wheel for those who plan to imbibe. "I'm partnering with @lyft making sure we all have a safe new year!!!" she wrote on Instagram alongside a photo of herself in the passenger side of her ride for the night. "Thank you for the Lux rides 🙏 And this is my friendly reminder to all…. PLEASE STAY SAFE ❤️ CALL A LYFT!!!" she added. Gwyneth Paltrow partnered with Lyft as well, posting a similar message.

Back in the '80s, "E.T." star Drew Barrymore was busy winning American pop culture's collective heart as much with her precocious red carpet ways as with her acting. Fast forward a few decades and the producer, beauty brand developer and actress and is still busy — but in a different way. As a mother of two girls, Drew loves being home with her kids as much as possible and jokes to InStyle in the magazine's February cover story that unlike her 10-year-old self, who was obsessively out and about in Hollywood, "you'd have to take a crowbar and a spatula and a forklift to get me out of the house now." "Today I picked Frankie up at the playground, and she let her cheek rest against my lips for a really long time. So I just hummed a song and didn't really move so as to not break the moment," she says. "My girls make me stop — stop thinking and rushing and needing to do … They make the whole world totally stand still. They are the love I've always wanted to know." Asked what she'd tell her old self about love, Drew, who split from her daughters' dad Will Kopelman in 2016, in has trouble even thinking in those terms. "My daughters are so fulfilling that I feel like my cup is just avalanching over," she explains. "If love took on a physical analogy form, I'd be an overstuffed turkey or a piñata. So I'm not really hungry for it at this moment. I don't think I would have ever known that I could be this content, this whole, without being in a romantic relationship. That would have been a surprise to my younger self."

Sometimes ya gotta be tough in this world. That's the message Halle Berry was offering on Instagram as the year came to an end over the weekend. "Dear 2017, you can be a good person with a kind spirit and still tell people to go F— themselves when needed," she wrote on Instagram on Monday, Jan. 1, adding, "P/S… thank you middle finger for always standing up for me!" While Halle's middle finger stood up for her in 2017, the actress also made a commitment to stand up for other women going into 2018. On Monday, Jan. 1, she joined hundreds of Hollywood A-listers in supporting Time's Up, a legal defense fund for those in entertainment dealing with sexual harassment and assault. "Time's up on silence. Time's up on waiting," Halle wrote on social media. "Time's up on tolerating discrimination, harassment or abuse. Sign the solidarity letter & donate to the @TIMESUPNOW Legal Defense Fund: Link in bio."

Russell Brand opens up about taking 'time out' after feeling lost

Russell Brand, who released "Recovery: Freedom From Our Addictions" last fall, has been sober for more than 14 years. He's only been a dad for a year, though, and as he recently told InTouch, parenthood marked a major step forward for a guy whose battles with drugs and alcohol nearly killed him. "I feel awakened and peaceful and connected and less in need of other people's approval. [Fatherhood] changed everything," Russell tells the tab. "With drugs and alcohol, the rock bottoms tend to be pretty obvious because they involve police and ambulances. But in ordinary life, any moment where you find yourself despairing and hopeless can be a rock bottom. For me, that can happen pretty easily." He went on to say a recent career focus change made it hard for him to be the person he wanted to be, so he took a break. "A couple years ago when I was so heavily involved in politics in the UK, I got a lot of negative heat and press attention and felt a little bit lost in the world. I felt like I could walk away from everything in my life. I didn't feel connected to anything," he explained. "I took time out … and now my life is completely different. I listened to that feeling. I treated it as a signal, a message, an opportunity for change. Now I live a different life." Russell wed Laura Gallacher in August; their daughter Mabel was born in 2016. 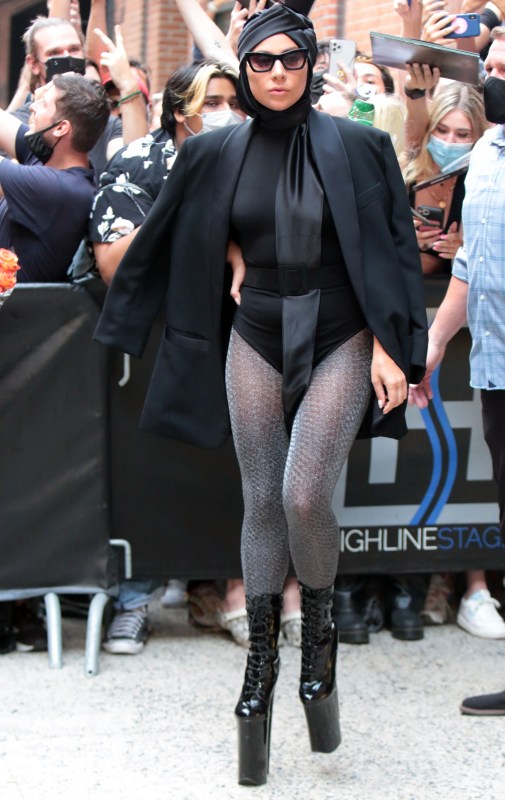 Up Next Gaga's Back