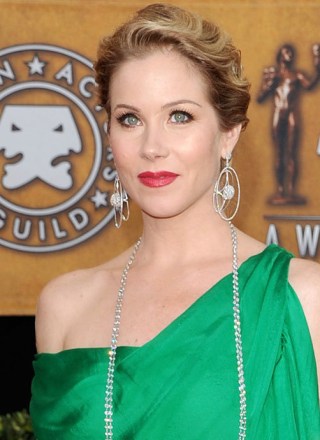 Born to a record exec and an actress, Christina Applegate started acting before she could walk, appearing in an episode of "Days Of Our Lives" when she was just 3 months old alongside her mom. By 3, she was voicing radio commercials and quickly moved on to episodic TV ("Charles In Charge", "Family Ties" and "21 Jump Street"). She joined the dysfunctional Bundy family in 1987 on "Married? With Children." Although no one has high hopes for the raunchy comedy, it quickly became Fox's No. 1 show, ran for 11 seasons and made the tube top-wearing blond a teen boy fantasy. Her next TV vehicle, 1998's "Jesse", gave her the chance to play someone more mature — a feisty single mom. She married actor Jonathon Schaech in 2001 after the constant costars had dated for four years. "The Sweetest Thing" (2002) and "Anchorman" (2004) were standouts of her film career. After a guest spot as on "Friends" nabbed her an 2002 Emmy, she received a Tony nod for her 2005 Broadway debut in "Sweet Charity." Her good fortune had its limits as she and Schaech filed for divorce the same year. Just after launching her 2007 TV comeback "Samantha Who?", which earned her Emmy and Golden Globe nominations, Applegate was diagnosed with breast cancer and underwent a double mastectomy. Happier days followed when she was covergirl for People's 2009 Most Beautiful issue, got engaged in 2010 to musician Martyn LeNoble and welcomed daughter Sadie Grace in 2011. The couple made it official two years later.