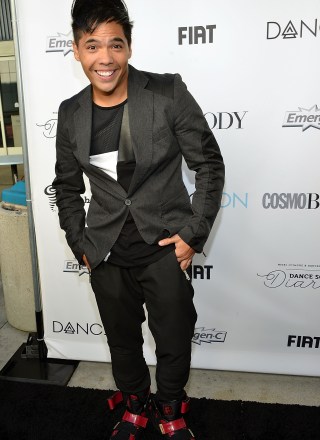 Share Tweet Pin Email
Dominic "D-Trix" Sandoval has taken YouTube by storm with his dancing and rapping skills, not to mention his food challenges and relationship advice videos. He has two YouTube channels: "theDOMINICshow," with nearly 3 million subscribers, and "RANDOMinicSHOW," which, as its name implies, features more random videos and has close to 1 million subscribers. One of his most popular clips is about planking, and while the fad may have gone away, people still want to watch him do it: As of March 2016, "Teach Me How to Plank" had nearly 7 million views! Born on Oct. 15, 1985 in Roseville, California, D-Trix was adopted at age 2. At 13, he started breakdancing, and he's been showing off his skills ever since. He was a contestant on the third season of "So You Think You Can Dance" in 2007. In 2009, he competed along with the rest of his dance colleagues, Quest Crew, on the third season of "America's Best Dance Crew"  — and won! He's also judged the show. D-Trix also appeared in Panic! At the Disco's 2011 music video for "Ready to Go (Get Me Out of My Mind)" as a background dancer. He's also a member of the musical group YTF (Yesterday, Today, Forever) and released a music video that stars his adorable niece, Maycee Heise, to accompany his humorous single, "Worst Babysitter Ever."