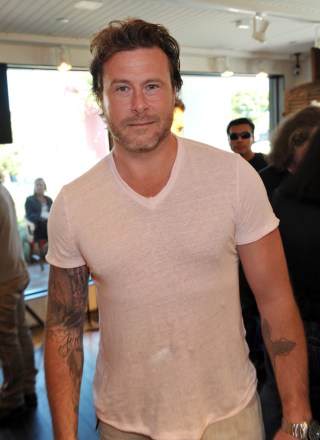 Dean McDermott has worked as an actor since the late '80s, doing one episode after another of forgettable TV series like "Kung Fu: The Legend Continues" and "Nancy Drew" and several cheesy TV movies. He landed recurring roles in "Due South" (1995-99), "Tracker" (20001-02) and "Earth: Final Conflict" (1999-2002) and guest bits on less forgettable shows like "The Closer" or "NCIS," but his true claim to fame will be as Tori Spelling's cheating husband. He fell in love with Spelling in the summer of 2005 on the set of their TV movie "Mind Over Murder." The only issue was that the then father of two was still married to his wife of 12 years, Mary Jo Eustace, and Spelling had tied the knot a year earlier. He filed for divorce in September, Spelling announced her split a week later, and by May 2006 they married in Fiji. The duo used her inheritance and proceeds of a garage sale to open a B&B in Fallbrook, Calif., which was the basis of a 2007 hit reality show on Oxygen called "Tori & Dean: Inn Love." The show moved back to Hollywood with them for another season. He has 4 kids with Spelling: Liam (March 2007), Stella (June 2008), Hattie (October 2011), and Finn (August 2012). In January of 2014, amid cheating rumors, McDermott checked into rehab for health and personal issues. He later admitted the rumors were true on an episode of their latest reality program, "True Tori," on Lifetime.