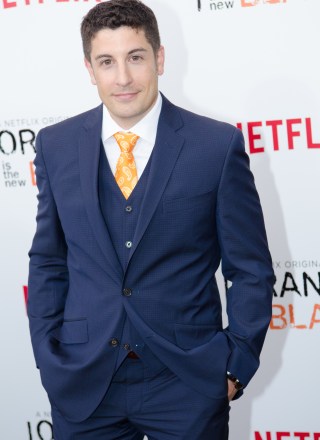 Although most people became aware of Jason Biggs when he got busy with baked goods in 1999's smash  "American Pie," he'd already been in the business for quite some time. He started with modeling and commercials as a small kid and before he was out of his teens, he'd made his Broadway debut in "Conversations With My Father" with Judd Hirsch, been cast in a TV series ("Drexell's Class"), earned a Daytime Emmy nod for "As The World Turns" and gotten his first movie role in 1997's "Camp Stories." Besides the three Pie sequels, he chose a lot of forgettable comedies ("Jersey Girl," ""Loser," "Saving Silverman") and a few underperforming indies like Woody Allen's "Anything Else" and "Prozac Nation." After tackling lead on a short-lived sitcom called "Mad Love" in 2011, he laid low until joining the cast of mega-hit "Orange Is The New Black" in 2013.He married "Angel" actress and "I Like You Just The Way I Am" author Jenny Mollen in 2008 and they welcomed their first son, Sid, in February 2014.