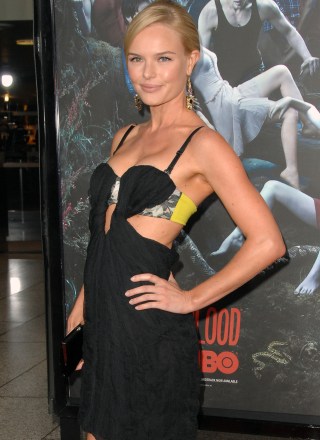 Share Tweet Pin Email
When Kate Bosworth auditioned for Robert Redford's Horse Whisperer, she was so green that she had to use the family Christmas card as her headshot. She got the part thanks in part to her champion equestrian skills, but after production ended she put Hollywood on hold until after she completed high school. But she nixed plans for Princeton after scoring roles in the short-lived CW series Young Americans and Remember The Titans. She caught her big break — Literally! — on the surf film Blue Crush (2002) for which she put on 20 pounds of muscle and learned to hang 10. The blonde beauty with two different colored eyes has mixed edgy indies (Rules of Attraction, Wonderland, Black Rock) with studio fare (Win A Date With Tad Hamilton!, Superman Returns, 21) and a healthy dose of modeling (Calvin Klein) ever since. The waif constantly on tabloids' anorexia watch has a tendency of finding love on location. She dated her YA costar Matt Czuchry from 2000-2002, met four-year beau Orlando Bloom on a Gap ad shoot in 2002 and found puppy love with Alexander on Straw Dogs in 2009. She got engaged to Michael Polish, who directed her in the upcoming Big Sur, in the fall of 2012 after they debuted as a couple at a 2011 Coldplay concert.