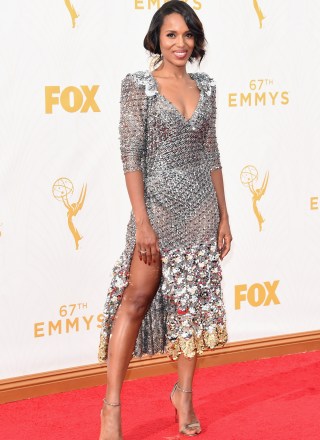 Kerry Washington's career has come full circle with ABC. She earned her SAG card on an Afterschool Special for the network called Magical Makeover in 2000 and is now the must-see Thursday night lineup's leading lady. The George Washington University alum, who briefly lived in India studying yoga, worked her way up to gladiator status with movies (2000's Save The Last Dance, 2004's Ray, 2007's Mr. & Mrs. Smith, the Fantastic Four franchise and 2012's Django Unchained), Broadway (she made her debut in 2009's Race) and spokesmodel gigs (L'Oreal Paris hired her in 2006). Landing fixer Olivia Pope on Scandal made her the first African-American female lead in a network drama in 40 years and earned her a 2013 Emmy nod. Previously engaged to actor David Moscow(It was called it off in March 2007 after 3 ringed years), she wed now-retired pro football player Nnmamdi Asomougha in Idaho in June 2013 after dating three years in secret. The couple welcomed daughter Isabelle in April 2014.