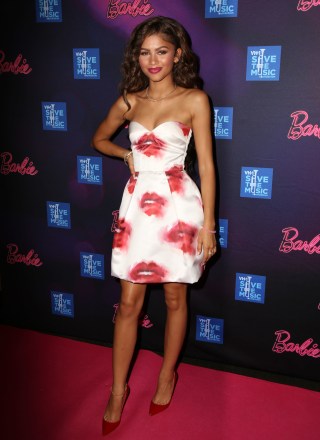 Zendaya, the daughter of a stage manager whose name means to give thanks in a Zimbabwe dialect, spent her early years hanging around and eventually appearing in productions at the California Shakespeare Theater and other theatrical companies near her Bay Area hometown where she also attended the Oakland School for the Arts. After finding early success as a model for AMcy's and OIld Navy and a back-up dancer in a Selena Gomez Sears commercial, she made her television debut in 2010 on Disney Channel's popular comedy Shake It Up with Bella Thorne. She continued her tween domination with the 2012 TV movie Frenemies, appearances on Good Luck Charlie, a new show called K.C. Undercover, a recording deal with Disney's Hollywood Records in 2012 and by authoring an advice book, Between U and Me, in 2013. The same year she competed on Dancing with the Stars. In 2015, the Black-ish guest star found herself in the midst of controversy when E! Fashion Police's Giuliana Rancic made comments about weed and patchouli in regard to her dreadlocked Oscar look that many people found racist.  Zendaya got the last laugh when Chi Hair Care made her a spokesperson and Mattel decided to immortalize the look as a Barbie. She also announced her shoe collection Daya (her childhood nickname) in 2015