While serving as vice president and head designer of Versace over the last few decades, Donatella Versace has kept the brand at the forefront of the fashion world. The blonde icon has always recognized the importance of the relationship between fashion and celebrity, and by harnessing the support of superstars, she continues to maintain the Versace name's global fame. In honor of the dynamo Italian designer's 66th birthday on May 2, 2021, join Wonderwall.com as we take a look at her life and career in photos. Keep reading for more…

Donatella Versace joined a fashion-forward family when she was born on May 2, 1955, in Reggio, a town in Italy's Calabria region. Older brother Gianni Versace was an up-and-coming designer, and their mother had a dressmaking business. She's seen here with Gianni in Paris in 1990.

RELATED: Stars not wearing makeup in 2021

Donatella Versace picked her trademark look early on, and she credits brother Gianni Versace with dyeing her hair its signature platinum blonde shade when she was 11. She once told Harper's Bazaar, "I have never looked back." She's seen here at the 2005 Vanity Fair Oscar Party.

Gianni Versace started his company in Milan in 1978, and his sister Donatella Versace and brother Santo Versace helped out with the business. Donatella is seen here with Gianni at a Rainforest Foundation Benefit in 1994.

Donatella Versace started designing for the company's Versus line in the 1980s — brother Gianni Versace created the line as a gift to her. Donatella's friendships with celebrities including Madonna and Elizabeth Hurley would later help the brand gain notoriety. Donatella is seen here with Liz during London Fashion Week in 2005.

In the early 1980s, Donatella Versace married former Versace model Paul Beck. The pair had two children, Allegra and Daniel, but split in 2000. The family is seen here in 1992.

Gianni Versace was tragically murdered in Florida in July 1997. Donatella Versace then became the creative director of the Versace group. "When my brother was murdered, I had the eyes of the whole world on me and 99% of them thought I wasn't going to make it. And maybe I thought the same, at first," she told The Guardian in 2017. "My brother was the king, and my whole world had crashed around me." She's seen here with brother Santo Versace at Gianni's memorial service in Milan in 1997.

1997 was a tragic year for Donatella Versace. Less than two months after the murder of her brother, fashion designer Gianni Versace, family friend Princess Diana was killed in a Paris car accident. Donatella is seen here at the Princess of Wales' funeral in September 1997 speaking to fellow designer Karl Lagerfeld as brother Santo Versace looked on.

On Feb. 23, 2000, Jennifer Lopez wore a green Versace dress with a plunging neckline to the Grammy Awards, and the look was instantly iconic. It made the design house an even bigger household name and marked a major turning point in Donatella's life following Gianni Versace's tragic death. J.Lo's Versace dress is also credited by Google's executive chairman Eric Schmidt as the reason Google image search was created.

In 2004, Donatella Versace sought treatment for cocaine addiction, which she battled after her brother's death. "I couldn't stand the pain," she told Vogue in 2005. "I had to hide my feelings. What better way to hide your feelings than with drugs?" She also shared that it was family friend Elton John's intervention that got her into rehab. She's seen here with the music star at his annual Elton John Aids Foundation Oscar Viewing Party in 2006.

Donatella Versace designed a Versace collection for H&M in late 2011 with the intention of helping the luxury brand reach a wider audience. She assured fans the collaboration would be "quintessential Versace," and it worked: People lined up overnight to get their hands on the pieces, which ranged from $19.95 costume jewelry to a $299 leather jacket. Donatella even made an appearance at a London H&M store to meet fans. She's seen here at the launch in November 2011.

Rapper Nicki Minaj interviewed Donatella Versace for Interview magazine in December 2011 and got the designer to talk about her close friendship with Prince and the supermodels of the '90s. She also shared with Nicki one of her beliefs about fashion: "To be comfortable — that can't be in the vocabulary of fashion. If you want to be comfortable, stay home in your pajamas." Donatella and Nicki are seen here at the Versus Versace fashion show during Mercedes-Benz Fashion Week in New York City in 2014.

Did you do a double-take? In 2013, Gina Gershon portrayed Donatella Versace in the Lifetime television movie "House of Versace." In 2018, Penelope Cruz played Donatella in "American Crime Story," earning both a Golden Globe and an Emmy nomination for her work in the project about Gianni Versace's murder.

"I believe in accepting your appearance, not disliking it," Donatella Versace told Vanity Fair in the fall of 2014. As for her secret to looking young? Donatella has been known to tell reporters that she sleeps "in the freezer." She's seen here at the 2014 Met Gala in New York City.

At the 2014 Met Gala, Donatella Versace didn't hit the red carpet alone — she took daughter Allegra (whom she shares with ex-husband Paul Beck) with her! "I don't tell many people my last name," Allegra told Harper's Bazaar in 2007. "I go by Beck more than Versace." The socialite also stays away from her designer mom's famous friends. "It's not like I want my mom's friends to take care of me!"

Versace dominated the 2015 Hollywood awards season, outfitting more stars — including Scarlett Johansson and Jennifer Aniston — than any other fashion house. In March 2015, Donatella Versace told V Magazine that she sees Jennifer Lopez as an ideal Versace woman. "Versace is about strength, individuality and power. It's also about loving life, making the best of every moment, and being true to who you are. This is how I define Versace, and it's also how I define Jennifer." J.Lo and Donatella are seen here at the Versace Haute Couture show during Paris Fashion Week in 2014.

Talk about an iconic (and nostalgic) fashion moment! During Milan Fashion Week Spring/Summer 2018 in September 2017, Donatella Versace had a lineup of iconic '90s supermodels wear her confections: Carla Bruni, Claudia Schiffer, Naomi Campbell, Cindy Crawford and Helena Christensen all hit the runway with the designer.

At the 2017 British Fashion Awards, Donatella Versace won big! That evening, the designer to the stars took home the fashion icon award. "I am truly honoured to be collecting the Fashion Icon Award at The Fashion Awards in 2017," she said in a statement. "For 40 years, my brother and I have done what we love and that is a legacy I am honoured to continue and uphold. We have celebrated empowerment, joy and of course glamour. We have championed a community of people who share our values and together with them have created truly iconic images in the world of fashion. I am truly humbled by how Versace has been embraced across the decades, across the world and across the generations."

She took home another notable prize a year later. Donatella Versace won the international award at the CFDA Fashion Awards in 2018. "It means so much," Donatella told the CFDA. "So many feelings are going through my head it's almost impossible to describe it. When they told me, I did a double take! I was at home having dinner with some friends when I got the call… I couldn't believe what I was hearing! I felt humbled and honored at the same time. Receiving this award crowns a very special moment for me and for Versace and I couldn't be happier. We have worked so hard to get to this point and I am so proud of what we are achieving."

That same year, 2018, Donatella Versace became the first woman to be named designer of the year at the 20th GQ Men of the Year Awards.

At the 2019 Met Gala, which featured the theme "Camp: Notes on Fashion," Donatella Versace truly looked… divine! She sported a colorfully embellished gown with a neon green train that coordinated with her partially bright green tresses. Of course, she wore Versace on fashion's biggest night!

One of fashion's most memorable moments of 2019 came courtesy of Donatella Versace: She recruited friend Jennifer Lopez to close out the Versace show during Milan Fashion Week Spring/Summer 2020 that September. J.Lo donned a plunging green palm-print gown designed by Donatella that was reminiscent of her iconic 2000 Grammys dress. As for how the reunion came to be? The singer-actress and Donatella Versace chatted about it at the Met Gala. "We were sitting together at the table. I took a look at her, and she looked so gorgeous and she was so sweet, and she hasn't changed a bit since the first time," Donatella told Vogue's Anna Wintour. "And I said, 'Would you do it again, Jennifer?' And she said, 'Why not, let me check my schedule.' That happened in like two seconds." The designer continued, "This is what I like about her. She's very instinctive. She doesn't have to ask too many managers what to do."

At the 2019 Fashion Awards in London, Donatella Versace stood out from the crowd in a gorgeous figure-flattering pink sequined gown. She was in good company as well — the Italian fashion designer is seen here posing alongside Rihanna.

In the Spring/Summer 2021 Issue of AnOther Magazine, Donatella Versace — seen here at the 2020 Elton John AIDS Foundation Academy Awards Viewing Party — reflected on what she's learned during the coronavirus pandemic. "I learnt a great deal during lockdown. I truly understood the importance of community, of standing together to fight — I was really moved by the way we all joined in a global embrace of solidarity," she explained. "It was not only about donations and charity, but also knowing that no one was alone, that help can come in so many unexpected ways. It was really touching." 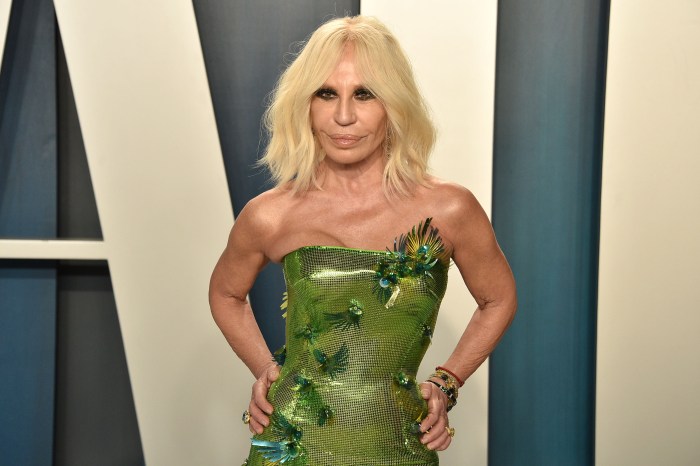 These are the stand-up comedy specials you shouldn't miss