Eric Dane is moving on. Nearly two years after his ex, Rebecca Gayheart, filed for divorce, the "Grey's Anatomy" star stepped out for an afternoon coffee date this week with actress Dree Hemingway, whose great-grandfather is author Ernest Hemingway and mother is actress Mariel Hemingway. On Thursday, Jan. 31, Eric, 46, was spotted enjoying a long conversation outside Verve Coffee Roasters in the West Hollywood section of Los Angeles, according to the Daily Mail. Photos of the two showed Dree, 31, looking engrossed by her date, who the Mail reports looked similarly eager to her every word. Eric and Rebecca had trouble long before they finally separated in 2017. Rebecca has since said that they're doing their "best" to coparent their daughters, but admitted, "it isn't easy."

We wouldn't have known it from those lush "On The Run 2" performance looks, but it seems Beyonce is still rocking a shiny, silver belly button ring. The singer shared a new batch of photos of herself on her website and social media this week that showed her decked out in rainbow shades and the super sleuths over at The Blast noticed the glimmer of early aughts style peeking out from her flowing top. The website also took a spin in the Bey time machine to let us know she's been on the belly button train since at least 2003.

A certain pair of celebrity lovebirds took their romance to Madison Square Garden this week for Justin Timberlake's 38th birthday throw-down-slash-concert. Emily Blunt and John Krasinski were among the many famous faces in the VIP general admission section for the show, according to a Page Six spy, who noted the couples spent time rocking and funking out to the singer's "Man of the Woods" material with Trevor Noah and "Chappelle's Show" co-creator Neal Brennan. Before the show, Jon snapped some shots with fans, then beelined to his section, which was apparently quite the MSG hotspot. ?uestlove — who joked on social media that nobody would have figured him for a JT fan — was there, as well. The birthday boy, meanwhile, didn't spend the whole night working. At one point his band brought out a cupcake for the singer as the whole audience serenaded him with "Happy Birthday."

RELATED: The cutest couples at the 2019 Critics Choice Awards

Are the Clooneys headed for a split? Doubtful — and Amal Clooney's recent hang with Cindy Crawford, her pal through her marriage to George Clooney, is just one of multiple reasons we're not buying the Radar-sparked rumors. The tab has claimed the Clooneys are on the verge of a divorce, citing their lack of appearances together as example A. In fact, the two stepped out hand-in-hand in New York City as recently as last month, according to Gossip Cop. This week, the Daily Mail spotted Amal and Cindy enjoying a girls' night out on the two together in Los Angeles — a move that seems unlikely given how long Cindy's friendship with George predates her friendship with Amal. There were, by the way, no discernible tears or sad faces on either of the ladies as they headed to a restaurant for dinner. Cindy and her husband, Rande Gerber, long shared a vacation compound with George in Mexico, where Rande and the actor dreamed up their tequila business way back when.

With her 65th birthday just around the corner on Saturday, Feb. 2, Christie Brinkley is looking back on her life and career — including her biggest regret. "I didn't do Saturday Night Live when they asked me," she said in a new interview with ET. "God, what was I thinking?" she asked, clearly still mad at herself for the missed opportunity. The ageless beauty also opened up on the differences between being in her 60s and being in her 20s (even though she arguably looks no older than 40!). "You just don't date that much,"she said of being almost 65. What she DOES still do, though, is criticize her looks.( Somehow?!) She says she's been doing that for many years. After looking on archival pics from 1983, she told ET, "I remember posing for that picture, thinking, 'What am I going to with my hips? Where do I put them so I don't look so large?'" Um, no comment …

Hayden Panettiere opens up about coparenting with Wladimir Klitschko

When it comes to coparenting, Hayden Panettiere and her ex, Wladimir Klitschko, seem to have things down pat. The former couple split last August, but as she told Us Weekly on Thursday, Jan. 31, they still "get along" just fine. "We're still respectful of each other, and we still have that friendship with each other," she said. "It's not a situation that you find yourself in all that often, so it's a new one. But I think we've done a really good job." As for the specific approach they're taking with their 4-year-old daughter, Kaya? "We're trying to do the book smarts and the street smart," she quipped. "So, you know, trial and error as a parent. … We're all going to make mistakes."

In the wake of what authorities believe may have been a hate crime against Jussie Smollett, Ellen Page is demanding change. And she wants it to come from the top. "It feels impossible not to feel this way right now with the president and the Vice President Mike Pence, who wishes I could not be married, let's just be clear," Ellen, who is married to Ellen Portner, told Stephen Colbert on "The Late Show" this week, according to THR. "The vice president of America wishes I didn't have the love with my wife. He wanted to ban that in Indiana, he believes in conversion therapy, he has hurt LGBTQ people so badly as the governor of Indiana," Ellen continued. She went on to point out that there's a clear connection between the positions of those in power and the acts of violence the LGBTQ community is facing. "If you are in a position of power and you hate people and you want to cause suffering to them, you go through the trouble, you spend your career trying to cause suffering, what do you think is going to happen? Kids are going to be abused, and they're going to kill themselves and people are going to be beaten on the street," she said, adding that she's "met the marginalized people you can meet" on her Viceland show "Gaycation." "I am lucky to have this time and the privilege to say this," she noted in conclusion. "This needs to f—– stop." Jussie, one of the stars of "Empire," was brutally attacked in Chicago earlier this week. He reportedly arrived home with a noose around his neck. He previously received a homophobic and racist threat in a mailed letter.

Earlier this week, a preview of People's new Anne Hathaway cover story revealed the star went through a phase where she wasn't eating, she was full of anxiety and, as she put it, she was "smoking her nerves" away. In the full interview, she elaborates on her weight struggles, opening up about how the experience of playing Fantine in 2012′s "Les Misérables" was so intense she ended up suffering for a long period of time after the weight loss as well. "I'd lost an unhealthy amount of weight in two weeks. I didn't know anything about nutrition. I taxed my body, and my brain bore the brunt of it for a while. I just felt very anxious and very lost at that time," she explained, according to JustJared. "That weight loss was not a long-term good thing for my health, and it took a really long time to come back from it. And I was still really sick because of it. I had just turned 30. I had just gotten married. Even the most positive thing can be upheavals to your identity. So to just have this moment and not really know who I was — and the moment when you just feel like you're on display — it wasn't a comfortable feeling. And I didn't do what I hoped that I would if I ever found myself in that moment," the "Serenity" star continued. Ultimately, she said, "Life went on beyond it." adding, "I feel much emptier now. It would have been nice if had happened then, but I'll still take it."

Apparently, the recent swath of celebrity-sponsored mental health awareness campaigns have not made it onto Michael Rapaport's radar. Because when the "Atypical" star stopped SiriusXM's "You Up With Nikki Glaser" on Wednesday, Jan. 30, and was asked about the backlash he faced after tweeting criticism of Ariana Grande's looks and Pete Davidson's disturbing social media note last month, he simply doubled down on his original disses. He also blamed Ariana — who's been struggling after a year in which a terrorist attacked her concert and her ex-boyfriend overdosed — for Pete's post. "This is f—— Ariana Grande's fault," he snapped, according to Us Weekly. He then boasted: "I'm not apologizing for this s— anyway … 'cause in 20 years she's going to be like Mariah Carey, f——up the lyrics to her own song, drunk at a New Year's thing." Finally, he slammed Pete for not apologizing for posting he didn't want to be "on this earth anymore." Said Michael: "The fact that [Pete Davidson] has come back and didn't acknowledge, 'Yo, to all my fans, to the New York City Police Department, to the people I work with and all my fans that were worried, I apologize for [the post].'" Calling the lack of an apology "bull—-," among other things, he said, "We're glad you're good, but you freaked everyone out." And we wonder why celebrities take breaks from the spotlight …

Is this James Corden's next "Carpool Karaoke" guest? Taylor Swift's fans sure think so. Swifties attacked James on Wednesday, Jan. 30 after he tweeted, "Some of you have never had to harmonize with a grammy winner while driving and it shows." It seemed innocent — until one Taylor fan asked for the scoop and he replied in "Reputation" font, according to E! News. "I beg your pardon," he posted in response to comment that read, "Change your font and don't know how to act, huh?" After toying with their emotions for a while, James bailed on the convo, sadly, without confirming the guest. 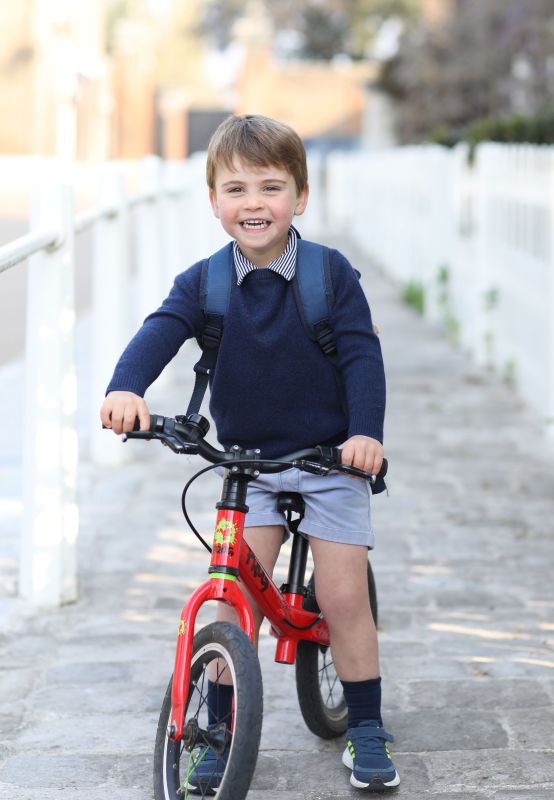 Up Next Louis turns 3