In a recent interview with InStyle, Jon Hamm admitted being single "sucks" after having spent 18 years with his ex, Jennifer Westfeldt. If there's any truth to a new report from the New York Post, however, things could be looking up for the former "Mad Men" star. A spy tells the tab sparks were flying between Jon and Kate Beckinsale at a screening of his new film, "Baby Driver" in Los Angeles this week. "They were flirting and he kept going back to her all night," said the snitch. "It was like he couldn't leave her. She had a friend with her, but they were kind of ignoring her and just talking to each other. He was leaning in to talk … [Kate] was laughing and giggling." Jon split from Jennifer in 2015, while Kate responded to Len Wiseman's petition for divorce in April.

RELATED: The hottest duos at the 2017 Met Gala

Charlie Sheen has a new girlfriend

There's a new lady in Charlie Sheen's life. A paparazzo caught up with the "Two and a Half Men" alum as he was leaving a celebration for his daughter, Lola, at Giorgio Baldi in Santa Monica on Thursday, June 1. While chatting with the pap, Charlie beckoned a young blonde woman to join him on camera. "It's my daughter's birthday," he explains in a video posted on TMZ. "She's 12. This is my girlfriend, that's Jules. No one's got a photo of us yet." Though he said little else about Jules, Charlie did share his thoughts on Donald Trump's decision to leave the Paris climate agreement. "It's a dark day for planet earth," Charlie said. Since announcing he's HIV-positive, the actor has been spending more time in Mexico, where he reportedly owns a home.

In honor of Gay Pride Month, Billboard invited dozens of celebrities to write "love letters" to the LGBQT community. Selena Gomez, who forked over the proceeds from a concert in North Carolina to a group fighting the controversial "bathroom bill," was among them. "I remember as a young child going to brunch on Sundays with my mom and her group of friends," she begins. "I had no idea they were all gay as I didn't even comprehend what that meant at the time. All I knew is that I loved being surrounded by these kind, fun and loving friends my mother had around her. I definitely give credit to her for raising me in an environment that was incredibly open-minded and non-judgmental. She also surprised me at my 16th birthday party with a performance by the most beautiful drag queen singing my favorite song. I don't think most 16 year olds can say that!" Selena goes on to recall how watching Madonna's "Truth or Dare" helped shape her understanding of the LGBQT's history of fighting for equal rights. "I loved [the movie] and was especially struck by how groundbreaking it was for the gay rights movement and how far LGBTQ rights have come in my lifetime," she writes. "There is still a significant amount of work to do and I look forward to the day when a person is never judged, discriminated or feared for their sexuality." Other celebs sharing their thoughts on Pride with Billboard include Britney Spears, Celine Dion, Elton John, Christina Aguilera and Adam Lambert.

Sarah Silverman dishes on her relationship with Michael Sheen with ex, Jimmy Kimmel

There are no hard feelings between exes Sarah Silverman and Jimmy Kimmel — but there are plenty of jokes. Sarah stopped by Jimmy's show on Thursday, June 1, and opened up about her current boyfriend, Michael Sheen. "He's my on-again, off-again lover," she explained (via People). When Jimmy said he "didn't know about the off again," Sarah assured him they're still together despite the terminology. "No, he's on-again — I call him my on-again, off-again lover because we're apart by oceans — one ocean," she said, adding that Michael moved back to the U.K. after Lily, the daughter he shares with Kate Beckinsale, turned 18. "He was here to be near his daughter, now she's off, she's going to start her own life. She's going to [New York University]," Sarah said. Michael apparently wanted to be politically active, another factor Sarah said weighed on his choice to move back to Europe. "So he's there a lot, and then we just long for each other and we see each other and we love each other," she gushed. "You know me, I'm a loner, so it's OK." Turning her attention to Jimmy's personal life, Sarah cracked, "I'm so glad everything worked out [with you]: two kids — four kids! — two since us, so I guess it really is over." Jimmy, seemingly used to Sarah's sense of humor, shot back: "I figured that was the best way to tell you." Sarah and Jimmy dated on and off twice between 2002 and 2009.

Is Lindsay Lohan launching her own jewelry line?

Google the words "Lohan" and "jewelry" and chances are you'll see a slew of results pegged to the misdemeanor Lindsay Lohan incurred for allegedly stealing a $2,500 necklace in 2011. But hey, all press is good press, right? This week, the New York Post reported LiLo is now planning to launch a jewelry line of her own — and she's already promoting #LindsayLohanjewelry on Instagram. The actress recently shared multiple posts from Cannes with that hashtag, hinting that "something is in the works" without giving details. The jewelry collection would be Lindsay's second business venture in recent months; last fall, she and her pal Dennis Papageourgiou opened a nightclub in Lindsay's name.

Scarlett Johansson: 'There's no reason we shouldn't be talking about our reproductive rights'

Speak out and don't make apologies for who you are. That's the message Scarlett Johansson shares with readers in the new edition of Cosmopolitan, where she opens up about the importance of women being vocal about their relationships with their bodies. "When women talk about enjoying sex, it's almost forbidden. Just having a healthy sexual attitude, you are labeled as loose, wild, a slut," she explains (via E! News). "You have no morals, and you're seen as some kind of sexual deviant or someone who can't be in a monogamous relationship. The minute you talk about enjoying yourself, being curious, that is still taboo." A longtime Planned Parenthood supporter, Scarlett wants taboos stripped away from discussions about reproductive rights, too. "There's no reason we shouldn't be talking about our reproductive rights," she says. "They're something we have to fight for and continue to protect. There's nothing icky about talking about that stuff. Of course, it's private and it's your body, but we should take the stigma away." The "Avengers" star continues: "Whenever you speak publicly, it's always a risk, right? Maybe you'll lose some followers. But if you have something to say, it can be really impactful. I hope my daughter finds her voice and feels like she can engage anyone in any number of topics. I grew up in an environment that encouraged activism, so I never thought about the effect that it would have on my career at any stage. But I know it's a luxury, and not everybody has that luxury."

Sean Penn diffuses a potential fight on a plane

Sounds like Sean Penn's hothead days are behind him. According to TMZ, the actor averted a potentially ugly situation when he was boarding a Delta flight from Los Angeles to New York with his daughter Dylan recently. The website reports that after Sean and Dylan put their bags in the compartment above their first class seats, two men got "aggressive" and "rude" with the pair, telling them to move their luggage. Rather than engage with the men and their tempers, Sean reportedly told the crew what had happened and accepted a move to economy class so as not to incur any further issues with the men. Sean also declined to file a formal complaint.

What's up with Rihanna and Golden State Warriors star Kevin Durant? RiRi was courtside on Thursday, June 1, as the Warriors beat the Cleveland Cavaliers in Game 1 of the NBA Finals. By the end of the game, Rihanna had heckled Kevin at least once, yelling "brick" during a free throw. In return, Kevin seemed to stare the singer down twice when he nailed shots. After the Warriors won, a reporter asked Kevin about the seeming feud in a press conference. Kevin stayed cool and said he didn't know what the reporter was talking about, then looked at the floor. Twitter, meanwhile, blew up with replays and memes about the two. Game on?

Are there wedding bells ahead for Farrah Abraham and her on-off boyfriend Simon Saran? The blog editors at TeenMomTalkNow seems to think so. Citing a Snapchat picture of Farrah, clad in white, sitting at a romantically lit table on the beach with a large heart drawn around it in the sand, the blog describes the image as "pretty much everything you would expect from a proposal picture." The seemingly on-again couple has been in Jamaica celebrating Farrah's birthday, according to MTV.

If Kevin Bacon was completely believable as 17-year-old Ren McCormack in "Footloose," it may be in part because he went undercover as Ren at a high school before shooting the '80s classic. "I went and had that same experience for a day," he tells John Lithgow in a new episode of "Actors on Actors" (via the New York Post). "The only people that knew that I was an actor was the principal and maybe the guidance counselor. The teachers didn't know. The students didn't know," he continued. "It was terrifying. I got a real insight into literally how to play this part. It was exactly like the movie because some kids gave me a hard time, made fun of me, made fun of my hair, made fun of my clothing. I was dressed and looked like the character. Some of girls giggled and formed little groups and would whisper about me." 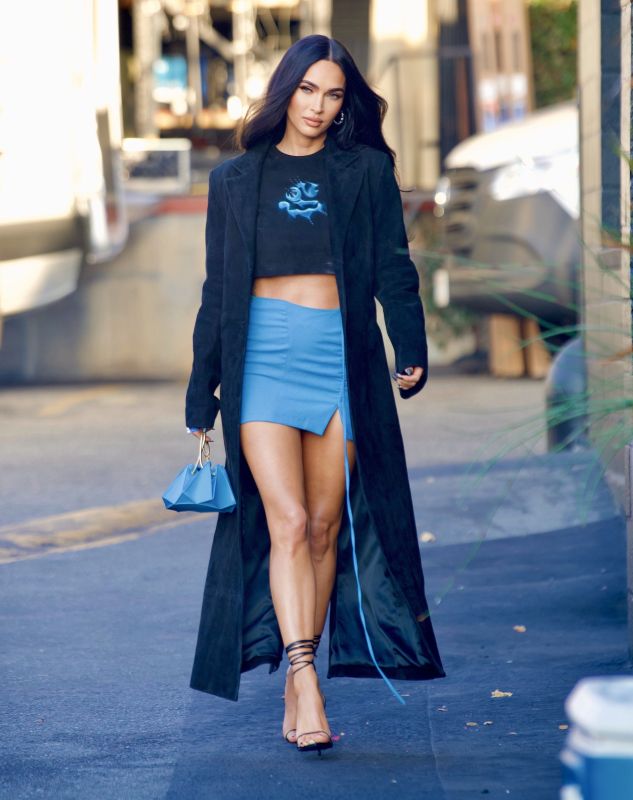