Where was Caitlyn Jenner during Kylie Jenner's pregnancy?

Now that Kylie Jenner's welcomed her daughter, fans are wondering if the reality star and makeup entrepreneur is still speaking to her father. After Kylie shared a documentary-style video about her pregnancy, social media users noticed that unlike all of Kylie's other close relatives, Caitlyn was nowhere to be seen in the footage, other than the moment in the beginning where her previous identity, Bruce Jenner, can be heard in the delivery room as Kris Jenner gives birth to Kylie. "Love how Caitlyn Jenner didn't even appear in the whole 9 months video and then it turns out she was in Ireland when Kylie gave birth," one fan posted (via the Daily Mail). Caitlyn was in Ireland last week to accept an Xpose Beauty award. Relations between Caitlyn, Kris and the rest of their family seem to have been strained for years — at least since Caitlyn used her memoir to reveal some of the turmoil she felt during her marriage to Kris. If bad blood has surfaced between Caitlyn and Kylie, it could be new; the two spent Father's Day together last June, along with Kylie's sister Kendall Jenner. "I just don't communicate with them like I used to," Caitlyn told Piers Morgan of her fading relationship with his step-daughters, Kim Kardashian West, Khloe Kardashian and Kourtney Kardashian. "It hurts but it's not the end of the world," she admitted. "Fortunately, I have a lot of children."

RELATED: Kardashian-Jenner highs and lows of 2017

"Everybody, this is not the pilot speaking. This is Jennifer Lawrence." That's how J. Law announced to passengers on a Delta flight from New Orleans to Los Angeles on Sunday, Feb. 4, that she'd taken over the plane's loudspeaker — and that she was looking for some Philly love ahead of the Eagles' showdown against the New England Patriots. "It's February 4th, Super Bowl Sunday, and we all know what that means," she declared before launching into the team's fight song, all of which was captured on video and posted to Twitter. "Can I please get a Fly Eagles fly'? Fly, Eagles fly! Fly Eagles fly!" she hollered. "There were a few cheers," another passenger later told People. The actress went on to quote the hilarious scene in "Bridesmaids" where Kristen Wiig hijacks a plane's PA and starts yammering on about a colonial woman on the plane. That's when a flight attendant intervened and tried to get Jen to chill. "… She went back to her seat and that was it. Everyone seemed fine as it was like, pretty quick," said the passenger, adding that Jen later "very happily" posed for a photo with someone in an Eagles jersey. Jennifer's "Silver Linings Playbook" costar Bradley Cooper, who grew up in the Philadelphia area, spent Super Bowl Sunday with Irina Shayk, cheering his team on to a 41-33 victory.

RELATED: Super Bowl 2018 pre-parties: See which stars spent the weekend partying down before the big game

Kevin Hart says he learned his lesson when it comes to booze during the Super Bowl. "To all the kids out, I just want to say don't drink," he said in a video posted on Instagram after the game. "When alcohol is in your system, you do dumb stuff," he added. The comedian and Philadelphia native was referring to his attempt to jump onstage with the Eagles after the won the game. (He got the boot from security soon after that.) "Me trying to get on stage with the trophy, definitely in the top two stupidest things I've ever done, but who cares, the Eagles won the Super Bowl. Yeah, I'm still a little tipsy, but the world can kiss my a–," he added. The real gem of the post, however, was what came next. In a series of dozens of hashtags including #HelpMeBabyJesus" and "#WhereAreMySocks," Kevin admitted he'd thrown up the morning after the game, that his wife suggested he probably shouldn't jump onstage with the team, that he wanted to hold the Lombardi trophy and that he "was super drunk" — and that he plans to buy an actual eagle with the money he won from the game. Did we say he learned his lesson about booze? Maybe scratch that …

Guess co-founder Paul Marciano has denied Kate Upton's claim that has used his power to "sexually and emotionally harass women." In a statement released to TMZ, the designer said, "Ms. Upton provided no details … She leveled this malicious and false accusation only hours before a gala event at our headquarters in Los Angeles unveiling a new Guess campaign. Ms. Upton told TMZ that 'I'm excited to tell my whole story.'" Kate's original tweet, which read "It's disappointing that such an iconic women's brand @GUESS is still empowering Paul Marciano as their creative director #metoo," caused a major market tumble for the brand, which los more than $250 million of its market value within 24 hours of Kate's post. Paul went on to say, "I am told that she has been working with others for some time to defame me and will claim that I groped her among other things. … This accusation is false. I have never touched Kate Upton. I have never been alone with Kate Upton. I have never acted inappropriately towards her."

Angelina Jolie takes Zahara and Shiloh to the Annie Awards

Girls' night! When Angelina Jolie headed to the Annie Awards in Los Angeles on Saturday, Feb. 3, she had two special dates for the affair — her daughters, Zahara, 13, and a very grown-up looking Shiloh, 11. The trio held hands as they walked the red carpet, smiling for cameras before they watched Pixar's "Coco" sweep the annual awards show for animated films, winning each of the 11 categories in which it was nominated.

Lana Del Rey is safe after a close call with a stalker. On Friday, Feb. 3, Orlando police arrested Michael Hunt, 43, outside Lana's show there after they were given a tip suggesting the man planned to kidnap the singer. He was charged with aggravated stalking and attempted kidnapping with a weapon, according to E! News, which reported he was still in jail as of Sunday. "Hey kiddos. I'm doing fine," Lana tweeted over the weekend. "Thanks for the messages. And tomorrow we'll be in Hotlanta can't wait to see everyone. Yachty that means u." According to E!, the alleged stalker had shared Facebook posts about his seeming obsession with Lana, including one that read, "I want to see my queen on Friday and from that day forward our decisions will be as one."

Children's Mental Health Week kicks off on Monday, Feb. 5, and Duchess Kate, who launched her Heads Together mental health charity with her husband, Prince William and brother-in-law, Prince Harry, is helping to raise awareness about the issue. "Childhood is an incredibly important moment in our lives," she says in a new video for the London charity group Place2Be (via USA Today). "It is the time when we explore our personalities, discover the potential that lies within us and learn how we be ourselves. Our experience of the world at this early stage helps to shape who we become as adults and how we begin to feel comfortable in our own skin," she continues. "Some children will be facing tougher challenges than others, but I firmly believe that while we cannot change their circumstances, we can ensure that every child is given the best possible support to ensure they fulfill their true potential. This is best achieved when we, the adults in their lives, work together to give children the emotional strength they need to face their futures and thrive."

While celebs like Bradley Cooper and Pink were celebrating the Eagles' Super Bowl win, other stars were mourning the Patriots' loss on Sunday, Feb. 4. Gisele Bundchen, who cheered for her husband Tom Brady from the stands in Minnesota during the game, shared a photo of a tender moment taken after her man's team lost. "Congratulations Eagles for winning the Super bowl, what a game that was!" she captioned the Instagram shot. "Congratulations Patriots for giving your best and to my love, we are incredibly proud of you because we are able to see [every] day all the commitment, sacrifice and hard work that you have devoted to become the best in what you do. We love you! ❤️"

Looks like Justin Timberlake an't play the Super Bowl without a little controversy. A few hours after his Half Time Show in Prince's former hometown of Minneapolis, Minnesota, JT appeared on "The Tonight Show," where he explained to Jimmy Fallon why he showed an image of Prince onstage while he played "I Would Die 4 U," a move some social media users took issue with. "It's a moment for me, if I'm being quite honest, because [Prince has] always been the pinnacle of musicianship for me," JT said, according to Us Weekly. "When we decided that the serendipity and synergy that we would be in Minneapolis and that, you know, he's such a special thing here, aside from what he is all over the world, I just felt like I wanted to do something for this city and something for him that would be the ultimate homage to what I consider the G.O.A.T. [Greatest of All Time] of musicians." He added that Questlove gave him a pre-show approval on the Prince nod. "We got the actual vocal stems from 'I Would Die 4 U,' the actual recordings, and then we got uncut footage from his performance of it in Purple Rain," he continued. "Somehow, some way, by the grace of probably Prince looking down on us, it synced up. It was like this crazy serendipitous moment. I just wanted to use that opportunity to do something special for this city, but most of all, for my favorite musician of all time." Rumors Justin was going to use a hologram of Prince, who once called holograms "the most demonic thing imaginable," turned out to have been unfounded, as Sheila E announced in a tweet prior to the game. "Family, I spoke w/Justin 2nite and he shared heartfelt words of respect for Prince & the Purple fans. I look 4wrd 2 seeing what I'm sure is going 2 be a spectacular halftime show. There is no hologram. 🙏🏽💋," she wrote. Justin also gave a nod to his role in Janet Jackson's 2004 "wardrobe malfunction" during his set when he yelled "stop!" and ended "Rock Your Body" right before the lyric, "I'm gonna have you naked by the end of this song," which he sang in 2004 before exposing Janet's breast.

Could Queen Latifah be headed to "America's Got Talent?" TMZ reports insiders at the show think Mel B is bringing a big load of personal, possibly divorce drama-related "baggage" to the series and are hoping to replace her with Latifah, who's currently under contract with the show "Star." According to the website, the show is holding auditions for judges beginning in five weeks. 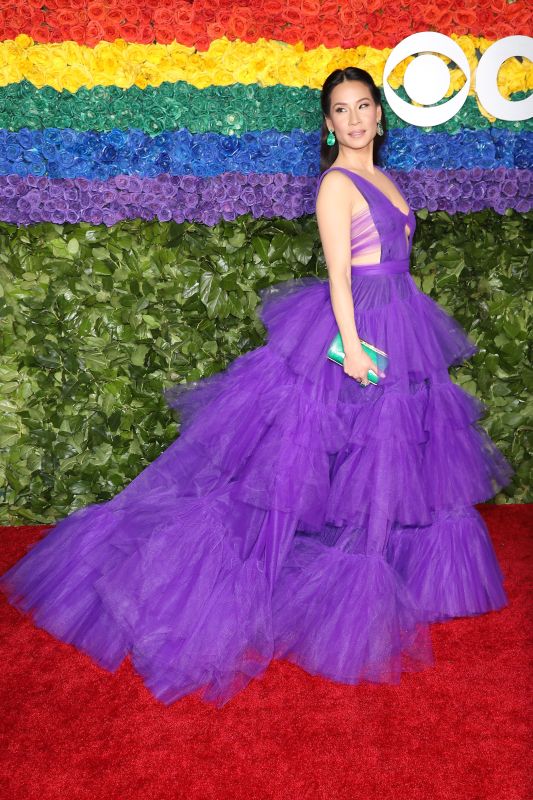