Britney Spears father, Jamie Spears, is no longer the conservator in charge of her personal affairs after asking a judge to allow him to temporarily step down, citing health issues. The pop star's longtime care manager, Jodi Montgomery, was selected as Jamie's replacement, although Brit's dad still controls her finances, according to legal docs filed in Los Angeles on Sept. 9. Just a few days before Jamie's exit, Britney's ex-husband, Kevin Federline, filed a police report accusing Jamie of physically attacking their 13-year-old son. Jamie has since been cleared of child abuse charges.

On Sept. 4, a man was arrested and charged for his alleged involvement in the death of rapper Mac Miller, according to an unsealed federal criminal complaint. Cameron James Pettit, a 28-year-old Hollywood man, was allegedly one of three people who provided counterfeit oxycodone pills containing fentanyl to Mac. Shortly after taking the substance, Mac overdosed at his Los Angeles-area home on Sept. 7, 2018. He was 26.

Fresh off delivering another No. 1 album, Taylor Swift is getting ready to go back on the road! The pop superstar announced on Sept. 17 that she'll be touring in 2020, including a stop for the first-ever performance at Los Angeles's new SoFi Stadium on July 25, 2020. "For me, the Lover album is open fields and sunsets and SUMMER. I want to celebrate the album and perform it live with you in a way that feels authentic to the music," she wrote on Instagram. "I want to go to some places I haven't been, and play festivals for the first time in ages… and where we didn't have festivals, we made some." In addition to two SoFi Stadium dates, Taylor will be performing two East Coast concerts near Boston, plus eight international music festivals including Denmark's Roskilde Festival and Brazil's Allianz Parque. Her newest album, "Lover," debuted at No. 1 on the Billboard Hot 200 chart in August with with 867, 000 units sold its first week.

On Sept. 13, Sam Smith revealed that they have decided to change their preferred pronouns from "he/him" to "they/them." The singer took to Instagram to announce the news. "After a lifetime of being at war with my gender I've decided to embrace myself for who I am, inside and out," the Grammy winner wrote. "I'm so excited and privileged to be surrounded by people that support me in this decision but I've been very nervous about announcing this because I care too much about what people think but f— it! I understand there will be many mistakes and mis gendering but all I ask is you please please try." Earlier this year, Sam revealed that they identify as non-binary and genderqueer.

Eleven new women have come forward to accuse Los Angeles Opera Director Placido Domingo of sexual harassment, AP reported on Sept. 4. The victims claim that the famed opera singer behaved inappropriately with them — allegations include unwanted touching, asking for private gatherings, trying to kiss them on the lips and calling them late at night — over a number of years. The new accusations came just a few weeks after numerous other women accused the music star of sexual misconduct. On Sept. 24, the singer "agreed to withdraw from all future performances at the Met, with immediate effect," Metropolitan Opera General Manager Peter Gelb told staff in an email, as reported by NPR. "We are grateful to him for recognizing that he needed to step down." It's unclear if he'll also step down from his L.A. Opera role.

Rapper Tekashi 6ix9ine accused Cardi B and Jim Jones of being members of the Nine Trey Blood gang while testifying during the week of Sept. 16. The 23-year-old music star, who's facing a 47-year prison sentence for racketeering, weapons and drug crimes, agreed to testify about his involvement with the notorious gang in a bid for leniency. He not only alleged that Cardi and Jim are gangbangers but revealed that he originally joined the Bloods for clout. Cardi denied his allegations in a since-deleted tweet, writing, "You just said it yourself… Brin not 9 Trey. I never been 9 Trey or associated with them." She later posted a meme on her Instagram of the infamous KeKe Palmer Vanity Fair clip in which KeKe states, "I don't know who this man is."

Ric Ocasek (pictured), the frontman of the iconic '70s and '80s rock band The Cars, died on Sept. 15 at his home in New York City at 75. The Office of the Chief Medical Examiner determined his cause of death was heart disease caused by high blood pressure. LaShawn Daniels, a songwriter who created No. 1 hits like Destiny's Child "Say My Name" and Lady Gaga's "Telephone," died in a car crash on Sept. 3. He was 41. Country singer Kylie Rae Harris died at 30 in a three-vehicle crash in northern New Mexico on Sept. 4. Muscle Shoals Rhythm Section guitarist Jimmy Johnson, who recorded with Aretha Franklin, Paul Simon and Lynyrd Skynyrd, died on Sept. 5 at 76. Eddie Money, singer of hits like "Take Me Home Tonight" and "Two Tickets to Paradise," died on Sept. 13 at 70, his family confirmed. Eddie revealed that he'd been diagnosed with stage 4 esophageal cancer less than a month before his death. Daniel Johnston, a prominent singer and songwriter based in Austin who was the subject of the 2005 documentary "The Devil & Daniel Johnston," died on Sept. 11 from a heart attack. He was 58.

On Sept. 4, A$AP Rocky's legal team announced that the rapper will not file an appeal after he was convicted of assault in Sweden in August. "Given the headache and the stress this process has meant he has decided he doesn't have the strength to do this one more time," A$AP's lawyer, Slobodan Jovicic, told TT news agency. The jury found that the rapper and two other men physically assaulted a 19-year-old man after a heated exchange in Sweden. A$AP received a suspended sentence but has maintained his innocence, arguing that he was only defending himself.

Paul McCartney and Ringo Starr are honoring their late bandmate's legacy. On Sept. 16, the Beatles musicians revealed that they have recorded a version of John Lennon's song "Grow Old with Me" for Ringo's upcoming album, "What's My Name," which will be released on Oct. 25. The original track was released on John's 1984 posthumous album, "Milk and Honey." Ringo plays drums and sings on the new version, while Paul provides bass and backing vocals. Just a few weeks before the duo's big announcement, fans found out that The Beatles wanted to make more albums after "Abbey Road." Band members can be heard discussing their future on a newly revealed audio recording that was given to The Guardian by rock historian Mark Lewisohn. In the audio, which was recorded on John's tape recorder on Sept. 8, 1969, John can be heard suggesting that he, Paul and George Harrison record four songs each, with two more to come from Ringo "if he wants them."

A woman who accused Trey Songz of domestic violence dropped her lawsuit against the singer on Sept. 11. The accuser, who claimed that Trey assaulted and falsely imprisoned her during the 2018 NBA All-Star Weekend in Los Angeles, filed a request for dismissal with prejudice.

Dionne Warwick and the IRS have settled their legal differences. The R&B singer and the government agency both dropped competing lawsuits against each other, according to legal files published by The Blast on Sept. 6. The IRS claimed that Dionne owed the government $7 million in unpaid debt from 1990 to 2008, while Dionne argued that the IRS should stop seizing her assets because the amount had already been addressed in her 2013 bankruptcy case.

Michael Jackson's estate slammed HBO's "Finding Neverland" on Sept. 16 after the controversial documentary, which focuses on sexual abuse allegations against the late singer, won an Emmy for outstanding documentary or nonfiction special at the Creative Arts Emmys. "For a film that is a complete fiction to be honored in a nonfiction Emmy category is a complete farce," the Jackson estate said in a statement to "Entertainment Tonight." "Not one shred of proof supports this completely one-sided, so-called documentary, which was made in secrecy and for which not one person outside of the two subjects and their families were interviewed."

Destiny's Child might have made waves with their hit "Charlie's Angels" single, "Independent Woman Pt. 1," but Ariana Grande, Miley Cyrus and Lana Del Rey are coming for their crown! The three pop superstars recorded a new song, "Don't Call Me Angel," for the rebooted "Charlie's Angels" movie soundtrack and released a music video for it on Sept. 12. Director Elizabeth Banks, who makes a cameo in the video, told People magazine that the ladies "were inspired by 'Independent Women' and Destiny's Child with the last set of movies." Miley, Ariana and Lana bring not only their vocal talents to the video but also some stage combat moves and killer black leather ensembles.

A tour bus carrying Josh Turner's road crew crashed in Shandon, California, on Sept. 19, leaving one person dead and seven others injured, according to the San Luis Obispo County Fire Department. Police and paramedics were called to the scene just before midnight after the crew wrapped up Josh's performance in Paso Robles, California, about 20 minutes away. The country singer canceled his scheduled performance at the Central Washington State Fair on Sept. 20 following the incident. "Josh Turner and his road family have suffered a devastating loss," the singer's rep told People magazine. "Please keep the crew, band and Josh in your thoughts and prayers."

Whitney Houston's talent is officially returning to the stage nearly eight years after her death. On Sept. 13, the singer's estate released 2020 dates for an upcoming hologram-based production, "An Evening With Whitney: The Whitney Houston Hologram Tour." The tour kick offs in Mexico on Jan. 23 then heads to Europe. The North American leg of the tour begins in the fall.

Dave Hogan for One Love Manchest 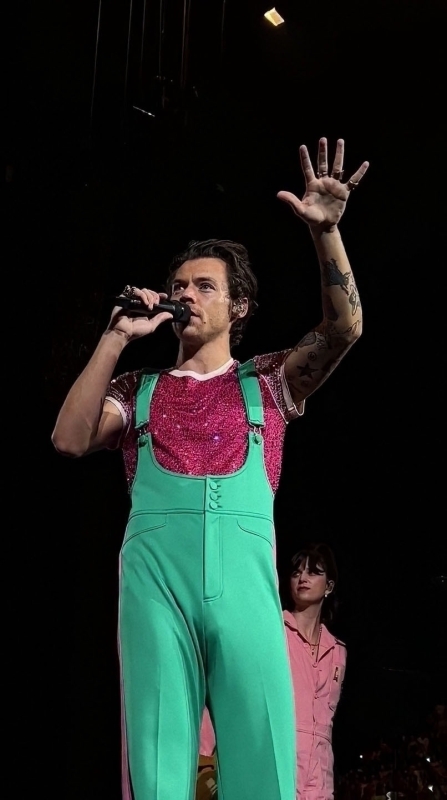