Brad Pitt is coming to HGTV

Brad Pitt is teaming up with the Property Brothers? Here's something to look forward to! On March 10, HGTV announced that Brad Pitt will appear on an upcoming episode of Jonathan Scott and Drew Scott's new series, "Celebrity IOU." The show debuts on April 13 and centers around Hollywood stars showing gratitude for important people in their lives by surprising them with home renovation projects. Other stars we'll be seeing participate? Melissa McCarthy, Michael Bublé, Rebel Wilson and Viola Davis!

RELATED: Stars who had their own reality shows

Clare Crawley cast as the next "The Bachelorette"

We now know who the new "The Bachelorette" star will be… and it's a total surprise! It was announced on the March 2 episode of ABC's "Good Morning America," that former runner-up Clare Crawley will headline the upcoming 16th season. You know the 38-year-old hairstylist — who will be the oldest Bachelorette in the show's history — from Juan Pablo Galavis's infamous season 18 of "The Bachelor" back in 2014. She also appeared on the first two seasons of "Bachelor in Paradise," and on 2018's "The Bachelor Winter Games." Though shooting her season has been postponed due to the coronavirus outbreak, Clare encouraged her fans to apply to appear on her season of "The Bachelorette" this month, as its likely the lineup of her suitors might change once shooting resumes. "I'm not saying this personally, but I feel like since we have a break in the show right now, I don't think it's too late to submit people," Clare said. "So submit them, why not? What's the worst that could happen?"

Late Night hosts get creative during the quarantine

Late night hosts got creative while self-quarantining this month to stop the spread of coronavirus! Jimmy Fallon, Jimmy Kimmel, Stephen Colbert and Trevor Noah all started releasing low-budget digital versions of their shows made from the comfort of their homes. On March 16, Stephen Colbert gave his monologue from his bathtub… while also wearing a suit, and the following day he read it while sitting at his outdoor fire pit. On March 17 Jimmy Fallon had wife Nancy Juvonen film him in the playroom at his house as he read a monologue from his "Tonight Show" and sang about St. Patrick's Day. Jimmy Kimmel also provided some in-home entertainment on March 17 with a video shot in his home office. For his part, Trevor Noah has been putting up sketches on the "Daily Show" YouTube page, showing off his cleaning skills as he spends time at home. Conan O'Brien also got in on the fun, sharing hand-washing tips and toilet paper hacks.

"The Bachelor" comes to a very dramatic ending

Peter Weber's rocky season 24 of "The Bachelor" came to an end on March 10. And though we saw the pilot propose to contestant Hannah Ann Sluss, he eventually changed his mind and the two parted ways a few months later (while cameras rolled, of course!). This led to Chris Harrison getting involved and alerting former contestant Madison Prewett, who'd previously walked away from the show after being one of the final two girls, and the former couple reuniting (once again, in front of cameras) and deciding to give their relationship another try. The two announced they were dating again on the live finale, but that strangely wasn't the most shocking part of the last episode…

Peter Weber's mom gets in on "The Bachelor" finale drama

An unlikely feud brewed on "The Bachelor" finale when it ended on March 10. After Peter Weber shocked audiences by dumping Hannah Ann Sluss and reuniting with Madison Prewett, there was one person in his life who was very unhappy with the decision — his mom Barbara. During the live portion of the finale, Barbara didn't shy away from sharing her real feelings about Madison, noting "All his friends, all his family, everyone that knows him, knows that it's not going to work." It turned out that she was right — the two were broken up just a few days after the finale aired.

The "Today" show has hosts working from home

The "Today" show had some changes in light of coronavirus this month. On March 17, Al Roker delivered the daily weather report live from his kitchen via an iPad, and he's been co-anchoring the show from home ever since. (He and co-anchor Craig Melvin have been staying away from the morning show's New York City studios since a producer for the third hour of the "Today" show tested positive for coronavirus on March 15.) For her part, Savannah Guthrie revealed on March 17 that after developing "a mild sore throat and runny nose," she decided to start co-anchoring the "Today" show from home "in an abundance of caution." But like her co-anchors, she's still been reporting on the show live from her basement.

Rob Gronkowski signed with the WWE! On March 11, The Wrap reported that the football player made his debut on March 20 to an empty arena. Back in 2017, the former New England Patriots tight end popped up on WrestleMania 33 as reinforcement for another former NFL star, his real-life pal Mojo Rawley.

Variety reported on March 9 that "Jeopardy!" and "Wheel of Fortune" will not tape in front of live studio audiences for the foreseeable future. The change was made due to the spread of coronavirus, which poses a threat to contestants, to guests and especially to "Jeopardy!" host Alex Trebek, who's immunocompromised due to his battle with stage 4 pancreatic cancer. Variety's source cited Trebek's greater risk of contracting the virus, the fact that the shows' audiences tend to skew older, and the fact that many contestants and audience members travel from out of town to attend the tapings as the reasons behind the decisions, and later both shows opted to suspend production completely at the time being.

"Judge Judy" is coming to an end

It's time to say goodbye to "Judge Judy." Host Judy Sheindlin made the sad announcement on the March 2 episode of "The Ellen DeGeneres Show," sharing that her long-running syndicated courtroom series, "Judge Judy," which is distributed by CBS, will end after its upcoming 25th season finishes airing next year. TMZ alleged that it was her ongoing feud with CBS that led to her ending her popular courtroom show. Though she'd previously been happy at the network, once Les Moonves left in 2018 the outlet reported that Judy and the new team hadn't "been seeing eye-to-eye on a lot of things she and Les were square on. But there's some good news for Judy's fans — despite parting ways with CBS, she's not leaving the small screen for good. The Judge is launching a new show, "Judy Justice" with another network.

The Elisabeth Hasselbeck and Rosie O'Donnell feud is still going

Some feuds never die! Rosie O'Donnell threw some shade Elisabeth Hasselbeck's way after the conservative talking head returned to "The View" on March 11. Rosie took to Twitter to share her feelings, writing, "oh dear god – not again – enough with her" as a response to a headline reading, "Elisabeth Hasselbeck returns to The View and sparks clash by praising Trump's coronavirus response." The two women co-hosted "The View" during the show's 10th season in 2006 and 2007. They've infamously feuded off and on since May 2017, when they got into a major on-air altercation over the Iraq War.

In other "The View" news, on March 22, co-host Meghan McCain announced she's expecting her first child with her husband Ben Domenech. In light of her exciting news, she also announced via a tweet that she's be working from home, writing, "I consulted with my doctors and they advised me that for the safety of our baby and myself, I should be extra vigilant about limiting the amount of people we come in contact with. Starting immediately, I'll be joining the millions of Americans who are self-isolating as a precaution to prevent the spread of COVID-19. As a result, I will be appearing on 'The View' from home via satellite." The show is currently still taping without an audience.

In light of social distancing, on March 18 The Hollywood Reporter shared that we'll have to wait a little longer to get the "Friends" reunion special. HBO Max reportedly postponed shooting the special due to the coronavirus pandemic. The unscripted retrospective show was scheduled to film later this month, but was suspended in light of the virus.

Tragic accident on the "Batwoman" set

The set of "Batwoman" had a tragic accident on March 11. Comedian Amanda Smith was paralyzed from the waist down after the bucket of a boom lift was lowered onto her head while she was working as a production assistant on the Vancouver set. She underwent emergency spinal surgery following the accident but will need significant physical therapy before it's clear whether or not she'll be able to regain sensation in the lower half of her body. Her co-worker Tyler Mazzucco — who launched a GoFundMe account to assist with her rehabilitation expenses — told The Toronto Sun that Amanda "was literally just sitting there" when the lift "came down on top of her." She reportedly had her back to the machinery and couldn't hear it over the noise of nearby traffic. The Hollywood Reporter reported that the Canadian labor agency WorkSafeBC is conducting an investigation into the accident.

Emilia Clarke opens up about that "Game of Thrones" ending

Emilia Clarke is sounding off about how her "Game of Thrones" character Daenerys Targaryen ended things on the wildly popular HBO show. She talked to The Sunday Times on March 14 that she wasn't exactly thrilled with how things ended for Daenerys. "I really felt for her," she said. "And yeah, was I annoyed that Jon Snow didn't have to deal with something? He got away with murder — literally." She also opened up about her initial reaction after finding out, explaining: "I knew how I felt when I first read it, and I tried, at every turn, not to consider too much what other people might say, but I did always consider what the fans might think — because we did it for them, and they were the ones who made us successful, so … it's just polite, isn't it?"

After over 20 years with the network, The Hollywood Reporter reported that Chris Matthews would be leaving MSNBC. Though it seemed shocking, the outlet's insiders reportedly "knew this day was coming" for months after some recent controversies. And the writing might have been on the wall after he was excluded from MSNBC's Feb. 29 South Carolina Democratic primary coverage. Though the network has yet to name a successor, candidates are thought to include NBC News and MSNBC's Steve Kornacki, Joy Reid, Nicole Wallace and former Fox News host Shepard Smith. For his part, Chris noted he would be working on a book after his departure. 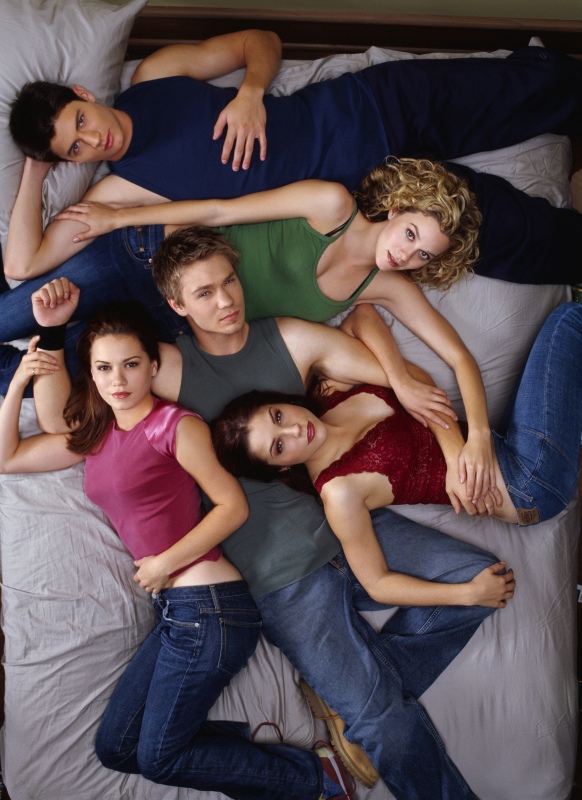