Wonderwall.com is taking a look at the biggest reality TV moments of 2021 so far and kicking it off with this farewell… It's the end of a reality TV era! Season 20 of E!'s "Keeping Up with the Kardashians" was the family's last on E! — it aired its final episode on June 10. Kim Kardashian made the official announcement that things were ending in September 2020 and the emotional season debuted in March. Though the reality series that made the Kardashian-Jenner clan household names is over, a two-part "Real Housewives"-style reunion special hosted by Bravo's Andy Cohen will wrap things up when it airs on E! on June 17 and June 20. The famous family isn't leaving TV forever, however: They've inked a multi-year deal with Disney to produce "new global content" for streaming platform Hulu.

RELATED: The Kardashian-Jenner family's changing looks over the years

We love when reality TV stars cross paths with A-listers! In perhaps one of the bigger surprises in 2021 entertainment news, a Bravo star was at the center of a very high-profile celebrity relationship and cheating scandal. "Southern Charm" star Madison LeCroy (right) made waves at the show's reunion that aired in January when a co-star claimed she was hooking up with a "married ex-MLB player" who was later identified as Alex Rodriguez, who was engaged, not married to Jennifer Lopez at the time. Madison denied having any kind of physical relationship with A-Rod, but the retired baseball star and J.Lo called off their romance in April in the wake of the scandal.

Matt James's "The Bachelor" season 25 was rocked by scandal in the spring when controversial photos of then-frontrunner Rachael Kirkconnell surfaced as the previously taped show was airing. Images showed her dressed as a Native American woman and attending an Antebellum-themed college party. She also drew heat for previously liking posts that included the Confederate flag. Rachael apologized, saying in part, "I was ignorant, but my ignorance was racist." Rachael ultimately won Matt's final rose, but by the time the couple made their first public appearance on the "After the Final Rose" special, they announced they'd split — to host Emmanuel Acho. (They later reconciled.) Longtime franchise host Chris Harrison wasn't there because he got involved in this scandal as well. Keep reading to learn about his part in this "The Bachelor" controversy…

As the Rachael Kirkconnell scandal unfolded, Chris Harrison got involved. The host of "The Bachelor" defended Rachael to former "The Bachelorette" star Rachel Lindsay in an interview, asking people to have "a little grace" and "compassion" for the young contestant. That interview was met with a lot of backlash. Chris eventually issued an apology, noting he spoke "in a manner that perpetuates racism," and announced he was stepping back from the franchise and would not be hosting either the "After the Final Rose" special for Matt's season or the next season of "The Bachelorette." In June, he confirmed he was leaving for good. "I'm excited to start a new chapter," he wrote, in part, on Instagram. Page Six reported that Chris demanded a $25 million buyout. It's unclear how much he got but according to Deadline, which was the first to break the news of Chris's permanent departure, the terms of his exit included "a mid-range eight-figure payoff and promise to keep his mouth shut."

Though it hadn't even aired yet, season 2 of "The Real Housewives of Salt Lake City" made headlines in early 2021. Cameras were reportedly rolling in March when one of the women was arrested — and fans can watch it all go down later this year when the show returns to Bravo. Jen Shah, who was questioned about her job and finances on the season 1 reunion earlier in the year, was arrested on conspiracy to commit wire fraud and conspiracy to commit money laundering charges — her assistant was arrested too — related to an alleged telemarketing scheme that targeted the elderly. She's now facing 30 years in prison if convicted. Despite the legal drama, Jen has continued to be active on social media and film with the other ladies since pleading not guilty.

Continuing to be a reality competition smash hit in 2021? "The Masked Singer," which kicked off season 5 in March with a cast full of obscured famous faces whose identities were quite surprising once revealed. Few were surprised when 98 Degrees singer Nick Lachey — the Piglet — was revealed as the winner, but there were a few shocking reveals, including during week 2 when the show unmasked its first trans contestant — the Phoenix, aka Caitlyn Jenner.

Here's a first in "Below Deck" history — a baby! The second season of "Below Deck Sailing Yacht" featured a typically incestuous crew — with stews and deckhands pairing off early on and plenty of boat-mance blossoming — but one of those relationships reportedly yielded a pregnancy! Rumors emerged on the Bravo blogs claiming that Dani Soares, second stew on the yacht, was pregnant, and that the baby's father might be deckhand Jean-Luc Cerza-Lanaux. None of the yachties have confirmed or denied the whispers, so we'll have to wait until the reunion to find out for sure!

Bachelor Nation was rocked by some big news in April. Former "The Bachelor" season 23 lead Colton Underwood, who was often called the virgin bachelor during his run on the show, publicly came out as a gay man. He also announced that he was filming a Netflix docuseries about his coming out journey that's expected to hit the streaming service later this year.

Season 5 of "Summer House" looked a little differently thanks to the coronavirus pandemic. Instead of fleeing New York City to relax and party at a Hamptons summer house on the weekends, cast members buckled in and remained in the home for the entirety of filming, turning things into the equivalent of "The Real World" — Bravo style. The result? A lot more drama than we typically see — most of which centered around one cast member, Hannah Berner (second from left). Though Hannah was a fan favorite when she debuted on the series on 2019's season 3, she had a swift and shocking fall from grace in 2021. From accusing former romantic interest Luke Gulbranson (fourth from left) of leading her on then bringing his former flame to the house to volatile (and downright confusing) fights with housemate Kyle Cooke (fourth from right) to battling one of her former best friends, Amanda Batula (third from right), Hannah's summer in the house was… bumpy to say the least. And the reunion episodes didn't treat her much better, as the podcaster and comedian sat firmly in the hot seat. Even co-stars Lindsay Hubbard (center) and Carl Radke (right), who didn't go head to head with her in the house, seemed to bring up their unresolved beef. By the end, it seemed there were actually only two people on the robust nine-person cast that didn't have an issue with Hannah — her bestie and podcast co-host Paige DeSorbo (left) and Luke's former fling Ciara Miller (third from left).

This season of "American Idol" had a surprising political tie-in! When the 2021 season kicked off, former White House counselor Kellyanne Conway's daughter, Claudia Conway, competed and even made it through to Hollywood Week. Unfortunately, during the duets portion of the competition, the 16-year-old was sent home.

Season 5 of "The Real Housewives of Dallas" didn't stir up too much drama… until it was time for the finale. Despite getting the all-clear to do an in-person reunion with Andy Cohen in New York City, cast member Kary Brittingham shockingly tested positive for COVID-19 after arriving in New York. That resulted in Kary and cast member Brandi Redmond, who sat next to her on the plane, having to quarantine in their hotels and film the reunion virtually while their other co-stars were in person with Andy. But that wouldn't be the only reason both ladies stood out during the reunion taping. Both of them also had some serious marriage drama that surfaced during the reunion special — Brandi was put in the hot seat over videos showing her husband kissing another woman, while Kary announced that she and her husband were divorcing.

Netflix's "The Circle" served up a second season in April 2021… one that kept viewers on their toes. Under the alias of "Trevor" — her husband's name! — DeLeesa St. Agathe (right) came out on top as a catfish, beating out a reality star from another Netflix series, "Too Hot to Handle" — Chloe Veitch (left) — and someone even posed as pop star Lance Bass. All the while, DeLeesa was harboring a pretty giant secret — she was pregnant! Yep, the YouTuber discovered she was expected toward the end of her quarantine period before starting the show and decided to keep that information secret (even from husband Trevor after producers offered her the chance to tell him).

Netflix offered up an addicting reality offering early in the year — "Bling Empire." The series offered a glimpse into the lives of a group of insanely wealthy East Asian and East Asian American friends in Los Angeles by showing off their opulent lifestyles — including the over-the-top children's birthday party thrown by Christine Chiu seen here — and digging into their fascinating drama (including Kelly Mi Li's tumultuous relationship with a former "Power Rangers" star).

Season 13 of "The Real Housewives of Atlanta" kicked off in December 2020, but it wasn't until 2021 that the show really heated up. There were more serious topics like Porsha Williams' work as an activist and arrests while protesting the murder of Breonna Taylor, and the messy separation of Kenya Moore and Marc Daly, but the show also managed to infuse more light-hearted moments as the season went on. Most notably? That seriously scandalous bachelorette party Kandi Burruss threw for Cynthia Bailey that involved a stripper named Bolo and an attempt to obscure the cameras that didn't entirely work. On top of all that, in April, it emerged that Porsha got engaged to new "RHOA" personality Falynn Guobadia's estranged husband, Simon, after a month of dating, sparking fresh drama followed by Falynn and Simon exchanging cheating accusations.

Paramount+ offered veteran reality TV lovers a treat in March — "The Real World Homecoming: New York." This revival series brought back the original seven strangers and put them right back into their loft in New York City nearly 30 years later. The result? The cast members — except Eric Nies, who tested positive for COVID-19 and had to participate virtually — reflected on their time together back in 1992 and how the world had changed since that point. 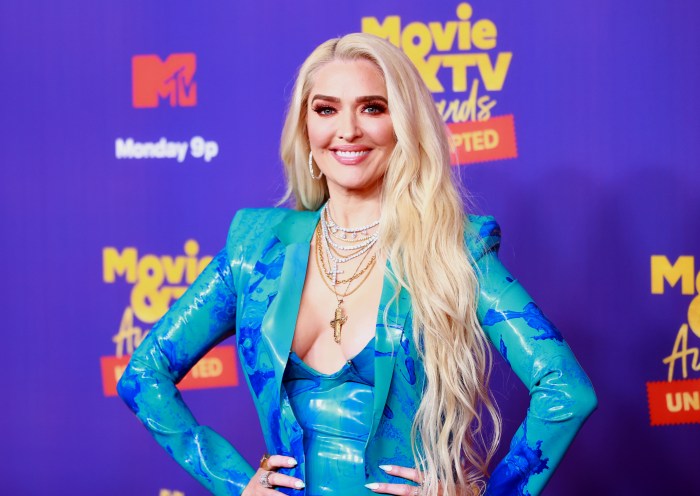 Up Next 'Housewives' scandals