The '60s is a fascinating decade, and Hollywood has done a great job bringing the era back to life — on both the big and small screens. Wonderwall.com is rounding up our favorite shows set in the1960s, starting with the greatest one of all — "Mad Men"! This addictive, wildly popular drama celebrated the decade when it debuted in 2007. Set at the fictional Manhattan advertising agency Sterling Cooper, the successful show chronicled the day-to-day life of the company's creative director — suave, handsome and troubled Don Draper (played by Jon Hamm). In the process, we also got a glimpse back in time at the cultural and social norms of the era. The series earned 16 Emmy Awards and five Golden Globes during its seven-season run. Keep reading for more…

2002 brought us "Catch Me If You Can," a movie based on the life of scammer Frank Abagnale in the '60s. Leonardo DiCaprio starred in this surprisingly delightful crime film, in which audiences see how Frank used check fraud and his savvy skills to con people out of millions while posing as a Pan Am pilot, a doctor and a parish prosecutor, among other things.

In 2011, "The Help"– a film that chronicled the lives of two black maids in Mississippi in the midst of the Civil Rights Movement of 1963 — was an award season darling. Viola Davis and Octavia Spencer starred alongside Emma Stone, who played an aspiring writer who was penning a book from the ladies' point of view that showed the racism they faced on a daily basis while working for white families. The film was a massive hit at the box office too and earned Octavia a best supporting actress Academy Award.

Though it only ran for two seasons from 2015 until 2016, David Duchovny's NBC show "Aquarius" gave us a unique glimpse back into the decade in 1967 Los Angeles. Loosely based on real events, it dove into the world of Charles Manson, with David playing Sam Hodiak, a fictional LAPD detective investigating a case involving a missing teenager.

Hollywood recreated one of the biggest tragedies of the '60s in 1991 with Oliver Stone's "JFK." The film was controversial at the time, as it insinuated that John F. Kennedy's vice president, Lyndon B. Johnson, was involved in the assassination. Despite its scandalous implications, the film — in which Kevin Costner starred as a district attorney looking into the alleged cover-up of the president's death — earned eight Academy Award nominations.

One of the creepiest recreations of the '60s took place on 2012's "American Horror Story: Asylum." The second season of Ryan Murphy's "AHS" series on FX took place in a fictional mental institution called Briarcliff Manor in 1964 and showed the horrors of the insane asylum through the eyes of Kit Walker (Evan Peters), who was committed there and accused of being a serial killer. While he's locked up, a journalist played by Sarah Paulson arrives to investigate the horrible mistreatment inmates endure, which turns the creepy location into a true horror story.

Another film that took on pop culture in the '60s? "That Thing You Do!," which chronicled the rise of a fictional band called "The Wonders." The film showed off the glitzy side of the entertainment industry during the era, complete with a killer soundtrack that was a massive success in its own right. Tom Hanks wrote, starred and directed this 1996 music-driven comedy, which earned great reviews.

Remember "American Dreams?" The early '00s show chronicled the lives of the Pryor family in the mid-'60s and centered around daughter Meg Pryor (played by Brittany Snow), a dancer on Dick Clark's "American Bandstand." One of our favorite parts of the drama series? It honored the most iconic '60s music by having present-day stars step in and perform as the legends — like Kelly Clarkson as Brenda Lee, Usher as Marvin Gaye and Jennifer Love Hewitt as Nancy Sinatra.

"Thirteen Days" took us back to the '60s during a particularly tense time — the Cuban Missile Crisis of 1962. Kevin Costner starred as a White House assistant during President John F. Kennedy's tenure, with Bruce Greenwood playing the commander in chief and Steven Culp as Robert F. Kennedy in the 2000 film. Though critics enjoyed the drama's deep dive into this period of the '60s, audiences weren't as enthused: The film failed to make back its $80 million budget.

If you'd like to time travel back to the '60s via a beautifully shot romance, "An Education" is the film for you. The 2009 drama stars Carey Mulligan as a 16-year-old student, Jenny, who falls victim to the charms of Peter Sarsgaard's older con-man character, David. Despite the doomed romance, watching the couple in various locales across Europe during the swinging '60s is a treat. The flick earned three Academy Award nominations.

Another take on the '60s and the tragedy of John F. Kennedy's murder? Hulu's "11.22.63," which starred James Franco as a time-traveling teacher who goes back to try to prevent JFK's assassination. We loved the unique take on the event that Hollywood has chronicled dozens of times, and the way this miniseries somehow made the supernatural feel real as James's character went from the present day back to the '60s.

Who better symbolizes pop culture in the '60s than The Beatles?! The 1964 film "A Hard Day's Night" was the mega-successful band's first movie, a comedy chronicling 36 hours in the musicians' lives. The men all played themselves in the flick, though actors played characters like Paul McCartney's grandpa, John McCartney. Unsurprisingly, the movie was a smash hit and was even rated one of Time magazine's 100 all-time greatest films.

The 1960s-set "Riding in Cars With Boys" gave a different perspective on the era as it followed the life of Bev, a teen mom married at 15. Based on the autobiography of the same name from Beverly Donofrio, the flick chronicles the struggles of being a teenage mother while also showing how Bev persevered and eventually got her master's degree.

Though it began in 1956, "Masters of Sex" ends up chronicling the entirety of the '60s as it delved into the world of human sexuality researchers in St. Louis, Missouri. The Showtime project, which was loosely based on a biography of the same name, starred Michael Sheen and Lizzy Caplan and ran for four seasons. It earned a Golden Globe nod for best drama series.

The musical "Hairspray" has graced the stage and the big and small screens, but 2007's version of the story featured the most starpower. The romantic comedy set in the '60s confronts some serious issues like segregation and race tensions, all while following the life of Tracy Turnblad (played by Nikki Blonsky), a high school student with big dreams of dancing on "The Corny Collins Show." John Travolta, Michelle Pfeiffer, Christopher Walken, James Marsden, Queen Latifah and Zac Efron are just a few of the big names who had roles in the latest movie version. 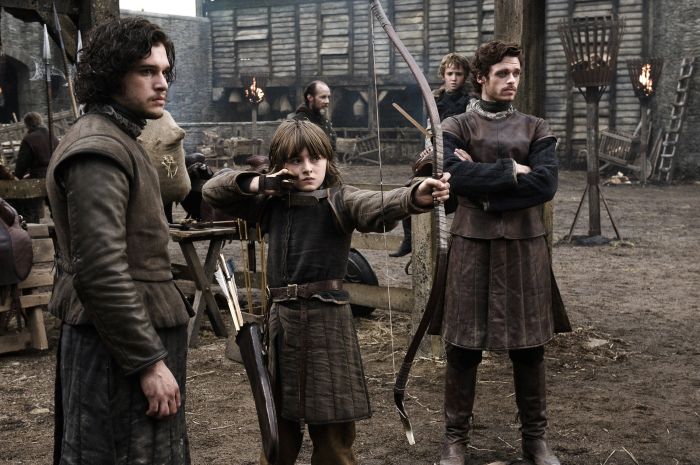 Up Next 10 years later