Following an appearance on NBC's "Today Show" on Monday, Sept. 25, Debra Messing was very vocal about not agreeing with some of co-host Megyn Kelly's choice of words. And apparently, network execs told her to cool her jets. The controversy started when the former FOX newscaster asked an audience member if he had modeled some his life choices after his favorite "Will & Grace" character, Will, played by Eric McCormak. "Is it true that you became a lawyer, and you became gay, because of Will," she questioned the fan. Debra was clearly pretty horrified by the comments. "Regret going on," she wrote to her Instagram followers after the show. "Dismayed by her comments." According to the New York Post, NBC was quick to scold the actress, whose show is on the same network. "Debra was told to cut it out by someone high up in the NBC Entertainment division run by Bob Greenblatt, via her agent or publicist," an insider revealed. While her rep hasn't commented on the matter, another source claims that there's no beef between her and NBC. Plus, Debra even retweeted a photo from co-star Sean Hayes of the whole "Will & Grace" cast smiling together during the segment with Megyn. In any case, we're just excited that the whole gang is back on TV for the premiere of "Will & Grace" tonight!

RELATED: What's the cast of 'Will & Grace' been up to?

Simon Cowell's back at it again with that sassy, underhanded attitude we know and love! Ahead of Katy Perry's upcoming judging gig on Simon's old show, "American Idol," he had some dig-worthy words for all music artists who decide to judge other singers. "I don't get it," he revealed to Harvey Levin, in a preview clip for his "OBJECTified" interview released on Sept. 28. "You think Madonna wants to find Madonna? You think she wakes up tomorrow morning going, 'God I'm really hoping the next Madonna comes along and I need to do something about it.' She's going, 'no, I want Madonna to be more successful,' and I totally get that. So, when I see them judging these shows it's like … whoa." When asked directly how he feels about Katy taking a reported $25 million panel seat on the ABC revival show, the current "America's Got Talent" judge said — with a sarcastic giggle — "Good luck!" It sounds like Simon thinks that talent-searching should be left to the professionals.

RELATED: The best and worst dressed stars of the month

On Tuesday, Sept. 26, news broke that Khloe Kardashian is expecting her first child with basketballer boyfriend Tristan Thompson, but that doesn't mean she'll be in any rush to head down the aisle. "Khloe hasn't typically cared about getting married before having a baby," an insider revealed exclusively to Us Weekly. "She's open to it but it's not a prerequisite, to be married, before having kids." She may not be picking out a wedding dress just yet, but the mag also claims that she and her Cleveland Cavaliers baby daddy have at least been discussing their plans for the future. "They have long term plans they are talking about together," the source added. Regardless, it's bound to be a busy year for the Kardashian family with youngest sister, Kylie Jenner, also expecting her first child with rapper Travis Scott, and Kim Kardashian expecting her third via surrogate.

RELATED: Stars who chose their hearts over their homelands

Meghan Markle's half-sister has recently come out of the woodwork and has nothing but kind things to say about her sibling's royal boyfriend, Prince Harry. Samantha Grant, who shares the same biracial father as Meghan, is planning to release a book — "The Diary of Princess Pushy's Sister" — praising the British royal family for their multicultural evolution. In 2016, the Prince came to Meghan's defense with a statement calling out the media for subjecting her to a racial "wave of abuse and harassment." Samantha, who admits to having been estranged from her sister for a decade, wants to acknowledge the family's support in her upcoming work. "I am proud and impressed how they have handled this [relationship]," she told the New York Post on Sept. 27. "I was very proud of Prince Harry's chivalry and stance in defense of my sister and his love for her. The world witnessed some honorable actions on his regard." In the meantime, the lovebirds' romance has been heating way up. Prince Harry reportedly went to visit Meghan on the set of her series, "Suits," last week, and this week, they were photographed holding hands in public at the Invictus Games in Canada.

It's been almost a year since Kim Kardashian was robbed at gunpoint in her Paris Hotel room on Oct. 2, 2016, and more than a handful of people involved in the crime were arrested in the New Year. But now, ahead of the robbery crew's big trial, a man claiming to have masterminded the whole ordeal has sent a letter of apology to the "Keeping Up with the Kardashians" star's legal team in France. "I want to come to you as a human being to tell you how much I regret my gesture, how much I have been moved and touched to see you in tears," Aomar Ait Khedache wrote. But, sources at TMZ say that Kim's not buying the pity-party remorse act, especially since the letter was first sent directly to the judge presiding over the upcoming trial. Still, Aomar goes on about sympathizing with her pain and hoping that this will help her to move on from the trauma he caused. Kim was sure that the robbers were going to shoot her in the back when they had her tied up with duct tape over her mouth, whilst heisting around $10 million worth of jewelry from her. We don't think a letter is going to fix that kind of emotional distress anytime soon.

Tom Cruise slams rumors that his butt was fake in 'Valkyrie'

Back in August, the Twitterverse went viral with an image of Tom Cruise's voluptuous backside in the 2008 flick "Valkyrie. Fans said that his butt definitely looked fake, but Tom recently cleared up the booty chatter. "There was no prosthetic in 'Valkyrie,'" he revealed in a Sept. 26 interview with Screen Rant. And, just to be super clear, Tom also confirmed that his backside is also au natural in "American Made," his latest flick. "It's me. It's not CGI, it's me," he said. "I do my own mooning in films. So, let it be known, I do my own mooning." Well, if we didn't have plans to see Tom's new movie before, we sure do now.

Leave it Bethenny Frankel to always keep it real with her fans! "The Real Housewives of New York City" star took to Instagram on Wednesday, Sept. 27, to share a close-up selfie of her facial scar post-surgery for skin cancer. "You should see what the other guy looks like," she wrote alongside a photo of her 12-stitches cheek incision. But jokes aside, it's wonderful that Bethenny was able to remove her basal cell carcinoma in it's earlier stages and that she's using her platform to bring awareness to skin cancer. "I am extremely lucky to have caught it in time," she told People mag in September. "And it just goes to show you have to know your body and be very aware of any changes." Wishing you a speedy recovery, Bethenny.

It's been just about three months since Beyonce gave birth to twins, Rumi and Sir, and we're totally thrilled to see her back in action on Instagram. On Sept. 27, the 36-year-old superstar shared a bevy of pics of herself on social media that look like they're from backstage at the Bruno Mars concert in New York City earlier this week. In one video montage, Bruno's song "Chunky" is playing in the background while photos of Bey wearing big gold hoop earrings that read "chunky" flash by. There's also shots of her bling rings that have the initials of her three kiddos on them and pics with her hubby JAY-Z seemingly roaming the halls backstage.

What will happen to Kylie Jenner's lips during pregnancy?

Kylie Jenner, 20, has admitted to having fillers done on her lips to achieve her much more voluptuous look, but she may not be able to keep up with her injections during her recently revealed pregnancy. "I would never knowingly administer lip injections to a pregnant patient," Dr. Simon Ourian, who many of the Kardashian family members, including Kylie, frequently visit, told the New York Post on Sept. 27. "In fact, it is my policy not to perform any procedures at all on pregnant women." So, what is a girl to do? Well, the LA-based doc says that there's a good chance the fillers will last for a few months and that many women's lips increase in size naturally during pregnancy anyways because of hormones and swelling. But, one thing's for sure … Kylie won't be going to him if she needs a fill.

Rapper turned actor Ice-T has a long-running role on NBC's "Law & Order: Special Victims Unit" as Detective Fin Tutuola, and he's even been able include some of his family on the series. In the past, he's had his wife Coco Austin guest star on the show three times, but what about his 21-month-old baby girl, Chanel Nicole? "Chanel would love to be on the show," the actor told Us Weekly during a Sept. 20 set visit, though he also expressed some concern over the show's explicit content. "But you know, we'll see. I don't want her to be no raped kid or nothing!" Despite his qualms, we would so be all about his adorable daughter on the air if they could find her a more appropriate role. 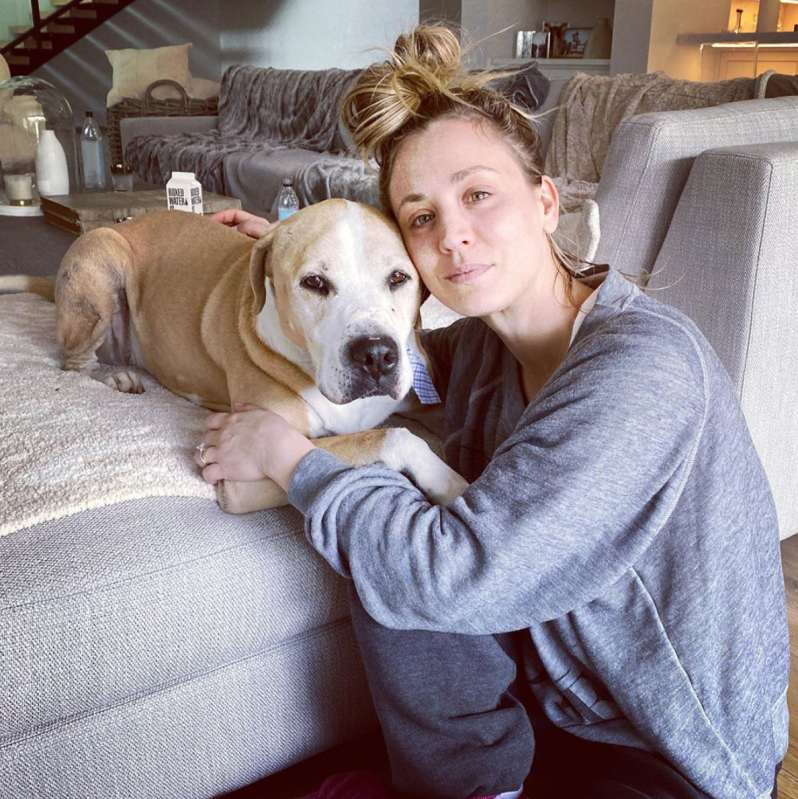 Up Next Puppy Love