Gwyneth Paltrow would only act again under this condition

Gwyneth Paltrow has let acting take a back seat in her life the past few years, but doesn't rule out a return to the screen. In a new interview with Naomi Campbell, on her YouTube show, "No Filter with Naomi," Paltrow explained it would have to involve her husband, Brad Falchuk, for her to want to get involved. "If my husband writes something and wants me to do it, I'll do it. But right now—I can never say never," she said of Falchuk, an Emmy-nominated writer. She did express interest in heading back into the theatre however. "There's something about theatre that's just exhilarating," she exclaimed. "It's really the actor's medium, right? You're on stage, you're in control of your performance."

The Kardashians are grateful for the work done behind the scenes of "Keeping Up With the Kardashians" and are showing that gratitude with an epic gift. According to TMZ, Kim Kardashian West, Kourtney Kardashian, Khloe Kardashian and Kris Jenner gifted 30 people from the crew with Rolex watches, following the shooting of the show's final episode last week. The gift, which was presented after the family and production team made speeches and shared stories of their favorite memories from the past 20 seasons, was said to cost the family around $300,000 in total.

Carrie Underwood may be raising a singer, but she is not a stage mom. In a virtual appearance on "The Drew Barrymore Show," Underwood opened up about her 5-year-old son, Isaiah, who appeared on her Christmas album, "My Gift." "You can kind of tell when someone has pitch. He can sing along with me and you can tell what song he's singing if he's just singing on his own, because he's singing the correct notes," the 37-year-old explained. "He's almost 6 but he is just a little guy. So I don't know if he'll have that or have that passion at all." Underwood said she and husband Mike Fisher are "supportive" of whatever their son wants to do, but "he definitely has pitch so I figured him coming in and singing, we could make it to where [we] could use the best parts of whatever he did and make it good." Isaiah, who sang on his mom's "Little Drummer Boy,"  called the experience of recording music with her son "overwhelming in a good way" and "very emotional."

Ryan Dorsey posts tribute to Naya Rivera on her birthday

On January 12, Naya Rivera would have turned 34 years old. In her honor, the actress, who passed away in July after drowning in Lake Piru, was commemorated by her ex, Ryan Dorsey on and offline. Dorsey visited Rivera's grave solo on Tuesday, bringing the mother of his son, Josey, a small bouquet of sunflowers. He also posted a tribute to her on social media. The 37-year-old captioned a black and white photo of himself, Rivera and their son, "Just as surreal as it is real that you're gone. If that makes sense, but none of this still makes any sense," he wrote on Instagram. "34..I could just hear you saying "Ah, I'm old AF now!" Ha…Rest easy old lady…"

Rebel Wilson shares that she was once kidnapped at gunpoint

Rebel Wilson shared a "petrifying" memory from an African vacation in a recent interview with Sky One's "Straight Talking" via Daily Mail. Wilson, who was in rural Mozambique at the time, explained during the interview that she was with a group of people on a cattle truck when the incident occurred. "These men came on another truck with a lot of guns," she recalled. "[They pulled up beside us] with the big guns and they were like, 'Yeah, you've got to get off your truck.'" Wilson and the other travelers were then taken to a house in the middle of nowhere. "They sat us down, and I said, 'Everybody link arms,' because I was petrified in the night that they might want to take one of the girls or something," she explained. By morning, the group was released (with no explanation of why they'd been kidnapped to begin with) and they headed to the South African border. "I think maybe those guys, maybe, used us to smuggle illegal things in the bottom of the truck," she theorized, without mentioning how long ago the horrifying experience happened. Despite the scary incident, Wilson says that she felt she was "very good" during it. "I was like a team leader," she explained.

On Sunday, January 10, Bruce Willis was photographed entering and leaving a Rite Aid in Los Angeles without a mask on. According to a Page Six report, the "Die Hard" actor, who wore a scarf around his neck, was asked to leave the store by an employee and exited without purchasing anything. In light of the strong reaction to Willis' behavior, which happened amidst COVID-19 surging in Los Angeles, the 65-year-old released a statement to People magazine. "It was an error in judgment," he explained, adding, "Be safe out there everyone and let's continue to mask up."

President-elect Joe Biden's inauguration is set to be a star-studded affair. Biden, and his Vice President, Kamala Harris, will ring in the new administration with a 90-minute primetime special called "Celebrating America." According to a press release, "the program will showcase the American people's resilience, heroism, and unified commitment to coming together as a nation to heal and rebuild." Tom Hanks will host the program, which will air at 8:30 PM when the newly sworn-in president is typically making rounds at inaugural balls, something they have to forgo due to COVID-19. In addition to remarks from Biden and Harris, the event will include performances by Jon Bon Jovi, Demi Lovato and Justin Timberlake. Lovato tweeted her excitement about the announcement, writing that she was "honored" to be joining them. "I was left speechless when I was asked to perform," she added. For his part, Timberlake shared that he would be performing his new song, "Better Days," at the inauguration. "This song was our way of doing what little we could to encourage everyone to stay hopeful and to keep working towards a better future," he tweeted. "We have a long way to go to fix, undo, and rebuild this country… but I hope now, despite the past four years, we're on our way."

Ellen DeGeneres addressed her COVID-19 diagnosis from last month in her first talk show episode of 2021. "Obviously there are a lot of negative things going on, so instead I want to talk about something positive – my COVID test…it was positive," said DeGeneres, who paused her show for a few weeks last month in light of rising coronavirus cases in California. "So yeah, I tested positive before the holidays and I'm fine now, I'm all good, I'm all clear." The talk show host went on to share that she was sitting in hair and makeup when her assistant told her she tested positive. "Everyone around me ran away," she said, adding that she left the studio immediately. "For the first three days, I slept like 16 hours a day. And then on the fourth day, I woke up with back spasms, and I thought I had pulled a muscle or had slept weird because I was in a different bed," she shared. "But it just persisted, and the doctor put me on pain pills and muscle relaxers. Jackpot! Finally this thing is paying off. So anyway, the pain pills did not work, and my back got worse. It felt like I had cracked a rib…you know how I make you feel when you laugh so hard your ribs hurt? That's how it felt – I finally understand how you feel." She was then put on a steroid pack and started to feel better. "I'm very fortunate, and very, very blessed that that was it for me," the 62-year-old concluded. "The weird thing is, I don't know where I got it. I still don't know where I got it. I wear a mask, I wash my hands, I only lick three or hour door handles – so it's a mystery how that would happen."

Anne Hathaway does not want anyone to call her Anne. On the "Tonight Show Starring Jimmy Fallon" Fallon asked if he should call her Anne, or her nickname, Annie. "Call me Annie, everybody, everybody, call me Annie, please," she asked. She went on to explain that in her personal life, the only person who calls her Anne, is her mother. "She only does it when she's really mad at me, like really mad. So every time I step out in public and someone calls my name, I think they're going to yell at me." Hathaway explained how she ended up locked into being an "Anne" professionally. "When I was 14 years old, I did a commercial, and I had to get my SAG card and they asked me, 'What do you want your name to be?'" she added. "And I was like, 'Well, it should be my name. My name's Anne Hathaway.' So that seemed like the right choice, but it never occurred to me that for the rest of my life, people will call me Anne."

Jessica Szohr is a mom! The "Gossip Girl" actress and her boyfriend, Brad Richardson, have welcomed their first child, a daughter named Bowie Ella Richardson. "Added a little special sweetness to our family and some new directions to our journey on 1-11-21," she posted on Instagram on January 13. "This journey with Brad and Lexi has been one of the most beautiful experiences of my life. To then create a human that is absolutely perfect in our eyes and put a feeling in my heart I didn't know existed is beyond words. I have all the feels and she is really something special." 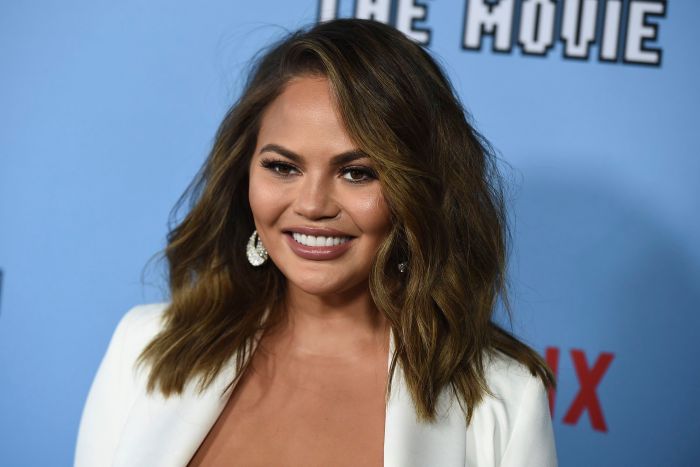