Why wear just one designer look when you can wear two … or more?! Wonderwall.com rounded up all the stars who had wardrobe changes during the 2019 Grammys, starting with Miley Cyrus. The singer-actress started music's biggest night in a black Mugler pantsuit featuring an oversized jacket. Keep reading to see how she and more stars switched up their looks…

RELATED: The most buzzed-about moments of the 2019 Grammy Awards

Miley Cyrus risked a wardrobe malfunction in a Saint Laurent ensemble featuring a vest — which she wore sans shirt — while performing with Shawn Mendes during the Grammys.

RELATED: The best photos from inside and backstage during the 2019 Grammys

Miley Cyrus looked anything but mellow in a lacy yellow Valentino Haute Couture suit while performing during the tribute to Dolly Parton.

RELATED: The cutest couples of the 2019 Grammy Awards

Kacey Musgraves walked the red carpet in a strapless Valentino Couture confection with a red tie at the waist.

Kacey Musgraves donned a Western-inspired jumpsuit for the tribute to Dolly Parton.

Kacey Musgraves performed her song "Rainbow" in a white sleeveless Solace London gown with a high neckline and a thigh-hight slit.

Kacey Musgraves took home top honors — album of the year — in one of our favorite looks of the night: a voluminous red silk Valentino minidress with a high-low hemline.

Alicia Keys opened the Grammys in a long-sleeve green dress with a fringed belt at the waist, which she wore with a multi-colored Emilio Pucci headscarf.

Later in the show, Alicia Keys sported sparkly loose-fitting pants over a black Alix bodysuit with a plunging neckline. She topped off the look with a wide-brim hat.

Alicia Keys donned a black leather jumpsuit with a tie at the waist toward the end of the show.

Alicia Keys closed the Grammys in a red jumpsuit with a cape.

Cardi B walked the red carpet in a super-bizarre vintage Mugler confection.

Cardi B performed her hit "Money" in a purple-and-black cape with statement shoulders, which she wore over a bodysuit with silver details across the bust and midriff and leopard-print tights.

Cardi B picked up the Grammy for best rap album in a white off-the-shoulder dress with a fringed skirt, which she wore with long gloves featuring the same floor-length fringe.

Cardi B ended the night in a black feather-trim duster, which she wore over a sheer black bodysuit while posing with the president of The Recording Academy, Neil Portnow.

Lady Gaga sparkled in a Perry Meek jumpsuit with a plunging neckline while performing her hit "Shallow" during the Grammys.

Lady Gaga later sported another Celine by Hedi Slimane ensemble: a studded top with fishnets, boots, a fascinator … and not much else!

Lady Gaga ended the night in a studded black jacket, which she wore over black underwear and fishnets while hanging out with Mark Ronson at his Club Heartbreak Grammy Party.

Katy Perry landed on many worst-dressed lists with her red-carpet look: a strapless pink Balmain dress with a bubble skirt.

Like Kacey Musgraves, Katy Perry donned a Western-inspired red jumpsuit for the tribute to Dolly Parton.

Jennifer Lopez disappointed on the red carpet in a sleeveless white Ralph & Russo dress, which she wore with an extra-wide-brim hat.

Jennifer Lopez kicked off the Motown tribute in a sparkly black gown with pink feather trim on the sleeves, which she wore with matching over-the-knee boots.

Jennifer Lopez then stripped down to a Zuhair Murad bodysuit.

After that, Jennifer Lopez covered up with a massive pink feathered jacket and another extra-wide-brim hat.

Chloe Bailey and Halle Bailey of Chloe X Halle ended the night in neon dresses with side cutouts, which they showed off while posing with John Mayer at the Sony Music Entertainment Post-Grammy Reception.

Camila Cabello looked pretty in pink in Armani Prive on the red carpet.

Post Malone sported one of the best menswear looks of the evening — a custom pink Ashton Michael suit — on the red carpet.

Post Malone had another excellent menswear moment later in the evening in a green velvet suit with a dragon embroidered across the jacket.

Dolly Parton performed a medley of her biggest hits in an embellished white dress with a sheer cape detail.

St. Vincent donned an over-the-top white minidress with ruffled satin trim and star-shaped studs while picking up the Grammy for best rock song with collaborator Jack Antonoff during the non-televised portion of the evening.

After winning a Grammy during the non-televised portion of the evening, St. Vincent walked the red carpet in a bizarre long-sleeve Giambattista Valli dress with a high-low hemline and an oversized bow at the neck.

St. Vincent ended the night in a velvety off-the-shoulder bodysuit, which she wore with a massive belt and over-the-knee Versace boots.

Maren Morris disappointed in a floral-print Galia Lahav Couture confection with a giant yellow floral design on one shoulder on the red carpet.

Maren Morris swam in fringe with the white long-sleeve dress she wore while performing with Dolly Parton and Miley Cyrus.

Maren Morris showed off her third look of the evening — another long-sleeve white dress — while posing with John Mayer backstage.

Miguel walked the red carpet in purple slacks, a white button-down and a white blazer, while his missus, Nazanin Mandi, stunned in an animal-striped Alexandre Vauthier dress with a plunging neckline.

Brandi Carlile sported black slacks and a white long-sleeve blouse with a tie at the neck while accepting an award during the non-televised portion of the evening.

Brandi Carlile worked the red carpet in a chic black suit with silver detailing and a bowtie.

At the end of the night, Brandi Carlile posed with her Grammys in black slacks and an embellished black jacket.

Eve walked the red carpet in a black Ashi Studio creation: a slacks-skirt hybrid with a train.

Later, Eve changed into a white jumpsuit with an asymmetrical cape.

H.E.R. worked the red carpet in a colorful Coach jumpsuit.

H.E.R. donned her second sparkly look of the night while performing her hit "Hard Place."

At the end of the night, H.E.R. posed with her Grammys in a fabulous neon-yellow ensemble and sparkly silver sneakers.

Alessia Cara hit the red carpet in a lacy black Self Portrait dress.

Andra Day donned a similar dress — but in a deep-green shade — while performing as part of the tribute to Aretha Franklin.

Fantasia Barrino walked the red carpet in a white Valdrin Sahiti gown with one black sleeve.

Fantasia Barrino kept things simple in a black long-sleeve gown with silver fringe while performing as part of the tribute to Aretha Franklin.

Ricky Martin sported a black Berlutti ensemble while walking the red carpet with his son, Matteo.

Ricky Martin rocked a white ensemble while opening the Grammys with Camila Cabello.

Sophie Hawley-Weld donned a pink fringe dress with a plunging neckline during Republic Records' Grammys afterparty, while her Sofi Tukker band mate, Tucker Halpern, played with prints, pairing a black button-down featuring a tiger motif with a white jacket featuring a colorful print on the bottom half, black slacks and boots. 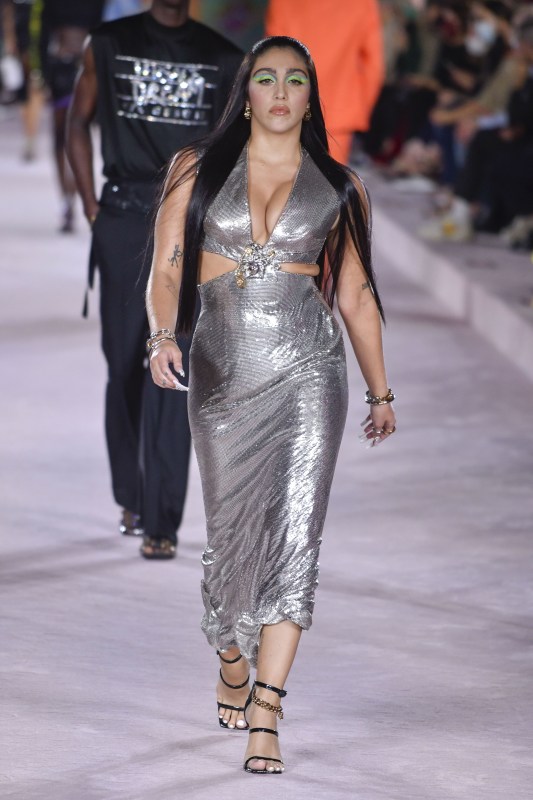