Hair today, gone tomorrow. Join Wonderwall.com as we take a look back at some of the most shocking celebrity hairstyles and colors the stars have debuted over the years… starting with Christina Aguilera's ginormous platinum braided afro at the 2001 Blockbuster Entertainment Awards. The pop star decided to go big — we're talking really big — with this brilliantly blonde style, which was given extra drama with a crown of shiny braids. We love how Christina wasn't afraid to let her hair (even if it was a wig) take up all the space. Get it, baby girl. Keep reading for more…

This pop star's known for changing her locks depending on her mood, but one of our absolutely favorites was Katy Perry's bright pink 'do at the 2011 MTV Europe Music Awards. Combining vintage style (like these bumper bangs) with an electric color gave Katy a look that was both edgy and timeless.

We all know Jennifer Lopez is a fabulous, fit and phenomenal fashion icon, so it makes this photo from the 2002 Academy Awards just a little more painful to look at. The stylist who let Jenny leave the block with this big, bouffant hairdo needs to have their license revoked!

When you talk about shocking celebrity hair, one actress immediately comes to mind: "Felicity" star Keri Russell. Back in 1999, Keri caused a national panic attack when she cut her trademark long, curly hair on the show and in real life. The reaction from fans was immediate and extremely negative. Keri received death threats, ratings on her show plummeted and her haircut created a pop-culture moment that few '90s fans will ever forget.

What made this cut and color on Miley Cyrus so absolutely shocking was that it happened in 2012, less than a year after she ended her tenure as the sweet, long-haired honey-streaked brunette teen on the hit Disney Channel series "Hannah Montana." It was the first time Miley stepped out sporting a bold new style, giving us a tiny taste of all the wild looks to come.

We just have one question: Why? According to GQ, George Clooney told Rosie O'Donnell that he lost a bet and that's why he stepped out in Hollywood in April 1998 with heavily gelled platinum blonde hair. Thankfully, George returned to his regularly scheduled dark 'do shortly after.

New hair, who dis? That would be Oscar-winning actress Emma Stone, who looks completely different with this 2019 color. The former blonde and redhead has worn darker hair before too: In 2016, she showed up at the Met Gala in full brunette mode.

She's dyed her hair nearly every shade in the rainbow, but Kim Kardashian West's most shocking look was probably these long, silver tresses in 2017. Technically called "platinum gray," her hair blurred the line between growing old and glowing up.

At the 2000 Academy Awards, Angelina Jolie went pure vamp in all black with matching waist-long, jet black hair. Looking like a mix of Elvira, Mistress of the Dark and Morticia Addams, Angie went on to win an Oscar and creepily kiss her brother, making the night (and that hair) go down in infamy.

Remember that time Shia LaBeouf rocked a mullet and a rattail in 2015? If you didn't, now you do and like us, you'll never be able to unsee it.

Thanks to the internet, the world will never forget when platinum blonde singer Gwen Stefani showed up at the 1998 MTV Video Music Awards looking extraterrestrial with this bizarre blue hairstyle, which was made even funkier thanks to her bedazzled face and temporary shoulder tattoo. We wonder what Gwen's current beau, country music singer Blake Shelton, has to say about this interstellar style?

Natalie Portman shaved her head for her role in "V for Vendetta" in 2005. Fun fact: She was so dedicated to her craft she shaved her head in one take to fully experience the moment.

Honestly, we could devote an entire slideshow to Grammy-nominated rapper Nicki Minaj's ever-changing hairstyles and colors. One of the most shocking was her green-tipped A-line platinum blonde (with bangs!) look worn at the 2010 American Music Awards.

Um, we're just shocked that Zendaya didn't dye her hair red sooner. The "Spider-Man: Far From Home" actress and Lancome spokesperson debuted a super-sexy and super-unexpected red hue in 2019, leaving us all drooling in her wake.

Perhaps the pressure of having one of the most iconic haircuts of the '90s made "Friends" star Jennifer Aniston feel like self-sabotaging. At the 1999 Emmy Awards, Jen decided to throw caution to the wind and wear her hair in these frizzy, loose faux-dreadlocks. The culturally appropriated style did nothing to enhance her gorgeous gown and remains a cringe-worthy reminder that not all hairstyles are for everyone.

Anne Hathaway cut off her long locks for her role in 2012's "Les Misérables." When she offered to go super-short, she didn't think it was that big of a deal, but once it was done, all she could do was cry. She grew out her locks a smidge and rocked this edgy pixie cut during awards season in 2013.

Was Maroon 5 frontman Adam Levine having a midlife crises in 2014? From the blindingly bright platinum color of his hair in this Instagram pic, we're guessing the answer is yes. Thankfully, it looks like then-fiancé Behati Prinsloo (who's now his wife) still loved him anyway.

Fast-forward to September 2019 and Adam Levine was back at it! He debuted what he dubbed his new "corn hawk" look on Instagram, and controversy ensued.

What makes actress Millie Bobby Brown's 2019 hair so shocking is that it's so different from anything we've seen on her before. We love her flowing, honey-colored locks, which have the unintended effect of making the teen "Stranger Things" star — whom the world first got to know as a 13-year-old with a shaved head — look way more grown up.

"The Tudors" and "Game of Thrones" actress Natalie Dormer wasn't the first celebrity to rock a half-shaven head, but hers was one of the most memorable. In this January 2014 pic, Natalie delivered some side-skull via an edgy style featuring a fishtail braid crown to hold it all in place.

Dame Helen Mirren still has a few hairstyle surprises up her sleeve. Helen arrived at the premiere of "The Best Years of a Life" at the 2019 Cannes Film Festival feeling herself with this bubblegum pink pixie cut. At 74, this legendary star still knew how to keep us inspired.

It wasn't just Joaquin Phoenix's unkempt, overgrown hair and scraggly beard that shocked us in 2009 — it was his entire persona. Thankfully, Joaquin's disheveled style — and his announcement he was quitting acting to become a rap star — was all a joke, albeit a bad one. Unbeknownst to the world, Joaquin went undercover as an unstable version of himself for his 2010 documentary-style film "I'm Still Here."

Sometimes a girl needs a change. To celebrate the end of "Game of Thrones," actress Emilia Clarke chopped her shoulder-length blunt bob into a fresh, short pixie cut. In this adorable Instagram post from 2018, Emilia joked about telling her stylist, Jenny Cho, "I'm thinking when Gwyneth [Paltrow] and Brad [Pitt] had the same hair cut," to which Jenny replied "I got 'chu."

She bad and she knows it. In this 2009 pic, Rihanna looks way cooler than we could ever aspire to be with her hair slicked back and up into a tall pompadour at a London screening of "Inglourious Basterds." Notice RiRi's also rocking a side shave, giving the classic style an edgy, modern twist.

While Sanaa Lathan's beautiful bald head might have been for her role as Violet in "Nappily Ever After," the fact that she actually shaved her real hair was a shocker. In 2017, Sanaa shared this Instagram selfie, saying, "Growth #NappilyEverAfter #Violet." In a 2018 interview with Health magazine, the "Love & Basketball" star shared that shaving her head was "terrifying" but also "really powerful and kind of weirdly cathartic and freeing."

Another music star whose hair is a revolving door of styles and colors is Grammy- and Oscar-winning singer Lady Gaga. In this September 2012 picture, Gaga's hair time traveled from the 1960s in a towering auburn beehive style complete with a gold top hat pin and heavy bangs. The retro look was for the launch of her Fame perfume line at Macy's in New York City.

We had a hard time picking which of Cardi B's ever-changing hairstyles and colors shocked us the most. We settled on this pastel green bob from 2018 because even though the style is relatively sleek, the color is a vibrant detour from her usual favorites, which include pink, silver and black.

Nicole Richie gave us both shock and awe with her silver-gray hair at the 2013 Met Gala. The actress and fashion maven has a long history of hair transformations, but this stunning look was one that we still can't stop stanning.

Shocked? Maybe not, but blonde rapper Iggy Azalea's super-sleek blue hair was a surprise nonetheless. The "Fancy" rapper debuted this hue in July 2019, giving us all major mermaid inspiration. 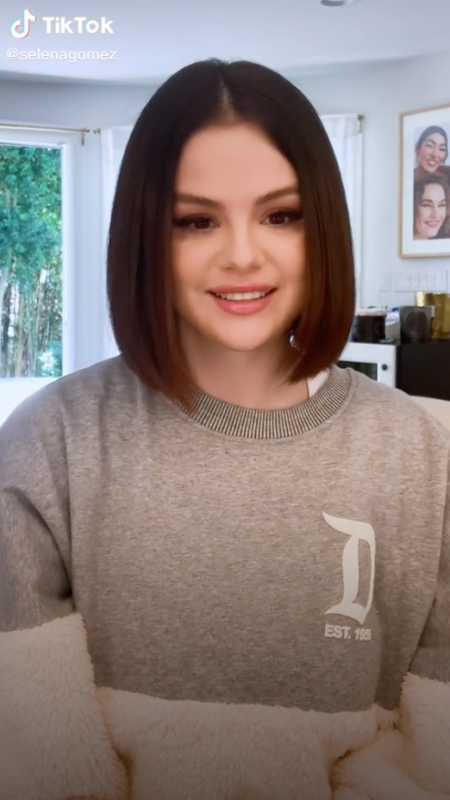