Can you believe it's been a quarter century since the Screen Actors Guild Awards debuted? In anticipation of the 26th Annual SAG Awards airing on Jan. 19, 2020, Wonderwall.com is taking a look back at the night it all began to see what the biggest celebrities wore to the inaugural show in 1995… starting with the lovely Halle Berry, who blew us all away in this sleeveless black bodycon dress. Keep reading to see more looks from the very first Screen Actors Guild Awards…

One of the biggest trends of the night at the first SAG Awards was black and white. Hollywood husband-and-wife duo Tom Hanks and Rita Wilson certainly dressed the part, with Rita in a sleeveless white satin gown and Tom — who won the outstanding actor statue for his work in "Forrest Gump" that night — in a black tux.

RELATED: See what celebs have worn to court over the years

We almost didn't recognize actress Robin Wright at the 1995 SAG Awards. The "Forrest Gump" star arrived at the inaugural awards show — where she was nominated for outstanding supporting actress for her work in the film — wearing a sleek and sophisticated black gown paired with a black blazer. While we think the long-strapped mini purse can go, we love that Robin kept her flowing blonde locks long and loose on the red carpet.

RELATED: Things you might not know (but should) about Robin Wright

At the 1995 SAG Awards, John Travolta and wife Kelly Preston played matchy-match in all black. While Kelly was sparkling in her beaded chevron-patterned gown, John — who was nominated that night for outstanding lead actor for his work in "Pulp Fiction" — kept it OG in a black-on-black tuxedo.

Pals Johnathon Schaech and Ellen DeGeneres were seen hanging out on the red carpet at the 1995 SAG Awards . Johnathon chose a black tux with a white shirt and contrasting collar while Ellen — who was nominated that night for outstanding actress in a comedy series for her performance on her eponymous TV show — took a softer style approach in a lavender suit.

Former couple Susan Sarandon and Tim Robbins were both nominees at the first ever SAG Awards in 1995. Susan, who wore a sleeveless black gown with an asymmetrical neckline and carried ruched shawl, earned a nomination for outstanding performance by a lead actress for her work in the movie "The Client" while Tim, who wore a double-breasted tuxedo, was nominated for his lead performance in "Shawshank Redemption."

Husband-and-wife duo David E. Kelley and Michelle Pfeiffer were hand in hand at the 1995 SAG Awards. David, a longtime TV writer and producer, arrived at the show in a simple and slightly oversized tux while Michelle donned a pretty white skirt paired with a tuxedo-style jacket and multi-strand choker. We love her gold-and-white clutch and neutral flats too!

Thanks to the camera angle, it almost appears as if "Friends" star Lisa Kudrow was rocking linebacker shoulders at the 1995 SAG Awards. (Thankfully, that's just the back of a nearby attendee!) Lisa, who was nominated that night as part of the ensemble cast of "Mad About You," donned a simple black minidress with a beaded hemline and topped it off with a black velvet cape.

At the 1995 SAG Awards, Jerry Seinfeld was photographed holding hands with his much younger girlfriend, Shoshanna Lonstein. Jerry, who was 40 at the time and nominated that night as part of the ensemble cast of his eponymous comedy series, wore a classic tux while 19-year-old Shoshanna donned a corseted peasant-style tank dress with a multicolored metallic skirt.

While Jerry Seinfeld's teenage date managed to pull off a peasant dress with flair at the 1995 SAG Awards, actress Sharon Lawrence's version of the trend was a red carpet fail. But Sharon was still a winner that night: She and the cast of "NYPD Blue" took home the first Screen Actors Guild Award for outstanding performance by an ensemble in a drama series.

Fellow "NYPD Blue" star Gail O'Grady channeled her inner pageant queen at the 1995 SAG Awards, where she and her cast took home the prize for outstanding performance by an ensemble in a drama series. Gail arrived at the awards red carpet in a pale lavender satin gown with a matching sash and big, debutante hair. Adding to her glitzy look were giant sparkly diamond earrings and a megawatt smile.

Writer-director Quentin Tarantino attended the 1995 SAG Awards in support of John Travolta's nomination for outstanding lead actor in "Pulp Fiction." Always one to stand out, Quentin skipped the traditional tuxedo and instead went with this Mandarin collared suit.

Jessica Lange was clearly feeling herself at the 1995 SAG Awards. Hitting up the red carpet in an all black tunic-style pantsuit, Jessica was radiant, perhaps thanks to her nomination for outstanding performance by a lead actress in the movie "Blue Sky."

We love that Janet Leigh and Jamie Lee Curtis turned the first Screen Actors Guild Awards into a mother-daughter date night. While Janet looked brilliant in a white dress with a bold floral-print jacket, Jamie Lee — who was nominated that night for outstanding performance by a supporting actress for her work in the movie "True Lies" — kept her look simple and fashionable in a sleeveless midnight blue knee-length dress that was belted at the waist.

At the very first SAG Awards in 1995, a tux-clad Gary Sinise — who was accompanied by wife Moira, who wore a patterned black velvet dress — was up for two statues for two different performances: best supporting actor for his work in "Forrest Gump" and best actor in a TV movie or miniseries for his work in "The Stand."

Another Hollywood star with two nominations at the 1995 SAG Awards? Actress Candice Bergen. Candice, who wore a black tuxedo paired with a multi-strand choker and sky-high hair, had nods for outstanding performance by an actress and as part of an ensemble for her work on the comedy series "Murphy Brown."

The joy on actress Jane Seymour's face at the 1995 SAG Awards is infectious, even if we're scratching our heads about her fashion choices. Jane, who was nominated that night for outstanding performance by an actress for her work on the drama series "Dr. Quinn, Medicine Woman," paired her youthful pale pink polka dot and bow-embellished baby doll dress with matching opera-length gloves, a chiffon shawl and satin kitten heels.

We're not sure how we feel about Patrick Stewart with a goatee. At the 1995 SAG Awards, Patrick — who was nominated for outstanding performance by an actor for his work on "Star Trek: The Next Generation" — was rocking the facial hair style (and a tux) beside his girlfriend and future ex-wife, producer Wendy Neuss, who wore a lace-paneled black minidress.

Hello, Swoosie Kurtz! At the 1995 Screen Actors Guild Awards, the actress — who was nominated for outstanding performance by an actress for her role on the drama series "Sisters" that year — cut a stunning silhouette in this figure-flattering pearl white one-shouldered gown. With its rhinestone broach, swirled accordion pleats and gathered side sash, Swoosie looked like a mythological goddess in the flesh.

There's nothing like a woman in a tux. At the 1995 SAG Awards, "Dallas" actress Linda Gray rocked the red carpet in this powder blue fitted tuxedo jacket with flowing slacks. While we're not ones to favor shoulder pads, they definitely add a sharp intensity to Linda's look that we love.

The late, great Martin Landau was all smiles at the 1995 Screen Actors Guild Awards alongside his longtime companion, actress Gretchen Becker. Martin — who won the award for outstanding performance by a supporting actor for his work in the movie "Ed Wood" — was dapper in a traditional tuxedo with cummerbund and bow tie while Gretchen, who had a small role in the same film, donned a flapper-inspired sleeveless red velvet minidress with a decorative fringe hemline.

Silver screen siren Ginger Rogers made one of her final red carpet appearances at the first ever SAG Awards in 1995 (this photo was taken two months before her death at 83). The Oscar-winning actress arrived in flowing white slacks, a matching blouse and a sparkling blue, gold and white blazer that she paired with gold flats and a long necklace. 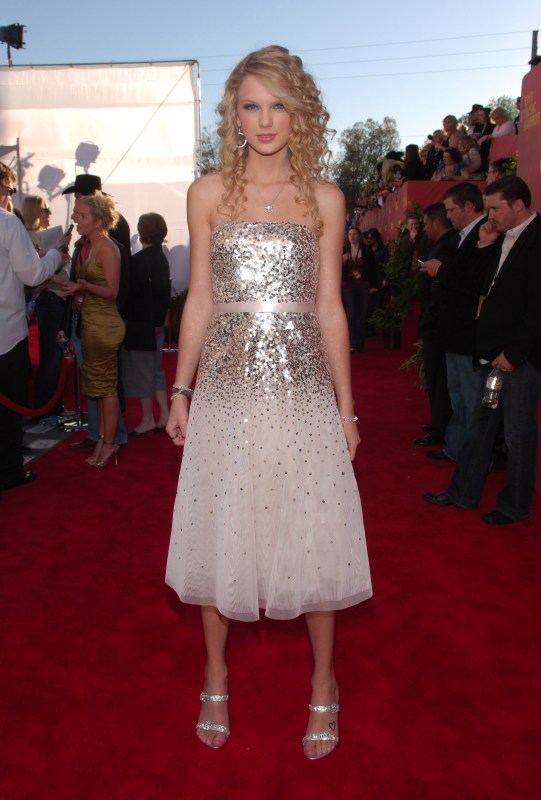