The People's Choice Awards return for the 47th time on Dec. 7, 2021. In honor of the award show where fans get to choose their favorites, Wonderwall.com is flashing back to 2011 to see what the stars wore to the PCAs 10 years ago, starting with this reality TV star-turned-model… Long before Kendall Jenner was killing it on runways across the world, she hit the 2011 PCAs red carpet in a draped and belted one-sleeved beige Bebe dress bizarrely paired with black brogues. As for sister Kylie? See her next…

Ten years ago, Kylie Jenner posed for photos at the PCAs in an outfit she wouldn't be caught dead in today. The then-13-year-old "Keeping Up With the Kardashians" star wore a minidress with a tiered white sheer skirt and a fitted black bodice with a skinny belt and T-strap heels.

Singer-songwriter Taylor Swift — who took home top honors as favorite country star that year — glowed in a Grecian-inspired peachy pleated J. Mendel dress with neutral heels and a pastel bangle. The look was simple, but stunning.

RELATED: All the times Taylor Swift has totally rocked the color red

Presenter and nominee Jennifer Aniston kept it casual in black tailored pants and a black vest.

Mila Kunis posed for photos backstage at the PCAs in a taupe J. Mendel strapless dress with asymmetric draping and a layered skirt that she paired with flesh-toned pumps.

"Keeping Up With the Kardashians" won for favorite TV guilty pleasure in 2011. Star Kim Kardashian, who attended the event with her sisters, wore a crinkly gold strapless gown, neutral peep-toe heels, a chunky gold necklace and her hair in a '60s-esque updo.

Kaley Cuoco supported "The Big Bang Theory" at the PCAs, which were held on Jan. 5, 2011. The comedy star wore a strapless white gown with her hair pulled tightly back, chandelier earrings and a bright pink lip, creating a look with a bridal feel.

Two-time PCA winner Katy Perry turned heads in a blue-and-purple Betsey Johnson dress that looked like it was made for her.

Performer and winner Selena Gomez attended the show in a flowing butterfly-print dress in a then-popular hi-low cut.

Favorite TV comedy actress winner Jane Lynch opted for a black suit with flared pants and a periwinkle shell underneath at the Los Angeles award show.

Emma Roberts played it safe in a flouncy strapless LBD she accessorized with copper earrings and heels.

TV doctor Kate Walsh — a nominee and presenter in 2011 — wore a strapless sapphire blue cocktail dress and pointy-toed black pumps to the show.

Julie Bowen, whose show "Modern Family" was nominated for two awards back in 2011, wore a coral dress with a flowy skirt. The show's matriarch accessorized her sunny look with gold peep-toe pumps and a matching clutch.

Khloe Kardashian — who was a redhead at the time — wore a strapless gray flowing dress to the PCAs back in 2011.

Maggie Q paired her gorgeous wild curls with a black studded dress that was highly embellished on her thighs and hips.

She's glowing! Ashley Tisdale's printed Farah Angsana gown was a total hit on the red carpet and worked beautifully with her tan and updo.

Minka Kelly wore an off-the-shoulder minidress in shades of brown and copper when she presented at the awards show.

Malin Akerman walked the red carpet in a white J. Mendel dress and added a playful pop of color to the ensemble with ruby red heels and a matching clutch.

Raven-Symone upped the drama in head-to-toe black at the 2011 PCAs. She wore leather pants, a black bra and a tiered ruffled jacket on top. Her gold earrings and dark eye makeup looked perfect against the outfit.

JoAnna Garcia Swisher kept things extremely simple in a black halter-style dress, matching black clutch and drop earrings at the show, which honors the most popular movies, music and television shows and the people who bring them to life.

Presenter Pauley Perrette made a statement at the 37th Annual People's Choice Awards in a hi-lo white dress with "NO H8" on it, a popular slogan at the time in California that urged people to vote no on Proposition 8, which kept same-sex couples from legally marrying in the state.

Tiffany Hines dazzled in a heavily embellished blue-and-black minidress. Her makeup was bold — turquoise eyeshadow and a pink lip — which popped just like her silver accessories.

Miranda Cosgrove, who presented at the 2011 PCAs, wore a sparkly silver shift dress with a shiny matching purse and black Mary Janes.

Lisa Edelstein, who won a People's Choice Award for her performance on "House," picked a short, strapless silver jacquard dress accessorized with silver-and-black strappy heels in 2011. 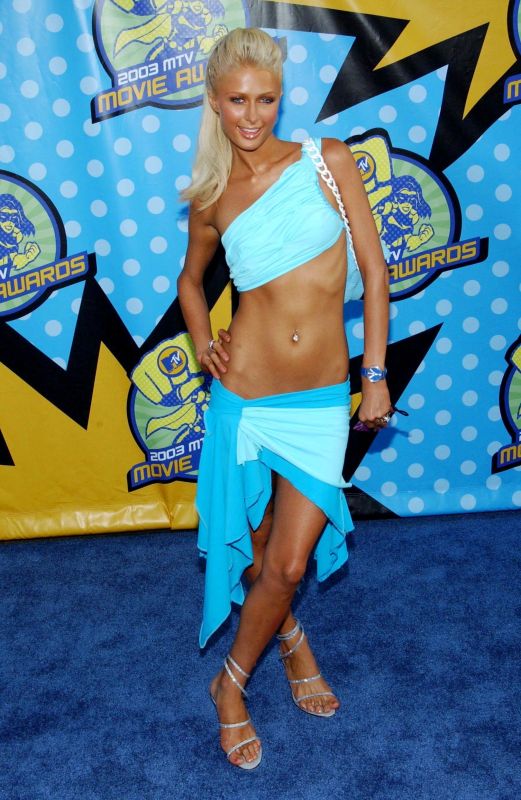 Up Next Paris Style!