Fashion "it" girl Zoe Kravitz turns 32 on Dec. 1, 2020. In honor of her birthday, Wonderwall.com is taking a look back at her best and worst fashion moments from over the years, plus those of several more stars who were born in December. It's quite the task where Zoe is concerned considering she's one of the best dressed stars in Hollywood. If you want to find a fashion miss on her highlight reel, you have to take a long look back — all the way back to 2010, when the "Big Little Lies" star sported this frumpy lilac frock at the Cinema Society's special screening of "Twelve" in New York City. Inexplicably, the two-tone dress featured asymmetrical sleeves (did she rip off one of the cuffs?) and the fabric was so badly worn, there were holes and frays in the skirt. Check out the giant tear along the hemline! To make matters worse, she completed her look with discolored striped slides with scuffed toes. Fortunately, she's come a long way since then…

Pinning down Zoe Kravitz's top style moment can be difficult — there are so many to choose from! One of our favorites is the fun and funky Saint Laurent feathered puff mini she donned for the Vanity Fair Oscar Party in Beverly Hills on March 4, 2018.

Taylor Swift, who was born on Dec. 13, really disappointed during the 2020 ACM Awards in a Stella McCartney ensemble. While we loved her sequined long-sleeved top and T-strap sandals featuring gold chains around the ankles, her high-waist khaki pants were truly horrendous.

Our all-time favorite Taylor Swift look? The pale pink Oscar de la Renta creation she donned during the 2014 Met Gala. The sleeveless gown featured a dramatic train with an open back and a bustle that was perfect for posing on the iconic staircase at the annual event.

Britney Spears, who was born on Dec. 2, has had some truly iconic fashion moments over the years … for better or for worse! Landing squarely in the "miss" column? The sheer black lace Reem Acra romper that she sported during the 2016 Billboard Music Awards. (The leftover fabric apparently went into creating the lengthy and completely unnecessary train.) She completed her befuddling getup with caged over-the-knee boots.

That's better! Britney Spears was a vision in white in a simple Randolph Duke gown during the 2000 Grammys. She perfectly channeled Old Hollywood by accessorizing with an Oscar de la Renta stole and a diamond necklace.

Julianne Moore, who was born on Dec. 3, can typically be counted on to deliver a major fashion moment … which is why we were so disappointed when she showed up to the 2018 Toronto International Film Festival premiere of "Gloria Bell" in this dreary strapless Givenchy Haute Couture confection. With its off-white hue and strips of fabric trailing from the back, the sheath gave us mummy vibes in the worst way possible.

On the opposite end of the spectrum, we loved everything about the gorgeous green off-the-shoulder Dior dress that Julianne Moore donned during the 2019 Cannes Film Festival premiere of "The Dead Don't Die."

Few celebs have a more divisive sense of style than Katie Holmes, who was born on Dec. 18. The fashion darling topped many worst dressed lists, for example, when she channeled Belle from Disney's "Beauty and the Beast" in this mustard off-the-shoulder Marchesa confection during the 2014 Met Gala.

Katie Holmes fared far better in a different off-the-shoulder dress at the 2017 Met Gala. She looked ultra-glam in a dramatic navy Zac Posen mermaid gown with a layered skirt.

Vanessa Hudgens, who was born on Dec. 14, typically kills on the red carpet. But she disappointed during the Art of Elysium's 2018 Heaven Gala in a matronly mustard Alberta Ferretti frock. The worst part of her age-inappropriate ensemble? The swaths of orange across both halves of her face. (Her bright orange eye makeup appeared to fade directly into her bronzy blush.)

So chic! Vanessa Hudgens knocked one out of the park at the Los Angeles premiere of "Once Upon a Time in Hollywood" on July 22, 2019. She donned a form-fitting velvet Giorgio Armani column dress with sheer panels and — the best part! — partially sheer front pockets. She clearly had a blast working this look on the red carpet!

We don't usually associate the word "tacky" with Alison Brie. And yet… The actress, who was born on Dec. 29, clearly took too much inspiration from her '80s-set Netflix show "GLOW" when she chose this gown for the 2018 SAG Awards. Her red one-sleeved Dundas dress featured a thigh-high slit and an iridescent lightning-bolt detail across the neckline and down one side. (We love her sapphire-and-lapis drop Irene Neuwirth earrings, though!)

Here's the Alison Brie we know and love! The petite actress looks best in tailored numbers like the tangerine sleeveless Brandon Maxwell column dress she donned during the 2020 Critics' Choice Awards.

Christina Aguilera, who was born on Dec. 18, has rocked some truly insane outfits over the years, but the one that pains us the most is the off-the-shoulder belted pinstripe 16Arlington dress with a massive train that she sported during the 2018 Billboard Music Awards. It's a shame because her minimal makeup and simple updo were fantastic.

A Christina Aguilera look we loved? The strapless peach Versace confection she donned during the 2010 Golden Globes. The asymmetrical gown featured a metallic bodice and an embroidered leather strap across one hip. Her adorable bob 'do and understated makeup really complemented the rest of her feminine but funky ensemble.

When it comes to style, Tyra Banks runs the gamut from fab to drab. A look we loathed, for example? The sheer black lace suit the supermodel — who was born on Dec. 4 — sported during the "America's Got Talent" season 12 kickoff event in Los Angeles on March 27, 2017. She made things worse by accessorizing with a giant gold statement choker and black suede boots. And worst of all? She completed her look with purple lipstick.

At another "America's Got Talent" event in Los Angeles the following year, Tyra Banks looked nothing short of regal in a one-sleeved burgundy Marc Bouwer gown with an asymmetrical neckline, a thigh-high slit and half-cape detail. This time, her hair and makeup were perfectly on-point.

Sienna Miller, who was born on Dec. 28, has been a fashion "it" girl for longer than we can remember, but that doesn't mean she always gets it right. Case in point? We were truly dismayed by the sheer Dior dress she wore to the 2017 Berlinale International Film Festival premiere of "The Lost City of Z." This is what Cher Horowitz would describe as "a full-on Monet" — from far away, it's OK, but up close, it's a big ol' mess. We loved the floral embroidery and the corset bodice, but the entire look became an instant miss when we noticed what was going on underneath: sporty briefs with Dior branding on the band.

Sorry, Dior, but Sienna Miller had much better luck with a floral embroidered gown from a different fashion house: Miu Miu. The actress's signature sophisticated-boho aesthetic was on full display during the 2015 Golden Globe Awards. This dangerously low-cut dress was all about detail — from the beaded flowers on the skirt to the sequined leaves along the neckline. Love!

Jenna Dewan, who was born on Dec. 3, also fell victim to the "black briefs under a sheer dress" trend, though that wasn't the only problem with the Marchesa confection she wore to the premiere of "The Hateful Eight" in Los Angeles on Dec. 7, 2017. To make matters worse, her black floral-lace frock featured beaded stripes in geometric designs across the bodice, weighing down an otherwise ethereal look. At least her hair and makeup were flawless!

SO much better! Jenna Dewan looked anything but mellow in a yellow strapless Carolina Herrera gown during the 2015 Golden Globes.

Bumblebee? More like spider web! Hailee Steinfeld, who was born on Dec. 11, donned a disastrous long-sleeved Balmain LBD to the premiere of her film "Bumblebee" in Los Angeles on Dec. 9, 2018. Sadly, she looked like she got dressed in a cute structured mini and then rolled around with a ball of twine before hitting the black carpet.

This is why Hailee Steinfeld is considered a fashion "it" girl: The young actress looked simply divine in a lovely lilac Vera Wang gown with sheer sleeves and a cape during the 2017 Golden Globes.

Janelle Monae, who was born on Dec. 1, scored a rare fashion miss in this bizarrely anatomical Jean Paul Gaultier dress at a Harper's Bazaar Gala during Paris Fashion Week on Feb. 26, 2020. From the feathered collar to the fringe hemline and coordinating statement sleeves, there was just way too much going on.

Perfection! The sparkling hooded Ralph Lauren Collection gown that Janelle Monae donned for the 2020 Oscars was truly a work of art. According to People magazine, it took 600 hours to construct the stunning dress, which featured 168,000 hand-embroidered Swarovski crystals.

Jennifer Connelly, who was born on Dec. 12, almost exclusively wears Louis Vuitton at red carpet events. Usually, that's just fine, but other times? Not so much. For instance, we hated everything about the psychedelic-futuristic mini the actress wore during the fashion house's presentation in New York City on May 8, 2019. (But we especially hated the random face on the belt detail at her waist. No, really, who is that?) The drop waist, poof sleeves and ruffled neckline totally threw off her proportions, and her austere updo only added to the problem.

A Louis Vuitton ensemble we can get behind? The darling sleeveless LBD Jennifer Connelly donned during the 2016 San Sebastian Film Festival premiere of "American Pastoral." We especially loved the juxtaposition between the mini's flirty asymmetrical layered skirt and its tough bodice with a chunky collar and oversized zipper detail, which the actress leaned into by wearing chunky platform boots.

We love Alyssa Milano, but we weren't wild about the two-tone Paule Ka wrap dress she wore during the 2018 American Cinematheque Awards. The hue left the former child star — who was born on Dec. 19 — looking washed out, while the fabric ultimately looked cheap. Even worse, she completed her look with silver heeled sandals, which clashed with the gold beadwork across her skirt.

Alyssa Milano had a glam moment in a black off-the-shoulder Pamella Roland gown with embroidery along the neckline during the 14th Annual UNICEF Snowflake Ball in New York City on Nov. 27, 2018. We especially loved the sheer cape detail! 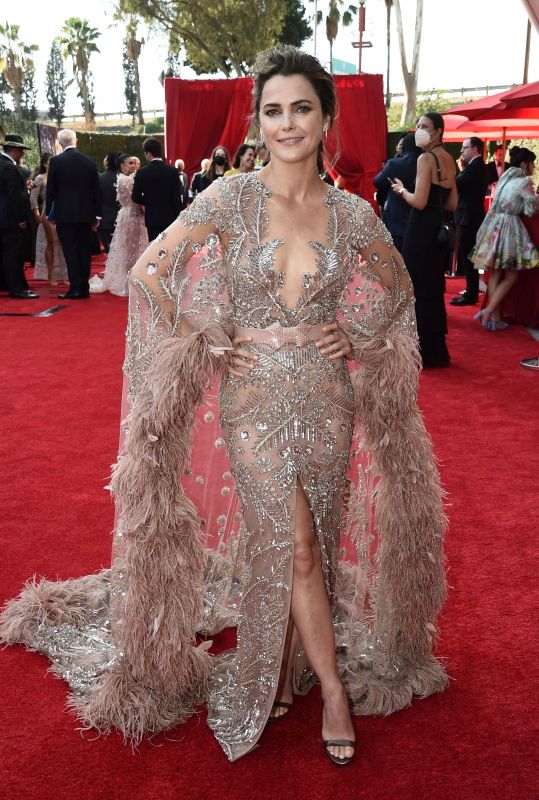