Happy October! It's time to check out the fashion tricks and treats of the month with Wonderwall.com, starting with this funky outfit… We weren't wild about the Fendi shirtdress that Demi Moore wore to Brian Bowen Smith's "Drivebys" book launch party in Los Angeles on Oct. 21. The strange hemline on the baggy long-sleeved polka-dotted frock lost us, but did pair well with Demi's black knee-high boots.

Anya Taylor-Joy was a vision in gold Dior at the "Last Night in Soho" premiere in Los Angeles on Oct. 25. The beauty arrived in this spaghetti-strap gown featuring a dangerously low-cut bodice and perfectly pleated skirt that made for some pretty great posing opportunities…

RELATED: Fashion hits and misses from the 2021 Met Gala

Gorgeous! The full-length flowy skirt of Anya Taylor-Joy's Dior gown allowed for some beautiful poses on the red carpet. And it was just as beautiful from the back, which we'll see next…

The back of Anya Taylor-Joy's Dior dress featured intricately connected thin straps that echoed the shape of the gown's full skirt.

What do you get when you mix a crop top, a hood, tulle, silver beading and a sheer skirt? A big miss! Gemma Chan arrived at the "Eternals" premiere in London on Oct. 27 in this puzzling pick from Zuhair Murad featuring a long-sleeved cropped hoodie covered in silver beading paired with a high-waisted, belted and flared full-length sheer skirt. Take a closer look…

A cropped hoodie on the red carpet? Gemma Chan sported this jazzed-up Zuhair Murad couture take on the casual item at the U.K. "Eternals" premiere.

Anna Kendrick was a beauty in a bubblegum pink Lanvin dress at the premiere for season 2 of "Love Life" in New York City on Oct. 24. The actress donned this sweet strapless mini with a sweetheart neckline and a dramatic bow detail at the back (which we'll see next!) and completed her look with black Alexandre Birman heels with another oversized bow detail.

Anna Kendrick's bold Lanvin mini included a sweeping bow detail along the back that culminated in a small train that trailed behind her on the red carpet.

Yvonne Orji arrived at the "Insecure" season 5 premiere in Los Angeles on Oct. 21 in this busy look. Between the mauve bustier, the wide-legged pink pants and the matching pale pink feather shawl, the Greta Constantine look, though unique, was not a hit in our book.

Hailey Bieber wowed in a sweet Miu Miu outfit at the ELLE Women in Hollywood Celebration in Los Angeles on Oct. 19. The stylish star's black-and-white coordinates included a crop top with a wide collar and a matching high-waisted skirt that she sported with black pumps.

Rachel Brosnahan's tan Michael Kors pantsuit was a gorgeous pick for the 15th Annual God's Love We Deliver Golden Heart Awards in New York City on Oct. 18, but she lost us when it came to her styling. The actress opted to go sans undershirt, which felt like a strange call considering the oversized nature of the jacket. We did, however, appreciate the way she matched her heels to the suit perfectly.

Not all pantsuits are created equal! Sarah Paulson attended the EMA Awards and Honors Benefit Gala in Los Angeles on Oct. 16 in this Magda Butrym set. And though we usually love this fashionista's red carpet picks, we were underwhelmed with this baggy ensemble — which she paired with a black undershirt, clutch and heels.

Gemma Chan arrived at the premiere of "Eternals" at the El Capitan Theatre in Hollywood on Oct. 18 in this dreamy Louis Vuitton confection. The white gown included lace and feather embellishments and an over-the-top plume-covered cape that cascaded behind her into a dramatic train. Let's take a closer look…

Check out that cape! Gemma Chan's feathered white cape trailed behind her on the black carpet, delivering a seriously glamorous moment.

Zendaya wowed at the premiere of "Dune" in London on Oct. 18. The star arrived in this sequined ivory Rick Owens design that included a structured collar, long sleeves and a mermaid-style silhouette complete with a small train. And there was even more detail from the back…

The back of Zendaya's Rick Owens dress featured an intricate detail that balanced out the train trailing behind her.

Yikes! We're not sure what was going on here, but TikTok star Bella Poarch arrived at the "Eternals" premiere in Hollywood on Oct. 18 in a jumpsuit-dress hybrid — complete with a hood and train — all in a metallic shade. Next!

Zooey Deschanel brought some spring vibes to the middle of fall with this Richard Quinn dress at the EMA Awards and Honors Benefit Gala in Los Angeles on Oct. 16. The star sported this sweet floral midi-length frock with tan pointy-toe pumps to the event.

Jessica Chastain arrived at the premiere of her movie "The Eyes of Tammy Faye" at the Rome Film Festival in this eye-catching Gucci gown. The sleeveless frock featured a blue bodice with a slit down the center and a red patterned skirt, but the most amazing element was the jeweled neckline…

Stunning! The Gucci gown Jessica Chastain wore to the premiere of "The Eyes of Tammy Faye" in Rome included a beautiful jeweled detail at the neckline. Though it looked like a necklace from afar, it was actually part of the gorgeous blue-and-red frock.

Caitriona Balfe attended the premiere of her film "Belfast" during the BFI London Film Festival on Oct. 12 in this busy frock. The dress, which was Stella McCartney for AZ Factory (a gown designed in honor of the late designer Alber Elbaz), featured an abundance of pleats — from the cape-like sleeves to a tiered layer at the waist and down the full floor-length skirt. Though we loved the structure, we think this bold of a silhouette would have been more effective in a vibrant shade rather than this dull metallic hue.

Bold in blue! Jessica Chastain arrived at a photocall for "The Eyes of Tammy Faye" during the Rome Film Festival on Oct. 14 in these bright coordinates. We loved the oversized blazer and knee-length skirt pairing from Gucci (especially with that slit!), plus the way she added contrast with a black bandeau and pointy-toe pumps.

Though we appreciated Posh Spice rocking some serious color, this strange ensemble that Victoria Beckham wore on Oct. 12 — a red-and-black blouse with high-waisted bright yellow pants from her own fashion label — was too much. And if that wasn't enough color, she also added a bright green Bottega Veneta bag to the mix.

No one does crop tops quite like J.Lo! Jennifer Lopez arrived at the premiere of "The Last Duel" at Lincoln Center in New York City on Oct. 9 in rich chocolate brown Herve Leger coordinates — a long-sleeved, high-necked top paired with a high-waisted fitted skirt — that combined for a sleek ensemble. She completed her look with strappy metallic sandals and a matching clutch.

The Loewe look that Zendaya wore to the Women in Film Honors Gala on Oct. 6 — a gray sleeveless column dress with a bold gold breastplate — received rave reviews, but we weren't as obsessed with this particular Loewe creation as we've been with others. Despite not loving the funky frock, we did appreciate the way her pointy-toe pumps matched the metallic detail on the gown perfectly.

One of our favorite looks of the month came from Ruth Negga, who sported this sweet pink Carolina Herrera number at a reception for the film "Passing" in London on Oct. 10. The midi-length dress, which featured puff sleeves and an otherwise fitted silhouette, paired beautifully with her killer matching Roger Vivier slingbacks.

Cynthia Erivo's cheery yellow Greta Constantine minidress was a much better pick. The star wore the sweet ruffled frock with pointy-toe black pumps at a screening of "Twenties" in Los Angeles on Oct. 11.

Socks with sandals? Hailey Bieber pulled off this controversial trend while grabbing coffee in Los Angeles on Oct. 5, adding leggings, a black crop top and a puffy leather jacket for a surprisingly chic streetwear fashion moment.

At the Chanel show during Paris Fashion Week on Oct. 5, Kristen Stewart put her own twist on a classic Chanel set, wearing a black lace bustier underneath a pink, white and black jacket and skirt combo. To complete her edgy ensemble, she rocked slouchy socks and loafers, resulting in an underwhelming getup.

The cute and casual Louis Vuitton coordinates Alicia Vikander wore at the Vuitton show during Paris Fashion Week on Oct. 5 scored her a fashion hit. The star's black-and-white look included a leather-trimmed jacket over a cute minidress that paired perfectly with black studded boots.

Our next miss? That comes from Farrah Abraham, who arrived at the Women in Film Honors Gala on Oct. 6 matching her hair color to her odd dress — a bizarre feathered and spiked silver frock with strange chain detailing and gold embellishments. Next up, get a better look at her coordinated tresses…

Farrah Abraham's elaborate updo — complete with braids and jewels — corresponded perfectly to her dramatic silver frock, which included chain and spike details throughout.

Amber Tamblyn's getup at New York Comic Con on Oct. 9 left a lot to be desired (mainly the absence of that cape!). Christian Siriano designed her gown, which featured long sleeves and a slinky pleated silhouette plus a seriously dramatic cape.

We adored the Louis Vuitton look that Phoebe Dynevor wore to the fashion house's Oct. 5 show during Paris Fashion Week. The silver separates included a sweet pink lace detail, thick white straps and a black bow at the waist. She completed the chic look with simple black sandals.

Phoebe Dynevor gave us another great look at an event in Cannes, France, on Oct. 8. Her sleek take on a pantsuit included a black crop top, an oversized jacket and fitted trousers. We loved the way she completed her look with pointy-toe pumps and a simple belt.

Another pantsuit we adored this month? The caramel-colored coordinates that Olivia Thirlby wore at New York Comic Con on Oct. 9, to which she added a bright white shirt and white pointy-toe pumps to complete her sharp look. 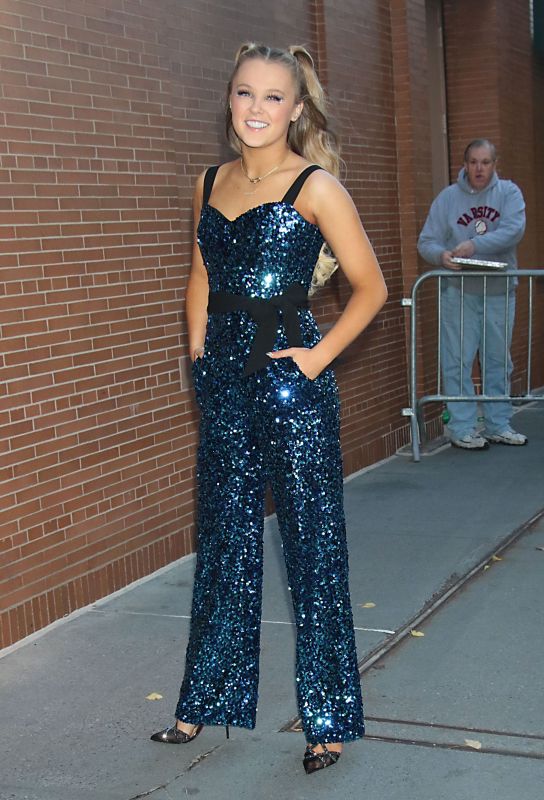