The EE British Academy Film Awards are the United Kingdom's equivalent of the Oscars — a prestigious award show put on by the British Academy of Film and Television Arts that honors the best in movies year after year. And, like America's Academy Awards, they also provide some fabulous — and not-so fabulous! — fashion moments. In honor of the 2021 BAFTAs — which this year are airing in two parts on April 10 and 11 — we're taking a look back at some of the most memorable ensembles in the award show's red carpet history. First up is this American movie star… Though it was simple, Angelina Jolie's menswear-inspired Yves Saint Laurent ensemble at the 2014 BAFTA Awards really stood out. We loved the undone dress shirt and tie paired with that perfectly fitted suit and heels.

Keep reading for more standout BAFTAs fashion through the years…

RELATED: Royals at the BAFTAs through the years

Jodie Turner-Smith not only aced maternity style at the 2020 BAFTAs — she was also one of the very best dressed stars on the red carpet that year in this glorious golden Gucci gown. The stylish star's halter-style dress featured a subtle all-over sparkle and showed off her baby bump to perfection.

RELATED: Cutest couples at past BAFTAs

Decades before crop tops on the red carpet were a thing, Gwyneth Paltrow rocked these black sequined separates at the 1999 BAFTA Awards.

Yikes! Elizabeth Hurley's 1998 BAFTA Awards gown was a walking wardrobe malfunction waiting to happen. The unfortunate orange, red and silver frock was essentially backless and held in place by a tiny string.

The Gucci gown that Rachel Weisz wore to the 2019 BAFTA Awards was fit for a princess! The vanilla tulle confection featured an off-the-shoulder neckline and dreamy, cascading tiers down its floor-length skirt. It also featured a stunning embellished belt detail that looked like amethyst stones from far away but up close, it was actually comprised of sequins in silver and varying shades of purple.

That feathered skirt! That intricately embroidered floral bodice! Only Cate Blanchett could have pulled off this insane textured Alexander McQueen gown at the 2016 BAFTA Awards.

The following year, Emily Blunt tried her hand at an edgy Alexander McQueen design like Cate Blanchett's — but failed. Emily wore this similar frock to the 2017 BAFTA Awards and just wasn't able to pull off that detailed bodice and over-the-top skirt.

Duchess Kate stunned in a white asymmetrical Alexander McQueen gown and a pair of pearl and diamond earrings that once belonged to her late mother-in-law, Princess Diana, at the 2019 BAFTAs, where she was accompanied by a dashing tuxedo-clad Prince William, who's served as president of the British Academy of Film and Television Arts since 2010.

Lovely in lilac! A pre-"Titanic" Kate Winslet arrived at the 1996 BAFTA Awards in this pretty silky sleeveless number complete with a matching clutch.

Lea Seydoux's Miu Miu getup at the 2014 BAFTA Awards was a major miss. From the strange sleeve length (a little more than short, but not quite three-quarter length) to the bedazzled bodice to that horrid miniskirt underneath a sheer full-length layer of chiffon, there wasn't one thing we loved about this look.

One of Kristen Wiig's greatest fashion moments took place at the BAFTA Awards! Back in 2012, the star wore this beautiful Alberta Ferretti strapless gown, which was simplistic yet perfectly tailored and stunning.

Long before the sheer trend took over the red carpet, Raquel Welch experimented with a half-sheer look in the form of black lace! Her slinky black gown featured lace paneling down the long sleeves and the sides — all the way up to her hip — at the 1995 BAFTA Awards!

Love it or hate it, Saoirse Ronan certainly made fashion headlines at the 2018 BAFTA Awards! The star slipped into this edgy long-sleeved, high-necked Chanel gown that featured a feathered miniskirt atop a floor-length sheer skirt. Her killer Jimmy Choo platform pumps balanced out the risky look, which landed on both best and worst dressed lists alike.

We know it was probably cold in London in February 2003, but that's no excuse to not show off that pretty pink Badgley Mischka dress, Halle Berry! The star kept her fur coat on atop the slinky spaghetti-strap gown while posing for photographers — a move we bet she regrets.

Emma Stone, what were you thinking?! The star attended the 2011 BAFTA Awards in this puzzling Lanvin getup. From the one-shouldered orange top to the dark red pleated skirt and that thick brown belt, nothing matched. We still wonder why she chose this look.

Thandiwe Newton has always been a fashionista. Just look at this phenomenal glimmering gold spaghetti-strap frock she wore to the 2001 BAFTA Awards.

We bet Rachel Weisz would rather forget about this fashion moment at the 2001 BAFTA Awards when she donned this dull, strapless knee-length frock.

Florence Pugh arrived at the 2020 BAFTAs in this very memorable Dries Van Noten creation. The star's getup appeared to be comprised of a simple black minidress underneath a gargantuan frill-filled fuchsia cape-like coat from a collaboration between the designer and Christian Lacroix. From the messy ties down the center to the insanely dramatic train, this one landed the star on many a worst dressed list that year (including our own!).

Julianne Moore wowed in this show-stopping Tom Ford getup at the 2015 BAFTA Awards. From the fitted silhouette to that choker-like detail and plunging neckline, this riveting red number easily became one of the most memorable BAFTA red carpet moments.

Joseph Fiennes served up this strange men's fashion look at the 2000 BAFTAs — a leather trench with red detailing over top a dress shirt, trousers and dress shoes.

Jennifer Lawrence donned one of the strangest looks of the 2018 BAFTA Awards. The Oscar winner's black Christian Dior Haute Couture dress featured a super-sturdy flat bodice that jutted up and away from her chest and a translucent white fabric that wrapped around her back from the edges of the bodice.

Sienna Miller wore a slinky, long-sleeved muted green Emanuel Ungaro gown to the 2007 BAFTA Awards. The embroidery was exquisite, but that low-cut back might have sealed the deal on this memorable red carpet moment.

Okay, so it wasn't a swan dress, but music star Bjork's getup at the 2002 BAFTA Awards wasn't much better: an odd long-sleeved minidress with tights and boots.

Marion Cotillard isn't exactly known for her stellar sartorial selections, so this BAFTA Awards moment isn't a shock. She rocked a strange Chanel minidress with wildly dramatic and excessive fabric dangling from the sleeves in 2008.

Another Chanel disaster at the BAFTA Awards? Alicia Vikander's bizarre feathered frock — which also featured red, blue and white appliques atop a sheer bodice — was crafted by the fashion house in 2014.

We still dream about the stunning vintage Sybil Connolly gown that Gillian Anderson wore to the 2012 BAFTA Awards. The star's strapless confection was the prettiest golden hue and featured unexpected crinkled detailing.

As if! Alicia Silverstone tried to make this pink, red, orange and bronze-striped blouse work with a hot pink skirt for a bizarre red carpet combo at the 1999 BAFTA Awards.

Alicia Silverstone redeemed herself after delivering that disastrous 1999 BAFTA Awards ensemble when she arrived at the same show in 2004 wearing this gorgeous red gown complete with a draped, plunging neckline and a thigh-high slit.

After an awards season where she stuck to dark shades, Renee Zellweger wowed in pale pink Prada at the 2020 BAFTAs. The actress served up this delightful pastel moment that was the perfect balance between sweet and structured.

Daisy Ridley's 2017 BAFTA Awards dress had us thinking of our grandma's old pot holders thanks to its odd patchwork print. We remembered her one-shoulder Roland Mouret gown for all the wrong reasons.

Mischa Barton went to the BAFTA Awards? Yep, in 2006, the star attended and wore this dreamy Marchesa number, which featured one beaded strap, one off-the-shoulder strap, a flower on the bodice and some exquisite draping.

Sigourney Weaver puzzled us with her BAFTA Awards wardrobe choice back in 1998. The star arrived in this funky set that included a simple two-tone gown topped with a striped, patterned kimono-style cover up with three-quarter-length sleeves.

Anya Taylor-Joy's 2018 BAFTA Awards getup was questionable, to say the least. The star arrived in this very sheer Dolce & Gabbana number that basically showed off her briefs with its completely see-through skirt.

Renee Zellweger arrived at the 2006 BAFTA Awards in this classic Carolina Herrera number. With its tiny straps and sleek cut, this glamorous black gown was one of Renee's best style moments.

Kate Hudson had a golden red carpet moment at the 2008 BAFTA Awards in this shimmering Christian Dior confection.

At the 2009 BAFTA Awards, Sharon Stone wowed in a red John Galliano gown that fit her like a glove.

Eva Green's over-the-top, blinged-out Christian Dior gown at the 2007 BAFTA Awards goes down as one we wish we could forget.

Rosamund Pike's 2011 BAFTA Awards look certainly didn't land her on any best dressed lists. The busy Alexander McQueen halter-style gown featured an all-over yellow print that was topped off with a clunky belt that cemented this as one big miss.

It was a high-necked green silk number for Angelina Jolie at the 2003 BAFTA Awards. She wore the pretty Collette Dinnigan design with a very long ponytail.

Carey Mulligan made a fashion misstep in 2010 when she donned this busy black, white and gray floral number by Vionnet to the BAFTA Awards.

Though the white lace confection that Diane Kruger wore to the 2005 BAFTA Awards was pretty with its pale blue bow tied around her waist and a high-low hemline, it was one of the most unflattering looks ever we've seen on the star.

The sparklier, the better! That's apparently what Cate Blanchett's motto was back in 2000 when she donned this sleeveless sequined frock for the BAFTA Awards.

Rooney Mara wore this beautiful neutral Givenchy gown to the 2016 BAFTA Awards. Those textured straps and the subtle geometric print throughout made the star stand out in the design despite the bland hue.

Lily Collins donned this bizarre navy blue Givenchy Haute Couture ensemble at the 2019 BAFTA Awards. From the strangely cropped blazer to the tiered short skirt with a sheer patterned overlay, there was nothing really to love about this look. 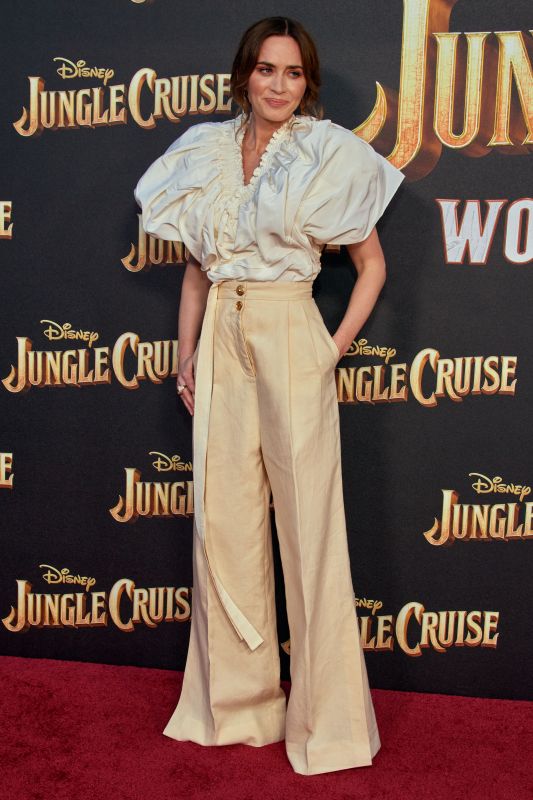