"Shakira, Shakira!" The Colombia-born singer will be performing alongside Jennifer Lopez in the Super Bowl Halftime Show on Feb, 2, 2020, and in honor of the big event, Wonderwall.com is taking a look back at some of her best fashion moments… like this navy blue fringed look she wore during the November 2019 Davis Cup. Whenever, wherever Shakira is, she manages to steam up the spotlight. From the red carpet to her performances and gigs, keep reading to see more of her sexiest looks…

Shakira donned one the most iconic MTV Video Music Awards ensembles ever at the 2001 show — a tiny crop top with low-cut, tight pants and a black headband.

Shakira looked red-hot when she performed at the FIFA World Cup in Rio de Janeiro in 2014. She wore a piece by Charbel Zoe that featured a feathered skirt and see-through bodice. It's hard to believe she was pregnant with her second child, son Sasha, at the time!

At the 49th Annual Academy of Country Music Awards in Las Vegas in 2014, Shakira wore a long-sleeved teal Zuhair Murad gown, and it was a show-stopper. The curve-hugging dress featured an embroidered bodice with nude silk details on her hips. And as we all know, her hips don't lie!

At the 2006 MTV Video Music Awards, Shakira looked like a goddess during her performance of "Hips Don't Lie" in a matching pink bandeau top and skirt. She added intrigue with jewels that dripped down her midriff.

At her "El Dorado" album release party in 2017, Shakira stunned in this mosaic-style golden minidress. She paired the sparkly little frock with tan heels.

At the 2014 Billboard Music Awards, Shakira wore a blue long-sleeved Julien Macdonald dress. She showed some skin thanks to the sheer paneling but skipped jewelry so she didn't detract from the dazzling dress itself.

For her performance of "Can't Remember to Forget You" during the Echo Music Awards in Berlin in 2014, Shakira made sure no one would forget what she wore. She spiced up her black embellished leotard look even more with fishnet tights and heeled boots.

During the 2010 MTV EMA Awards in Madrid, Shakira made jaws drop when she performed in a studded bra and fringed silver pants. While she sang "Loca" and "Waka Waka," the only "loca" things we could think about were her abs!

Shakira showed some skin in little black dress featuring small cut-outs during a 2014 photocall to promote her album "Shakira" in Barcelona. She paired the dress with over-the-knee Christian Louboutin boots.

Shakira wore a gold high-low look for the 2001 Grammy Awards. The metallic gown and those boots perfectly matched her golden curls too.

During the AFI Film Festival in 2007, Shakira wore a wild look to the premiere of "Love in the Time of Cholera." She rocked a cheetah-print dress with a gold bow and matching gold shoes for her walk down the red carpet.

Leave it to Shakira to make her arms stand out too! She wore a short sequined Herve Leger bandeau dress with just one matching arm warmer at the 2009 American Music Awards. Just as she did at the MTV Video Music Awards the same year, she completed her look with tall black boots.

Shakira looked like a gift in a glittering and corseted gold minidress featuring a sweetheart neckline and a bow as she arrived at the NRJ Music Awards in Cannes, France, in 2012. She added shimmering silver heels to complete the ensemble.

Shakira showed the crowd how to shake it at the Glastonbury Music Festival in 2010. She kept her outfit simple — a knotted graphic tank top that showed off her amazing abs, plus a a skirt fit for belly-dancing worn over black pants.

In 2011, Shakira performed live at Palais Nikaia during her "The Sun Comes Out" world tour stop in Nice, France. She was shining bright in a gold crop top that showed off her trademark toned abs.

In March 2014, Shakira sparkled in a glittering silver top at the iHeartRadio release party for the exclusive deluxe edition of her self-titled album in Los Angeles. The top made her casual black pants look anything but, and a multichain necklace completed the dazzling look.

Shakira put a sexy spin on the LBD at the NRJ Music Awards in Cannes, France, in 2011 in an Azzedine Alaia mini featuring exquisite beading and a ruffled hemline.

Shakira looked sexy in a silver Versace gown at the Whitney Museum of American Art gala and studio party in New York City in 2009. 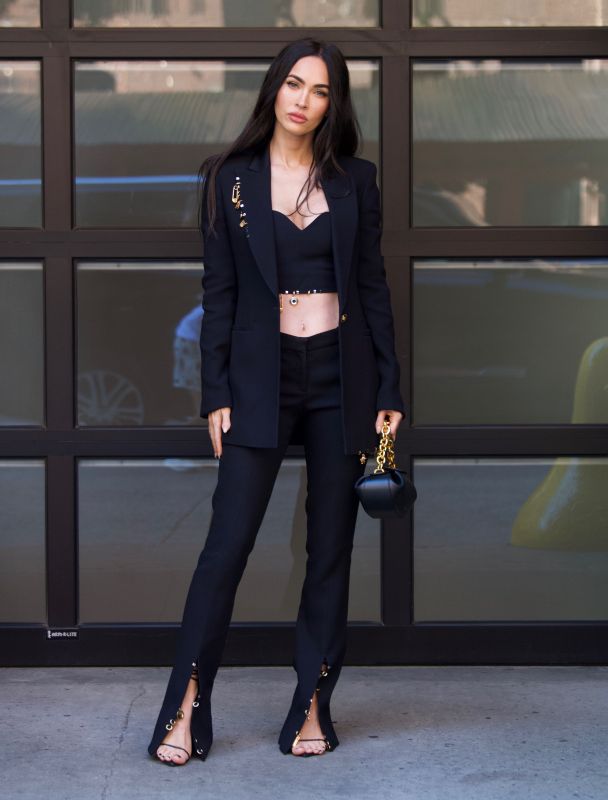