Kourtney Kardashian and Younes Bendjima spent the last few weeks flaunting their love on vacation in Italy. But like most celebrity couples, the gossip media often targets them with false stories. Below, check out five wrong rumors about Kardashian and Bendjima from the last six months. 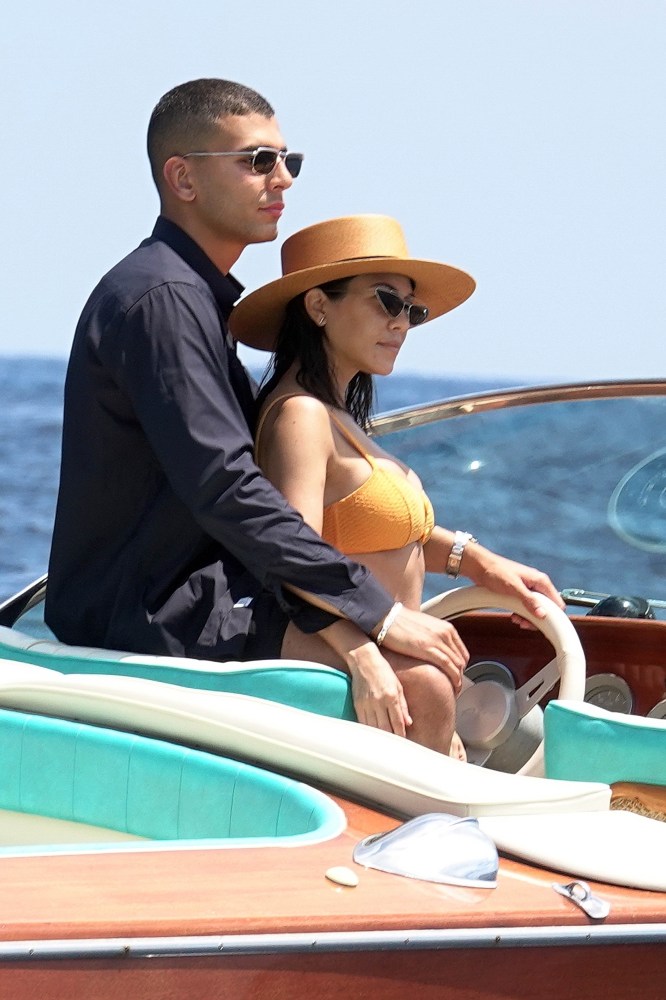 In January, OK! Australia published a cover story announcing Kardashian and Bendjima had a "secret beach wedding" in Mexico. It was alleged the couple had a "hush-hush" ceremony while the world was fixated on the wait for Kim, Khloe and Kylie's new babies. A so-called "insider" claimed the nuptials consisted of just "him, her and a celebrant on the beach, with no cameras around." Yet the tabloid's cover featured a picture of what appeared to be Kardashian in a bridal dress, and an aerial shot of a wedding. This was a deliberate choice to deceive readers and make them think there was photo evidence of the purported ceremony. But as Gossip Cop revealed, the snapshot of Kardashian was from her role as a bridesmaid at Kim's 2011 wedding to Kris Humphries, and the picture of the beach wedding was from when Amber Heard and Johnny Depp tied the knot on a Caribbean island in 2015. No wedding between Kardashian and Bendjima really took place.

In March, RadarOnline claimed that following a "breakup" with Bendjima, Kardashian and Travis Barker were a "new couple." It was said Kardashian and Bendjima were "on the outs," and "no one is happier about the news" than Barker, who supposedly thought he "missed his chance" to pursue her. But while the site claimed the rocker wanted to now "ask her out," a rep for Barker told Gossip Cop the narrative was "100 percent not true." He and Kardashian have been neighbors for years, but nothing more. It was also evident that the "KUWTK" star wasn't even single, as Kardashian and Bendjima were seen bowling with her kids just days prior.

The blog was up to no good in April, too, when it wrongly accused Bendjima of cheating on Kardashian. Using paparazzi photos of the model standing next to Camila Morrone, the website maintained he was "caught showing some shady PDA." Asked the online publication, "Is this the beginning of another Kardashian cheating scandal?… Could it be he's got a wandering eye just like Tristan Thompson?" As Gossip Cop pointed out, RadarOnline's storyline was inspired by the Daily Mail, which was the first to claim he was out with "mystery ladies." But Bendjima himself set the record straight, writing on Instagram, "Where are the 6 others mens i was with? What you guys trynna do? Nice cut tho you piece of [expletive]." Though Bendjima shot down the cheating rumors and explained how the cropped pictures were misleading, the site never bothered to issue a correction.

Continuing its streak, RadarOnline peddled more misinformation in May, contending Bendjima was "blasting" Kardashian for taking risqué photos. "Younes is way more conservative than he looks," an untraceable "source" asserted, alleging he objected to Kardashian's "incessant need to strip down all of the time." The questionable insider insisted, "He's openly saying she needs to tone things down if she wants things to last with him in the long term." The outlet, however, failed to mention that just a month before, Bendjima willingly stripped down with his girlfriend for a Calvin Klein ad Kardashian posted on Instagram. Gossip Cop further discovered that Bendjima's management company featured his modeling portfolio online, in which he poses in a number of photos without clothes. It couldn't be more obvious then that he has no problem with sexy images.

In June, OK! decided to spread fake news of its own when it wrongly led readers to believe Kardashian and Bendjima had gotten married in Rome during their vacation. The tabloid wrote on its website, "Kourtney has been sharing photos from her trip all over social media, which included a major wedding snap that was a 'blink and you miss it' kind of thing on her Instagram stories." After asking three separate times if they had wed, the magazine admitted three-fourths of the way into its article that Kardashian had actually posted a picture she had taken of "another couple's wedding." But rather than telling fans the truth from the get-go, the publication instead opted to go the clickbait route. In contrast, Gossip Cop observed that People reported in a straight-forward manner that as Kardashian documented her Italian vacation, she "played wedding photographer, snapping a just-married couple outside the landmark."

Kardashian and Bendjima's romance initially started out as a casual fling, but the couple has now been together for more than a year and steadily grown more serious over time. Whether they'll continue to go the distance remains to be seen, but whatever happens, Gossip Cop will keep calling out the wrong rumors as necessary.

Miley Cyrus, Liam Hemsworth did NOT "split for second time," despite report