A couple of new reports assert Ellen DeGeneres has been "plotting a split in secret for months," and is now ready to call it quits with her wife, Portia de Rossi. Gossip Cop looked into the claim, and we can exclusively correct it. Not only are we told it's 100 untrue, but DeGeneres herself has shot down talk about her and de Rossi divorcing. 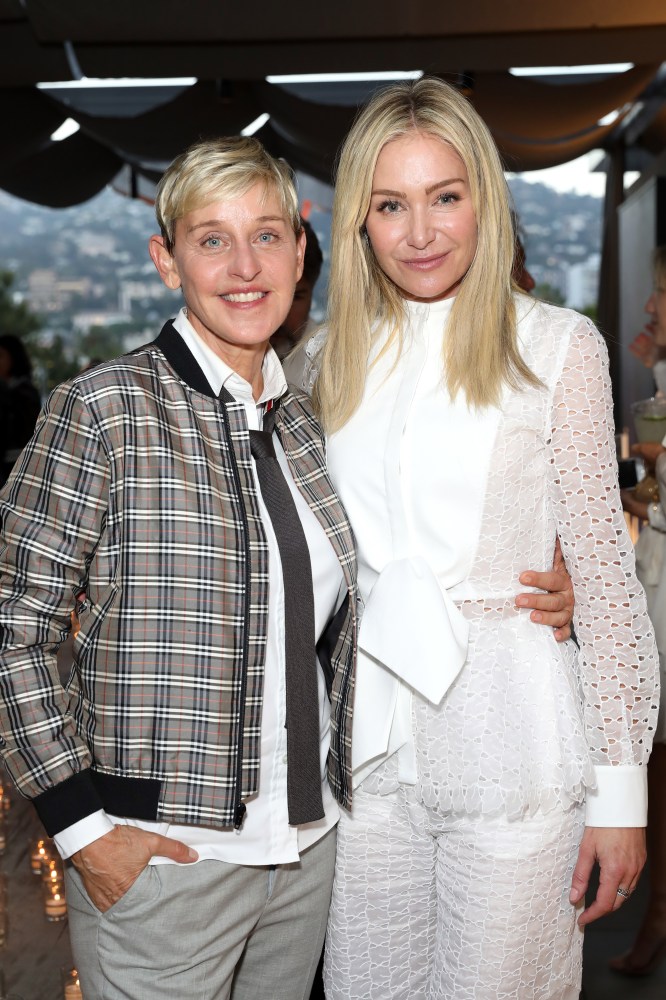 According to Star, DeGeneres and de Rossi's "decade-long marriage has been hanging by a thread" for some time now, and it appears the talk show host has been "plotting her escape for months." The tabloid alleges DeGeneres secretly bought a multimillion-dollar home "behind her wife's back." Both the magazine and its sister site, RadarOnline, which picked up the story, quote an unnamed, untraceable and possibly made-up "source" as contending the home is where DeGeneres will live after leaving de Rossi.

Curiously, the two outlets ran several of the same quotations from its anonymous and possibly manufactured "source," but altered them slightly so that they aren't exactly word-for-word. In the magazine, for instance, the tipster says the new house is "where she's moving as she rebuilds her life after Portia." But the blog has the "source" say, "This is Ellen's bachelorette pad for rebuilding her life after Portia." Of course, if the insider were real, it would be very strange for him or her to give two different versions of the same phrase.

Moving past those inconsistencies, and that the magazine reports the women are headed for a "$450 million divorce," while the website pegs it at a "$400 million divorce," the alleged "source" in both outlets maintains DeGeneres and de Rossi's marital issues stem from the daytime host supporting Kevin Hart after a series of his homophobic tweets were uncovered. Of course, it wasn't true a month ago when Star claimed DeGeneres and de Rossi were getting a divorce because of the talk show host defending Hart, and it's no more true today. As noted then, a day after DeGeneres' TV interview with Hart, de Rossi posted a photo on Instagram of her and her wife holding hands while horseback riding.

Another reason DeGeneres is supposedly secretly moving out, alleges the blog and its sister publication, is that de Rossi wanted to adopt a kid, but her wife didn't. This false narrative has been around for years. Actually, DeGeneres has debunked it herself.

In an interview with the Daily Telegraph in June 2016, DeGeneres said she and de Rossi were on the same page about not having kids early on in their relationship. "We like our conversations not being interrupted and our furniture without sticky grape juice on it," explained the talk show show. And in DeGeneres' expansive interview with the New York Times in December, she further dismissed the untrue tabloid tales about them. "I hear Portia and I are divorcing every other week or having a baby or whatever," said DeGeneres.

While the tabloid and RadarOnline's information comes from an unaccountable "source," DeGeneres herself has busted these falsehoods. Equally significant, she hasn't bought a secret home that she'll escape to after leaving de Rossi. The couple's marriage is 100 percent fine, a mutual friend of Gossip Cop and DeGeneres assures us.

In fact, as of us writing this article, de Rossi posted a video on Instagram from Rwanda, where she helped open the "Ellen DeGeneres Campus" to help save the gorillas in the region. In the video, de Rossi showed an image of a heart DeGeneres sent her because she couldn't be with her wife for the groundbreaking of the gorilla refuge. Clearly, DeGeneres is not "plotting a split in secret," and instead the two remain in love and happily married.

Jennifer Lawrence Planning Summer Wedding In Kentucky And A Baby?