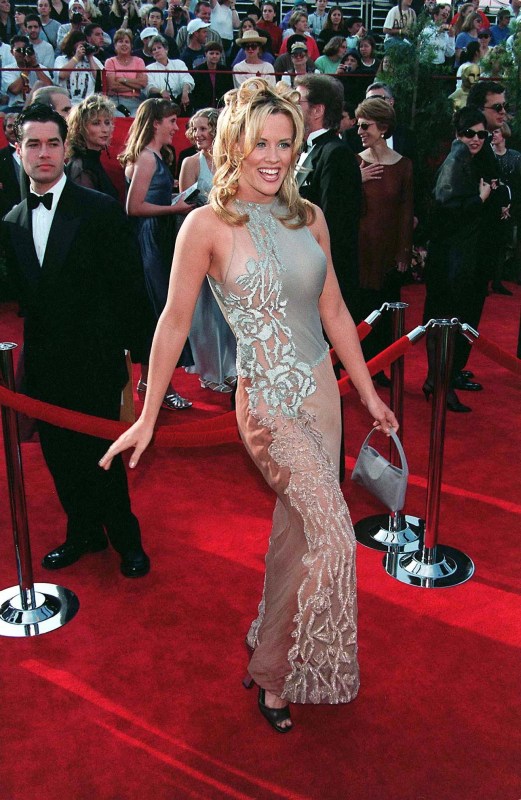 Hey, remember that time when Jenny McCarthy was invited to the 1997 Academy Awards for the first and only time?

Well, she does, but it has nothing to do with the movies or the hobnobbing with A-listers. It was there that Jenny had the biggest fashion disaster of her career — really, it was a self-inflicted problem.

"I just remember dying a little bit," she told Us Weekly, recalling the evening.

"[I] walked the red carpet, went to the Vanity Fair party, felt like a million dollars," she said, "but I did wonder why it was so tight in the chest all night."

That evening, she saw the legendary designer and thanked him for dressing her, to which she remembers him plainly telling her, "You're wearing my dress backwards."

"He didn't think it was as funny as I did," he said. "I just said, 'I'm sorry, Valentino.' Needless to say, I've never been dressed by Valentino again."

Jenny has long been an open book about her life, for better or for worse. Sometimes, too, that means getting real.

Earlier this month, she opened up for the first time about a verbally abusive relationship she was once in. She refrained to say who the relationship was with or when it occurred, but said it lasted four years.

"What I thought was gonna be a typical relationship, turned into a relationship that you would never think you would get yourself into. Especially me," she said. "I mean, I really consider myself to be pretty strong-willed and confident, even back then. But I did find myself being slowly manipulated into a very, very dark, abusive — verbally abusive — relationship that could have easily killed me."

She continued, "I found my accountability in the hell I was living in. The path to loving yourself requires you to stop putting the blame on others and observe the choices you make that got you there. It wasn't his job to love me. It was mine. So I chose to finally get the hell out of that relationship. I chose to be powerful, not powerless."