Kelly Ripa was never about to quit "Live" because of Kim Kardashian, despite a claim last year. At the time, it was alleged the host saw it as an "insult" that the reality star was filling in for her. Gossip Cop busted the untrue story 365 days ago, and it's now clear our reporting was right. 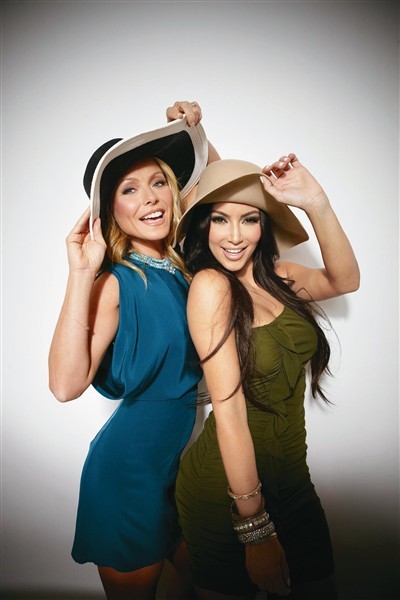 On August 23, 2017, after it was announced that Kardashian would be a guest co-host on "Live with Kelly and Ryan" during Ripa's vacation, we called out Celeb Dirty Laundry for running a story with the headline, "Is Kelly Ripa About To Quit 'Live' – Being Replaced By Kim Kardashian An Insult?" The site claimed Kardashian's gig gave "further credence to the rumors" Ripa was "on her way to quitting the show permanently." It was alleged the former daytime soap star had become "incredibly unhappy" with the talk show, due to Ryan Seacrest supposedly "upstaging her and being treated with more deference than she was."

And Kardashian taking Ripa's place for one episode was painted as the "latest snub" against her. Argued the blog, "It's one thing to have a major celebrity step in for you, and it's another to have someone like Kim Kardashian — a waning reality star — step in for you." Of course, nothing about Kardashian's career was "waning," and the website also brought up the fact that Kardashian had previously guest co-hosted alongside Ripa herself, but discounted that by merely asserting that "things are different now."

"With all the drama occurring behind the scenes, and Kelly Ripa's alleged frustration and professed unhappiness with the way the show is being run, it's not a stretch to assume that she's on the hunt for a new hosting gig," insisted the outlet, which even asked readers, "Do you believe that Kelly Ripa is on the verge of quitting 'Live,' especially after hearing that Kim Kardashian will be replacing her alongside Ryan Seacrest on an upcoming episode?"

But as Gossip Cop rightly reported then, Ripa was not "on the verge of quitting" over Kardashian or any other reason. The story was simply made-up to capitalize on the attention Kardashian's hosting stint was getting, as well as to exploit untrue "rumors" about Ripa being "unhappy" with the program. Days after our debunking, Kardashian filled in for Ripa without issue.

What's more is that Ripa herself later proved she had no problem with Kardashian by having the "KUWTK" star back as a guest on "Live" this past May (see photo above). And now a full 12 months have gone by since this narrative was peddled, and Ripa still hasn't quit the show. In fact, official video from an episode this week shows Ripa is still in her usual seat next to Seacrest. She will continue to be for the foreseeable future.

Britney Spears NOT "Snubbed" By Meghan Markle And Kate Middleton, Despite Reports