Did Gwen Stefani give Blake Shelton an ultimatum to get fit or she'll dump him? That's the ridiculous claim in one of this week's tabloids. Gossip Cop can debunk the bogus story. 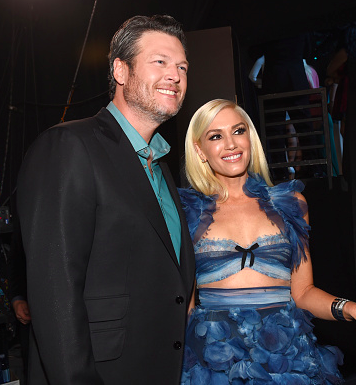 An article in the latest issue of the National Enquirer says the singer is sick of her boyfriend packing on the pounds, and is threatening to end their relationship if he doesn't get in shape. A supposed source tells the magazine, "Gwen adores Blake, but she demanded he hit the gym or hit the highway."

According to the supposed source, the primary reason Stefani is concerned about her boyfriend's health is because she wants to have a baby with him, but fears he won't be healthy enough to care for their child. "Gwen is furious that Blake doesn't take better care of himself, creating the possibility he may not live long enough to see their child grow up," says the questionable tipster, who further contends Shelton's diet consists of steak, fried chicken, mac and cheese and vodka.

The seemingly phony insider goes on to say that Shelton isn't taking his girlfriend's advice, and has "already made it clear that he'll do his part as a dad," but "didn't sign up for fitness training." The so-called "source" adds, "She knows it's late in life for both of them to bring another child into their lives. She just wants to make sure that Blake takes care of himself for them to raise a family from middle age to late in life."

After maintaining that Shelton refuses to get into shape, the "insider" then backpedals by saying the country star has been "dieting and occasionally hitting the gym to keep Gwen happy." The seemingly nonexistent tipster concludes, "Blake's giving it his best shot. But everyone knows that if he's on tour and Gwen isn't around, he's not going to pass up a beer and a burger."

The magazine's story, which is full of contradictions, is also based on claims from an anonymous and untraceable "insider." Gossip Cop, however, checked in with Stefani's spokesperson, who tells us on the record that the article is completely "untrue." Despite what the publication's "insider" claims, the rep, who's qualified to speak on the singer's behalf, assures us she never gave her boyfriend a fitness ultimatum.

In fact, Stefani told "Entertainment Tonight" in 2017 that Shelton is the one who encourages her to go to the gym. While talking about exercising with her boyfriend, the singer noted, "It's because of him that I worked out this morning. I wasn't gonna work out… He's my trainer." Additionally, there's nothing to indicate the couple is planning to have a baby in the near future. Stefani will be performing her Las Vegas residency through November, so it's clear she doesn't plan on carrying a child anytime soon.

It's worth noting, this phony narrative isn't even original. Gossip Cop busted the Enquirer back in December 2017 for falsely claiming that Stefani ordered Shelton to lose weight or risk losing her. We also debunked the supermarket tabloid's sister publication, the Globe, when it alleged in July that Stefani was worried Shelton was too unhealthy to have a baby. The premises weren't true then, and there are no more accurate now.

Lady Gaga, Irina Shayk Got Into Fight Over Bradley Cooper At Golden Globes?

Jennifer Aniston Desperate To Get A Date For The Oscars?