One of this week's tabloids claim Jimmy Kimmel's wife, Molly McNearney, is upset about his close friendship with Jennifer Aniston. The story is completely false. Gossip Cop can exclusively debunk it. 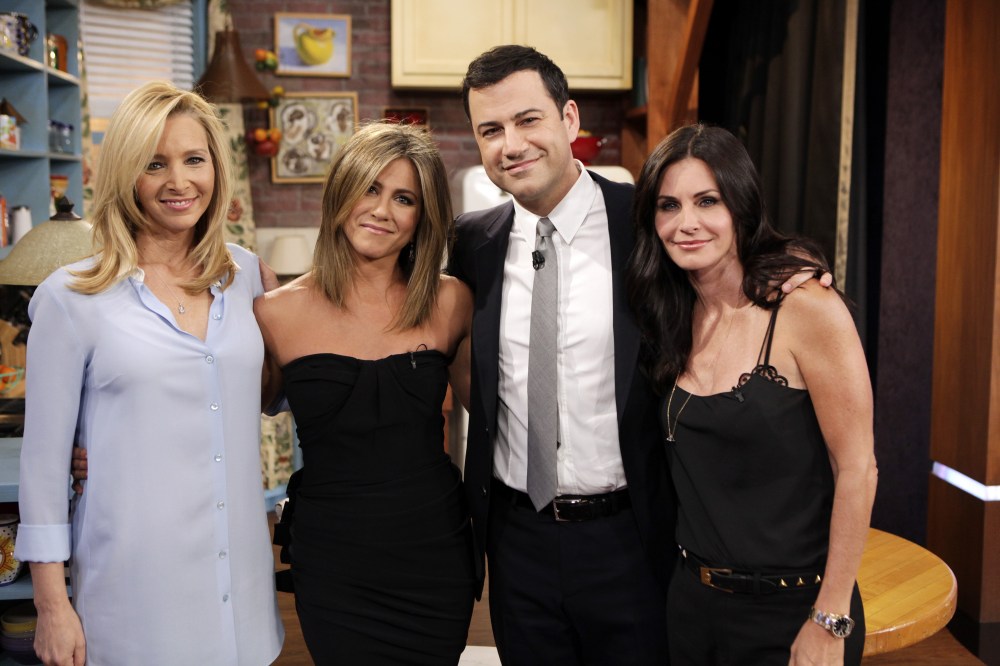 Aniston celebrated New Year's Eve with Kimmel, his wife and several other famous friends during a trip to Jackson Hotel Wyoming. According to Woman's Day Australia, however, the talk show host's wife isn't happy about the actress "hijacking her husband." A supposed source tells the magazine, "There's been some tension between Jen and Molly and it got worse at Jackson Hole."

The alleged insider continues, "Molly is sick of Jen hanging out with them all the time, and she certainly doesn't like it when Jen and Jimmy go off by themselves. Jen definitely sucks up to Jimmy and ignores his wife most of the time. She probably doesn't even realize she's doing it, but it annoys Molly to no end." The questionable tipster further implies that McNearney believes Aniston could end up stealing her husband, so she let it be known that the two "need to cool it with the friendship."

Nothing about the tabloid's story is remotely accurate. In reality, Aniston is friends with Kimmel's wife as well, despite the magazine trying to make it appear as if she only has a relationship with the talk show host. In fact, Aniston cast McNearney in her new Netflix movie Dumplin'. The actress praised her pal's performance during an appearance on "Jimmy Kimmel Live" last month. The talk show host and his wife also attended the film's premiere in Los Angeles.

Additionally, McNearney wrote Aniston's September 2018 InStyle cover story. When Kimmel's wife jokingly kicked off the interview asking the actress back-to-back questions about Brad Pitt and Justin Theroux, Aniston responded, "You're the only person who could start an interview like that and actually send me into hysterics and not hives." It's clear the two women are very close.

In addition to all of the evidence disproving the magazine's article, Gossip Cop also checked in with Kimmel's spokesperson, who tells us on the record that the story is "untrue." Despite what the outlet's anonymous "source" says, a rep qualified to speak on the talk show host's behalf assures us his wife isn't threatened by Aniston. The publication's claim otherwise is baseless.

Woman's Day is the same unreliable outlet that falsely claimed last summer that Aniston had secretly married Pitt again. When that narrative didn't pan out, the tabloid threw the actress into nonexistent romances with Leonardo DiCaprio, Murder Mystery co-star David Walliams and even her "divorce lawyer." This latest article involving Kimmel and his wife is more nonsense.