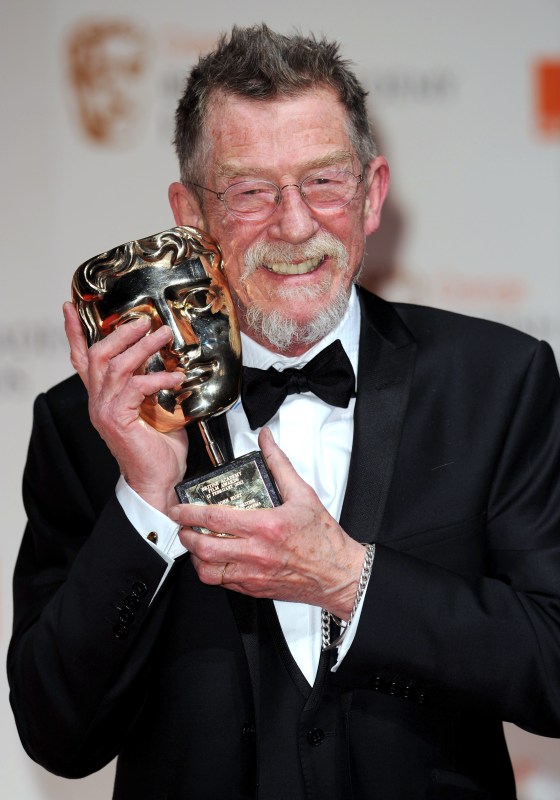 Celebrities are reacting to the death of John Hurt. See stars' reaction tweets and tributes below.

Hurt died on Jan. 26, just days after turning 77 years old. Though no cause of death has been officially announced, the actor had been suffering from pancreatic cancer since 2015. That same year, he was knighted by Queen Elizabeth.

Hurt had a number of memorable projects over the years, but perhaps none more so than "The Elephant Man," for which he was nominated for an Oscar. He also scored an Academy Award nomination for "Midnight Express," for which he won a Golden Globe and a BAFTA. Other noteworthy credits include "Alien," "V for Vendetta," "Hellboy," "Doctor Who" and, most recently, "Jackie." Hurt was also part of the "Harry Potter" franchise, portraying wand-maker Ollivander.

Now many stars are honoring Hurt on Twitter and expressing sadness over his death. Elijah Wood tweeted, for instance, "Very sad to hear of John Hurt's passing. It was such an honor to have watched you work, sir."

"Dance until your feet hurt. laugh until your face hurts. Act until your John Hurt. #RIPJohnHurt," posted Dominic Monaghan.

Kumail Nanjiani expressed, "Oh no. RIP John Hurt. He made everything he was in better. I was looking forward to seeing many more performances."

And, sharing a film still, Avan Jogia offered, "On the passing of John Hurt, a wonderful actor, and the recent seismic shift in our geo-political landscape, I give you V for Vendetta."

Kiefer Sutherland posted, "My deepest sympathies to John Hurt's family, friends and fans. He was a dear friend."

And in two tweets, Mel Brooks wrote, "It was terribly sad today to learn of John Hurt's passing. He was a truly magnificent talent. No one could have played The Elephant Man more memorably. He carried that film into cinematic immortality. He will be sorely missed."