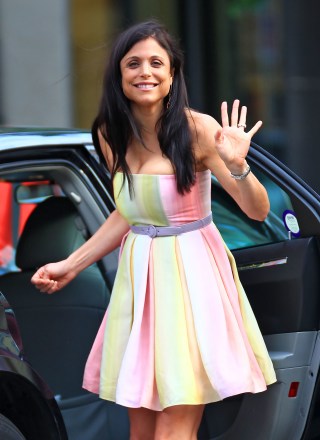 The early years of Bethenny Frankel, the only child of legendary horse trainer Bobby Frankel, who walked out when she was 4, were filled with alcohol abuse, violent fights, an unhappily remarried mom, eating disorders, obsessive dieting and constant relocating. After graduating from NYU in 1992 with a degree in communications and psychology, she pursued acting in LA. When that didn't pan out, she dabbled in event planning and pashmina design. She returned to Manhattan in 2001, attended the Natural Gourmet Institute, founded health-conscious cookie company BethennyBakes, made it to the finale of 2005's "The Apprentice: Martha Stewart," wrote a monthly column in "Health" and joined Bravo's "The Real Housewives of New York City" as the token single girl in 2008. She didn't stay solo long. By season 3, her boyfriend/businessman Jason Hoppy became a show fixture and after dating less than a year, they were engaged and expecting. A lavish Four Seasons wedding, her "Housewives" spinoff and the birth of daughter Bryn followed in 2010. Meanwhile her food and lifestyle company, Skinnygirl, became big business, bolstered by four bestsellers she penned including "Naturally Thin" (2009) and "A Place Of Yes" (2011) and the $100-million acquisition of her line of pre-mixed low-cal margaritas by Fortune Brands. Her Hoppy marriage failed in 2012, but once again picked herself up with work launching her syndicated talk show "Bethenny."