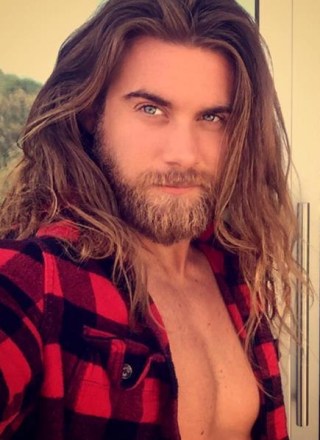 Share Tweet Pin Email
Brock O'Hurn is a 6-foot-7 Instagram personality known for his luscious locks and shirtless selfies. He took the Internet by storm in November 2014 when he posted a video of himself pulling his hair up into a man bun. Despite its simple concept, the clip quickly racked up more than 5 million views on Facebook. Since then, Brock — who was born on Aug. 19, 1991, and has been dubbed "The King of Man Buns" — has built a following of more than 1.8 million on Instagram and collected nearly 800,000 likes on Facebook. When he isn't too busy teasing us with photos, he's either working as a personal trainer or running his jewelry line, Ebb and Flow. The Los Angeles-based social media star has dreams of turning his digital success into an acting career, but he wasn't always so buff and confident. He actually started working out during his sophomore year of high school because he was sick of having low self-esteem and wanted to gain some muscle to help out with that. Survey says, he nailed it.