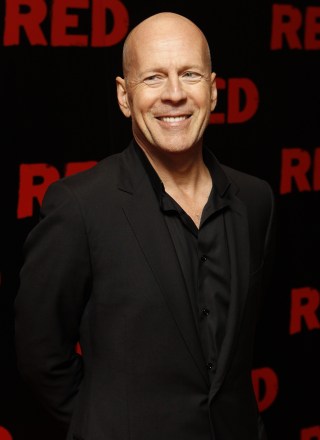 Share Tweet Pin Email
After dropping out of college, Bruce Willis moved to New York to find fame but it took 10 years of partying, bartending and off off Broadway work before he finally booked ABC's Moonlighting (1985-89). In 1987, after dating for several months, Willis married Demi Moore in Las Vegas hotel suite and less than a year later, and just a month after the debut of Die Hard, the film that arguably set the course for the rest of his career as a badass, the first of their three daughters (Rumer, Tallulah and Scout) was born. He raised his family in Hailey, Idaho, (where he now owns almost $10 million in investments and real estate) and continued to reside there after they divorced in 1999. While he was never wanting for middling work, it seems like every couple of years he nabs at least one role worth his big paycheck (Pulp Fiction,Twelve Monkeys, The Fifth Element, The Sixth SenseThe Whole Nine Yards, Moonrise Kingdom, Looper). To be fair, he does a lot of good with the bloated bank account — sending Girl Scout Cookies to troops, buying property in his crumbling hometown, donating his Friends paycheck to several charities. He was also the picture of decorum post-divorce, even attending Moore's wedding to Kutcher and guesting on That '70s Show. They returned the favor in 2009 when he went back on his no-marriage vow with 30-year-old model Emma Heming. At 57, he returned to diaper duty when daughter Mabel Ray was born.