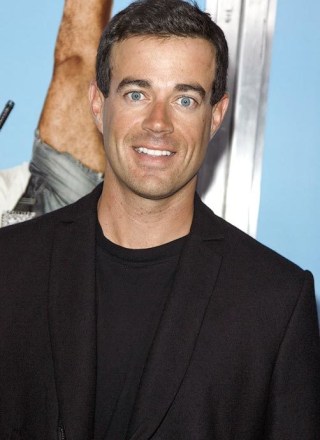 Share Tweet Pin Email
Considering how many hours Carson Daly has logged with gluttonous rock stars, it is hard to imagine that the all-American blue-eyed babyface grew up planning to be a priest. While a theology student with a partial golf scholarship at Loyola Marymount University, he locked down an internship at a Palm Springs radio station and eventually worked his way up to DJ. Other radio gigs in San Diego and San Francisco before he returned to the SoCal airwaves on KROQ. MTV stole him away to be a VJ and branded him the top teen tastemaker as the host of "Total Request Live" from 1998-2003. He has since emceed New Year's Eve specials for MTV and NBC, a WWE troop tribute, awards shows and his late-night series "Last Call with Carson Daly," which shifted his focus to music fans with more indie and mature tastes. He can now be see weekly as the host of the hit singing competition, "The Voice." The ex of Tara Reid and Jennifer Love Hewitt now has two children, Jackson and Etta (born appropriately on the night of MTV's 2012 Video Music Awards), with girlfriend/food blogger Siri Pinter.